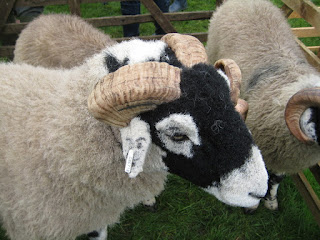 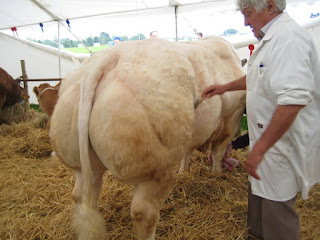 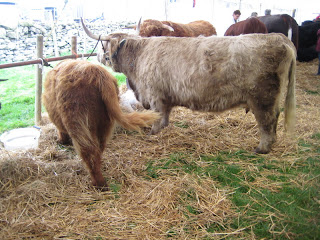 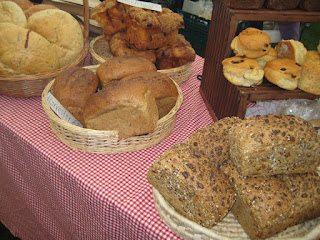 There were too many photos for yesterday so here are a few more.

For the first time there was a "Food in Yorkshire" tent featuring only food produced and made in Yorkshire. Cup cakes seemed very popular, as did home made bread, which all looked so good. I bought a honey and sunflower loaf and presented it to the farmer for breakfast this morning. When I asked him if he had enjoyed it he remarked that it was alright for birds he supposed! (we buy sunflower hearts for our wild birds).

I didn't show you all of the cattle. There was a section for Highland Cattle; always a poplar class with visitors. They always seem so docile, although I understand that cows can be very nasty when they have a calf. There was also a section for beef breed bulls. The one in the photograph - a Belgian Blue (yes, I know it is cream) has such a large back end that he is almost deformed. I can only image what his progeny would be like, although it is a fact that many Belgian blue cows have to have calves delivered by caesarean section. However, he won his class. He looked quite docile as he was walked round the ring on a rope through his nose but it did occur to me that if he wished to break loose the farmer would have been quite unable to hold on to him.

The other photograph is of a really good example of a Swaledale sheep - showing the white ring around the eye and the good white nose. The horns are so curly that quite often the horn has to be sawn off to prevent it growing into the side of the animals face - or even its eye.

Today they have begun to clear the show field (it is only at the top of our lane). I can only imagine the state of the ground as there was half an inch of rain yesterday evening. Then the farmer who owns the fields has to try and get them back into some sort of shape before the winter. Good luck to him.

Thanks for your two show posts - I haven't managed to get to any shows this year, so am bereft lol I love getting up close to the animals and talking tot heir owners - so much knowledege and always happy to talk about them, sheep being my favourite :) Great photos.

The Belgian Blue bull does look almost deformed - it bothers me when breeding programmes alter animals so much. Love the Swaledale and the bread looks excellent - sunflower seed bread is one of my favourites. Typical male remark by the farmer! Thankyou for sharing your photos with us - I feel as if I had been there myself.

Love all the animals, but I especially would love the scones. They sell what they call scones over here but they're definitely not the real ones.Haven't had a decent scone in several years.

Thank You for part two !
I think the sheep are wonderful.

Thank you for 1 and 2! Did you know that Highland Cattle were predominantly black until good old Queen Victoria popularised the red ones?

And love the Swaledale. Quite disturbed by the bull - a step too far, I think.

Thanks for part 2. I just love that sheep - I was fascinated by the breeds of sheep in the north of England and Scotland - so very different from the merinos I grew up with. Cheers

Great array of photos and it was nearly as good as being there. I feel the same way as you about the Belgian Blues. It seems a shot in the foot if farmers have to pay for a Caesarean for the birth though - surely there is a limit to how many calves a cow can have thus? (As with human Caesareans?)

Hi Weaver of the Grass, thanks for visiting my blog and leaving the message, I drop in very often to read yours and enjoy your posts very much.

I'm one of those with whom the Highland cattle are popular! Not sure what it is about them, but they do recommend themselves to me. These two posts reawaken memories of past shows I've attended. They do not seem to have changed much.