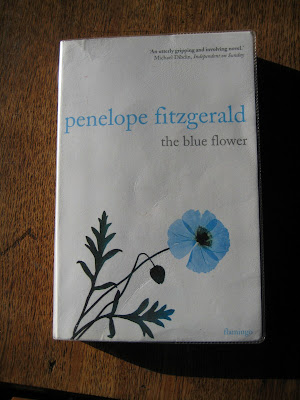 In between watching various bits of the Olympics (three golds and two silvers today as I write), I have read several really good books this week. The one I am reading at the moment is 'the blue flower' by Penelope Fitzgerald, who died in 2000 at the age of eighty-three, having not started her literary career until the age of sixty.

The novel is based on the life of the poet Novalis who only lived to be 28 and died of tuberculosis, that killer disease which lasted well into the twentieth century. What is fascinating about Fitzgerald's book is that the work is based on his surviving works, letters, diaries and official and private documents - so it is a pretty authentic view of what life was like in the late eighteenth century.

The book opens with the yearly wash day at the house he is visiting. His own household manages to wash three times a year, so that the household only has linen and white underwear for four months. But here, in the house he is visiting, everything is washed once a year - he talks of "great dingy snowfalls of sheets, pillow cases, bolster cases, vests, bodices, drawers" - all hanging from windows or being carried out into the garden in giant baskets by the servants.

Later on we learn that the family sleep in their clothes and only wash under the pump in cold water. And this is only the first chapter! And these are relatively rich people!!

I have looked up Novalis's poetry - I had never hear of him. Of course, poetry always loses something in translation doesn't it, but even allowing for that, it seems very dated to me. But the book 'the blue flower' is fascinating stuff and I do recommend it if you want a good read.

And speaking of poetry, another poem which I found this week, is 'The Sunlight on the Garden' by Louis McNiece, the Irish poet who died at the relatively young age of 56 in 1963. I came across a mention of the poem and looked it up on line. It's a poem about betrayal and its after effects. After several readings I began to really love it. If you have a minute go on line and have a look at that too.
Posted by The Weaver of Grass at 11:02

I know that some of the Cambridge colleges had no washing facilities because the terms were only eight weeks long which was not considered a sufficient time to get dirty!

pat ... you forgot 1 bronze!
love the dust jacket on the book!

Pat, apropos the great unwashed you might also enjoy Part 1 of The Road to Wigan Pier (G Orwell).

The Blue Flower sounds fascinating. I have often wished I knew what daily life was like at various times in history.
I am pleased to read that you had to read a poem several times before you began to like it - I struggle with quite a lot of poems and have to read some many times before I understand them.

Well, Novalis was writing in the late 18th century, Pat! The blue flower symbol is incredibly important and resonant within German Romanticism.

Thanks Robert for that information. Thanks to you all for visiting.