Progress notes on the sick heifer. 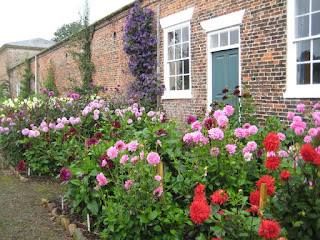 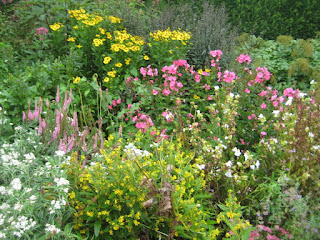 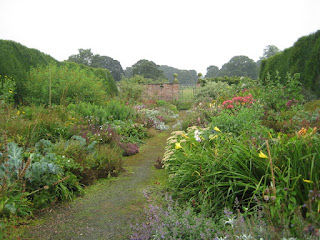 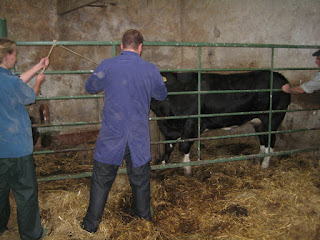 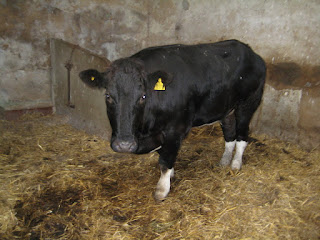 Last week I wrote of a sick heifer who seemed to be about to abort her calf. The vet gave her various injections and told us to keep her in the barn. Well we have done so but after a week there is really no improvement in her condition and she certainly has not aborted the calf. So this afternoon the vet called again.

She became very distressed and really very dangerous too as they attempted to get a halter on to her so that the vet could examine her more closely. At one point I retreated to the safety of outside and took photographs through a crack in the door. The vet had a trainee vet with him - a lovely young lady who must have weighed all of eight stone and was very slightly built too. It didn't seem to put her off!

The vet is still unsure what ails the heifer. Her temperature is now normal and the calf seems to have settled down again - so now he is investigating infection as the cause and has pumped her full of antibiotics. We shall have to await developments now but I must say that she was quite terrifying when she panicked and roared and I was glad to be outside looking in.

On a more peaceful note - yesterday my daughter in law and I paid a visit to Norton Conyers garden, which was open to the public for a couple of hours in aid of the local hospice. The weather was not the sort to encourage people to go because it was pouring with rain. But around twenty hardy souls turned up to wander round the garden and take tea and cake in the lovely orangery. It was very enjoyable - the garden was lovely and there was a kind of Dunkirk spirit amongst the viewers.

We treated ourselves to an ice cream on the return journey - a reward for being stoical.

Poor heifer - I do hope she will be alright and give birth safely.
Those gardens are beautiful regardless of the weather. Sometimes we need to make that sort of outing to cheer a dismal day and tea and cake is always cheering - not to mention icecream!

Pat... we had a bit of the Dunkirk spirit up at Prom Art on Sunday...paintings in and out of the car....madness...but a good day in the end. So sorry about the cow.I hope that it will all be good in the end.

she looks a little sad does she not?
good luck with her

What beautiful garden and what a treat, weather and all.

Like any pregnant Mum I think she is not feeling well and stressed. Then to have people pushing and poking her, I would be angry too.
I hope she is feeling better soon. Thanks for the update.

Hope the heifer is having the appropriate treatment she needs now (illness is a bit of a guessing game sometimes) but who'd be a vet - it sounded quite dangerous for all involved.

What absolutely lovely gardens - rain or no rain. Well done for being so Very British and ignoring the weather!

The gardens are lovely--you did deserve ice cream after braving the elements.

Hope the little heifer gets well.

Poor girl. I hope the cow and calf are fine

I am glad the sick heifer is getting better,Pat, - and good for you and your DIL for visiting the garden in dismal weather - the flowers look as if they would be quite glorious on a sunny day, - and you had tea and cake to brighten things!

It can be pleasant to wander round gardens in the rain, specially if there's tea and cake

Quite a bundle of good things here. fascinating to hear about the heifer
and the garden - both looking under the weather, if you'll forgive the pun. Good to know that the few hardy soles got something from their visit, though.

Humans often get ill during pregancy (preeclampsia springs to mind) - perhaps there are bovine equivalents.

Thanks for your comments. The heifer is a little better today I am glad to say.