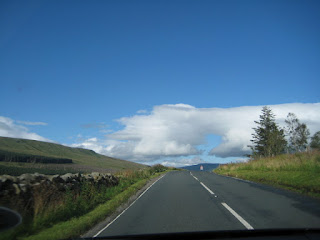 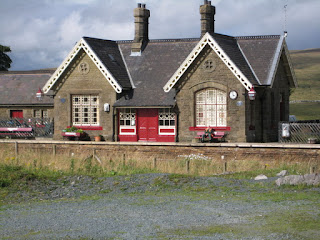 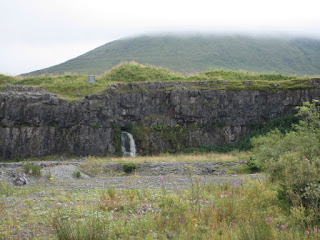 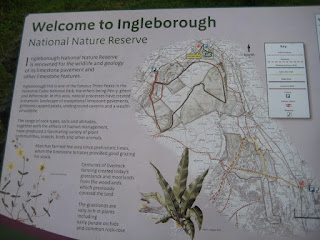 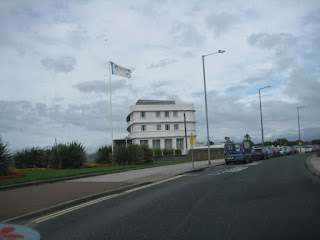 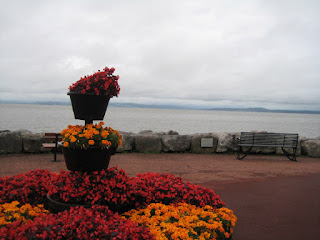 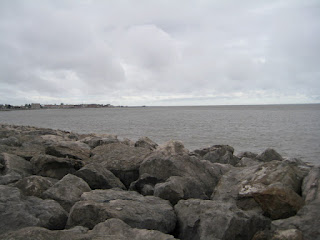 Yesterday was the nineteenth anniversary of our wedding day and - by tradition - the farmer always takes me out for the day (to say thank-you for looking after him ((not sure what I do to say thank you to him!!))

We usually go North into the wild country or East towards the east coast. But for a complete change we decided to go West - not into the Lakes, which is quite near but which we visit fairly often but on to Morecambe Bay.

We intended to have lunch in the super Art Deco Midland Hotel in Morecambe, which has been completely renovated. But as we climbed to the top of the Pennines we climbed into cloud and rain and had to make a decision what to do. Finally we decided to stop off and eat in my favourite Italian restaurant in Kirkby Lonsdale and then make a decision after lunch. The lunch was delicious, as always and as it was a special day we allowed ourselves Eton Mess as well as a chicken dish with risotto to start with.

By the time we came out of Avanti the sun was shining so off we went to Morecambe Bay. We haven't been to Morecambe before and we parked up at the posh end (why do all these seaside places have a posh end and a 'kiss-me-quick' end?) There was hardly anyone about in spite of it being mid-season. The tide was in and we walked along the Promenade with Tess for about a mile, then back to the car and a drive to look at the hotel. We would have gone in for a look, but the car park was full.

Coming back we called in the splendid Country Harvest shop for a cup of tea (mainly to wake me up as I had had a poor night the previous night and was beginning to droop by this time) and then by the time we reached the Ribblehead Viaduct we were able to call in and have a quick look at the Nature Reserve by Ingleton station on the Settle - Carlisle railway and the viaduct. It was only a quick look as it was five o'clock by this time and various animals were waiting but we saw enough to make us want to return. There are excavations of a Viking longhouse and a farmstead up on the top of the old quarry, so we shall go back to have a look at those soon.

The rain had completely disappeared on the tops and the skies were beautiful.

We always enjoy out anniversary day out - it has become quite a tradition. Today I am going out with a friend and David is walking - more about that tomorrow.

Congratulations to you both, - what a lovely day out and I'm glad the sun shone for you eventually. It's so sad that this summer's awful weather has kept people away from many resorts. Hoteliers and guesthouse keepers will be struggling.
I'd want to go back to see the Viking site and a ride on the steam train through your wonderful countryside would be a treat.

You've answered your own question about how to thank the farmer, Pat. Kiss him quick!

Happt Anniversay! What a busy day out, it sounds as if you had a fabulous time :)

Happy Anniversary to you both, - a reason for celebration that you are together and looking after one another with love! Sounds like a lovely day and hope your twentieth year together will be equally as happy and pleasant.

Lovely day out and Happy Anniversary.
Thanks for all the wonderful photos.

Congratulations on your 19th anniversary. My husband and I always have a day out to celebrate ours too (and for birthdays as well - any excuse!)

What a lovely day you had, but a shame you couldn't get in the car park to check out that Art Deco hotel. I've seen it on one of the Antiques programmes (one of the dealers is a local lad) and it looks fabulous.

I would be checking out that Viking longhouse dig too. Just my cup of tea!

Congratulations and happy anniversary. What a lovely way to spend it. Going back to see the viking house and the countryside around it sounds like a wonderful idea to me. Cheers

Happy Anniversary. Sounds like you had a very enjoyable day out.

Happy anniversary.
K treated me to afternoon tea at the Midland while we were on holiday up there. (Sort of belated birthday present because Easter always gets in the way of my birthday)

It's worth the trip - trust me!

Thanks for the anniversary wishes and thanks also for visiting - wish it had been in person.

I can hardly believe it. I thought the world and his wife been to Morecambe. We had our annual holidays there when we were children - went there on a motorbike sidecar combination - all 6 of us. What a sight we were!