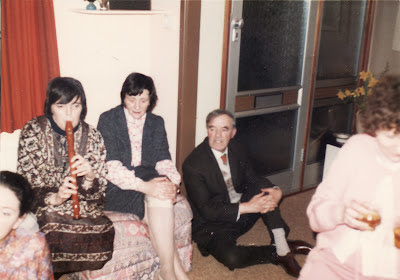 I have been lucky enough to have two happy marriages. The first one lasted thirty-nine years, until my husband died in 1991 and the second one has lasted nineteen years in a week's time and is just as happy in a completely different kind of way. This is probably a good thing as there are few, if any, points of comparison, which is good all round for everyone concerned.

Of course I have many memories and I often try to keep them alive, if only for the sake of my son and his memories of his father. But every now and then I get a nudge of a memory about which I haven't thought for years, and I had just such a memory yesterday when my son and his wife returned from a day out with the Solitary Walker and his wife. (Dominic and Mrs Solitary Walker are cousins).

He brought back an envelope of old photographs for me and looking through them was really strange. I have printed one for you above. In those days we used to have quite mad parties at the house of my sister-in-law. There was never a shortage of drink going round and there waa always, always, music as most of my brothers-in-law (my husband was one of twelve!) were very musical and played various instruments - flute, clarinet and/or guitar. At these parties the guitar came top and the players had a fund of old songs which they knew and which they could play for the whole night. We all knew the words and we all sang and played.

My instrument is piano and that was not possible but I also played in an early music group and had a stack of recorders from very high to very low and I used to love playing an obligato above the guitars on these occasions. Here I am, about thirty-five or forty years ago, playing at just such a party. You can see it is in the days of those fine cotton long Indian style dresses - I really thought I was the bees knees in it and wore it with long boots!

The parties were legendary within the family. Of course they are no more - many of them have passed away and the others are pretty dispersed. But it was lovely to be reminded of those days - I haven't thought of them for ages. All these memories, tucked into niches in our brains, just waiting to pop out on the right occasion eh?
Posted by The Weaver of Grass at 07:06

pat
you must have been a child bride first time around

Lovely memories - all those good times, good friends, good music. All the bits and pieces of life that make us who we are right now.

You are the bee's knees. I used to give my youngest daughter, who played the clarinet, any unusual wind instrument I came across. Recorders were one such. But, I must have given her an ocherina some time in her childhood. I came across my ten year old granddaughter playing it the other day and was informed I had given it to mom when she was a little girl. She still had the same box to keep it in.

Lovely photo and post today.
Memories are indeed just waiting to pop out.
I have very few photo of my family and childhood. All my photos where burned in a wildfire (arson) that swept away all my photos and my children's early year photos.
So I really enjoy when people post some of their old photos and stories.
Wonderful Sunday post.

I am an only child so think it must be wonderful to be part of a large family. I had lots of cousins which made up for my lack of siblings and we had lovely gatherings at my maternal grand- mother's house especially at Christmas. My mother and one of her sisters played the piano and I remember sing-songs round the piano.

Lucky in love, but unlucky to have had a recorder player in the family.

Such a thought provoking and special post. Thanks for opening a window and allowing is a glance into your memories!

I just found your blog (via John Gray).

Wierd. I've just spent the last week immersed in memories, putting together a photo memory book for my mother, who has dementia.

She already treasures it. And for me, on the whole, an equally rewarding experience. But did I really look like that when I was 12???

This sounds such terrific fun!
How wonderful to be musical.
Lovely to discover photos from different sources.

I grew up in a country town, with lots of cousins in the country, no TV of course and only very crackly radio reception a lot of the time. There was always someone who could play the piano and we had wonderful singalongs at all our parties - you have brought back lovely memories. Thanks for visiting my blog. Cheers

Lovely to be a part of a musical family especially at musical get-togethers. I can imagine the fun you had.

I had a dress almost exactly like that. I must have a photo somewhere - I'll see if I can pull it out from the archives.

You must have had such fun being part of a musical family. Lovely memories.

I love that photo - the dress is lovely! What type of recorder is it? It looks too big to be a descant. I always wanted to play one of the bigger recorders but never got the chance. I still have my descant recorder though, and a tin whistle!

Hey, Pat, I'm standing in another part of the room, but had the camera caught me you'd have seen a willowy youth with long hair and a cheesecloth shirt. Yes, as you say, times have changed!

I loved teaching recorders. We had so much fun. I went to a summer music camp for adults and we had a grand time.
Cheers from Cottage Country!

You WERE the bee's knees!! Just look at you! How wonderful to have memories of two happy lives in one!!
xoxo,
p