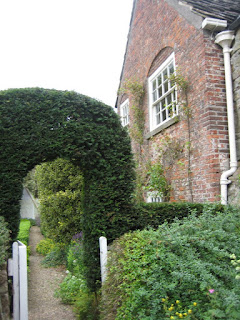 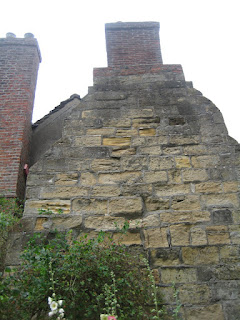 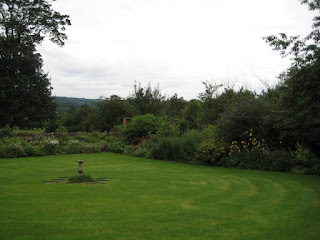 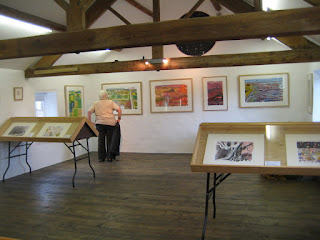 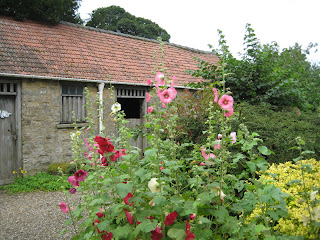 Another anniversary week-end day out - this time without the farmer as it was his walking day.
A friend and I went to Shandy Hall at Coxwold - once the home of Laurence Sterne the writer of Tristram Shandy - the novel which is widely thought to be the progenitor of the stream of consciousness novels of the twentieth century.

Sterne lived from 1713 to 1768 and did not have an altogether happy life. His marriage was not happy and apart from one daughter all his children were stillborn. This indirectly resulted in his wife having a major breakdown in mental health.

Shandy Hall in Coxwold stands next to the church and has tremendous atmosphere, particularly in the garden where one really feels one is walking in Sterne's footsteps. There is a peace and tranquility to it and the ancient house in the background adds to this.

We looked round the garden but our real reason for going was the exhibition in one of the barns of the lithographs of Carry Akroyd (go to her website to see her superb work), all of them linked to the poetry of John Clare and also owing a lot to the writing of Ronald Blythe. All three live or lived in the same area - that fenland corner of Suffolk/Essex/Northamptonshire. Her work is both inspired and inspiring.

I was prompted into buying John Clare's 'Shepherd's Calendar' in the latest edition. We emerged from Shandy Hall punch drunk with the effects of the exhibition and sat in a forested area with a cup of tea and a piece of cake for an hour (until it started to rain) just discussing the lithographs and the writing. Today I am still on a high as a result - long may it last. I find that rarely do exhibitions move me as much as this one did - and coupled with that wonderful feeling of walking in Sterne's footsteps it was a day to remember.

You don't stop do you?

What a beautiful place and how sad that the Sterne family had so much unhappiness in their lives. I am going to take a look at Carry Ackroyd's work - it sounds wonderful.

Hi, found you via Mouse's blog.
Is Peter Dick still potting in Coxwold?

Your boy has just posted about Shandy Hall, hasn't he? Couldn't you have gone together?!

Shandy Hall sounds a fascinating place to visit and full of atmosphere. How sad it is that so many works of literary greatness come from an unhappiness in life.

I too will have a look at Carry Ackroyd`s site. I love the poetry of John Clare.

I used to love Coxwold when we lived in that neck of the woods. I've never actually been inside Shandy Hall though!

Interesting post and a great day out by the sound of things. Off to check out Carry Ackroyd's site now. I never knew that the stream of consciousness writing style began so early - I thought it evolved around the time Virginia Woolf was writing Mrs Dalloway! Shows you how little I know!!!

Oooh WOW! What a lovely style (parts of it remind me of the 1930s and others book illustrations I recall from books of the 1950s and early 60s - just some of the colourings/styles). I LOVE Moon Fox.

You do seem to be having a super time lately!
Sorry I have commented for a few posts but lots of family stuff going on.
Would have loved to have been with you on the Sterne expedition, not to mention John Clare whose work I have loved for fifty years (gosh!)
Our cousins used to live near Southend in Essex --definitely a 'kiss-me-quick' sort of seaside place.
As a child I thought it was BLISS!
Happy wedding anniversary to you both.

Thank you for visiting.

Those are some beautiful hollyhocks there - happy anniversary!