Weather. and something to cheer you up. 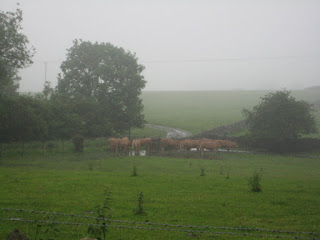 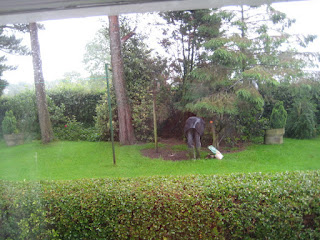 I know the British are notorious for talking about/complaining about, the weather, but really, this Summer (what a misnomer that is) takes the biscuit for awfulness. One day this week we had 19mm of rain, today we have 18mm so far and it is still raining as I write. In addition we have a gale blowing in from the North East. That, I suspect, with my rather limited skills at weather-forecasting, is holding the weather front over us rather than allowing it to slip North.

This morning the farmer, in full Winter weather waterproofs, went out with the dogs and then filled up the feeders on the bird tables. We have so many birds. I think every goldfinch, greenfinch, chaffinch, yellow hammer, tree sparrow etc. has brought along all its babies, its cousins, its aunts and uncles. They are going through the seeds and nuts at a rate of knots.

The field opposite is flooded and now, to cap it all, a heavy fog (possibly low cloud) has blown in, so that at half past two in the afternoon we have all the lights on.

Two photographs, both of poor quality but they give you some idea of the conditions. The first was taken through the kitchen window at breakfast time (for birds, not us) and the second taken just now from the side of the road looking into the field, where the daft Limousin heifers are all standing knee=deep in the flooded corner of the field.

Now for something to cheer you up. A friend has just returned from three weeks in Shetland and tells me that all the public loos on the islands have poetry fastened on the backs of the doors. This project is called 'Bards in the bog' and is the idea of Jen Hadfield, reader in residence with Shetland Library Service. If you want to have a look at them - and it might cheer you up if you are getting weather anything like ours - go to http://www.shetland-library.gov.uk/Bards.asp - or just do as I did and Google Shetland Bards in the Bog.

Finally a friend has e mailed me after reading yesterday's Naming of Plants to remind me of dear old Paul's Scarlet (his name is Paul, so he can imagine it is named after him). Thanks for that Paul.
Posted by The Weaver of Grass at 06:24

Sorry to hear about all of that bad weather, Pat, but this too shall pass. It won't be long until your incomparably beautiful English landscape if bathed in days of warm sunshine. At the very least, let us hope that's the case. In the meantime, read a little poetry, wherever you can find it, on the back of the loo's door or elsewhere.

I love the Bards in the Bog idea and will take a look at that website.
Weatherwise - it's beyond a joke isn't it? Yesterday we had a lovely day - the first this week - today it has rained almost nonstop and the forecast for the weekend is more of the same.

Poetry in the loo... now sure how to take that. Here in America it would be covered in graffiti quicker than you could snap your fingers.
Heathens live here.
The heifers standing in the knee deep water made me laugh. My friends family own a turkey farm and when it rained they had to run out and get the turkeys under cover because they would just stand there looking up at the rain glub glub.

We have had one decent day in the last two weeks and today the rain is back, falling like stairrods outside the window. When I come in soaked again after feeding the animals, I might venture to the Shetland poets to cheer me up!

Today in Norfolk it has rained a lot all day so we are having a very wet summer. My farmer's hay is floating down the field because he cut it last Friday. The he spent all day Sunday turning it. Ha ha. I told him so. We had a good laugh about it this morning at 6.30 am. That's life. No good worrying.

The Dutch must be related to the British: we are also always complaining about the weather. It is either too hot or too cold, too windy or too calm, too wet or too dry!!
I am now in Cooktown in the Library, where my daughter works on Saturdays. It has been windy for some days now and sometimes there is a real gale blowing, but I am enjoying the company of my daughter and her family. I can use the computer of the library while she is attending customers.Have a great weekend.

So much rain for you, but so green. Off to visit the site you suggest.

Our weather may have finally changed - but I don't want to be too hasty with that! Yesterday morning I found the world's biggest slug climbing up the wall outside. It was positively huge - and very healthy looking!

The Mrs. Miniver Rose comes to mind, did that US WWII era film play in England? Such a tribute to jolly olde.

Weather is strange everywhere, how kind of you to care for the confused and damp birds.


Have a fine Weekend

Yes the weather is awful isn't it? Very heavy rain here just now. So glad we had our wonderful holiday up in the warm and sunny Highlands...

Well up to your usual standard, a fascinating read - and that includes the photographs: thw quality is good in that it gives a powerful impression of the conditions. Excellent.

Lady Banks roses might be another... They are wonderful thornless yellow roses that climb. Easily grown, I had such great success with one on the arbor that when a storm came along and toppled it all, it took two of us hours to clear the drive.

I just read that June was the wettest on record there. We could sure use some of that rain here - we won't see a drop until September possibly or October for sure...

I am so sorry about your lousy weather Pat, - but so heartened to hear about the poetry in the Shetlands and am off to investigate.

Your day was much like ours yesterday. I was outside a lot, seeing to a poorly pony, and could have done with a break from constant, driving rain.

I will enjoy looking at the Shetland Bog Poetry when I have five minutes to sit down again!

Thank you for the comments. Lovely day today.

Poetry on the loo? Pat - I had this from the age of 5. I was brought up by my Auntie Dot who happened to have an outside loo....inside hung this poem...

"John and Mary thought they knew much better than their mummies. They ate their tea, with hands not washed - now both have painful tummies!"