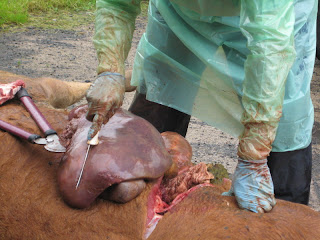 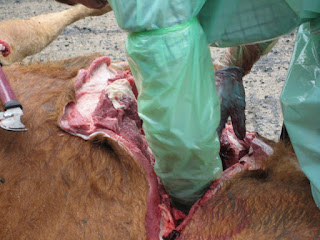 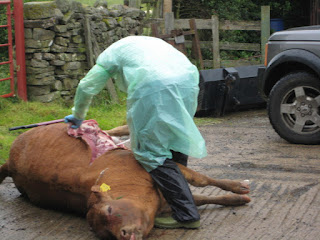 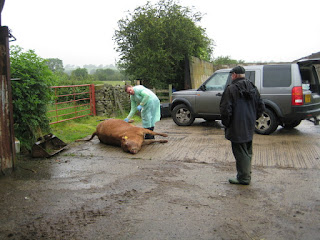 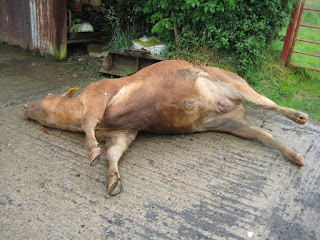 This morning the farmer found a heifer dead in the field. When he walked round yesterday afternoon they had all seemed as normal. The trouble is, as he keeps telling me , this is such unhealthy weather, both for animals and for plants. She was lying flat out in a pool of water (there are pools of water everywhere, in every dip in the fields)and directly under the electric wires, so he did wonder whether or not she had been struck by lightning.

Because of this and the fact that lightning strikes mean insurance claims may be met, the vet came this afternoon and did an autopsy. I just had to be there to witness what it entailed and I took some photographs.

Oddly enough there was absolutely no blood whatsoever. She was very bloated and we were advised to stand back as the vet stuck a knife in to let the air out. He also let out the most appalling smell, although she can't have died before 5 o'clock yesterday afternoon.

Because he knew I was interested, he talked us through the 'operation'. First of all he made a cut directly along her tummy and then up behind her head. Feeling about inside her he then brought out her organs one by one in order to establish that they were healthy. Lungs were very healthy, as was her heart. He then made another incision to bring out her spleen - also healthy. Then, feeling about inside he brought out an enormous, very enlarged and very unhealthy liver. There was the cause of the problem. He thought probably a virulent infection that overtook her so fast that she exhibited no symptoms before death.

So there you have it. One dead heifer in the yard waiting for the 'knacker wagon' to come - she is cut up into pieces and the vet's gloves and apron are stuffed inside her. He scrubbed up using a bucket of hot water and disinfectant. I must say he seemed to enjoy the job and also enjoy talking us through it. But I really cannot begin to describe the smell of it all.

It is always sad to see an animal die.
Posted by The Weaver of Grass at 06:52

upsetting pat but fascinating!
I have lost many of the older birds on the field this "summer"
the wet and cold has taken their toll

Very sad indeed Pat, especially in a young and otherwise fit animal. I fear that many creatures will have suffered this year.

definitely a change of pace....but the scientist in me just had to look--we used to help our neighbor birth "stuck" calves--that can be pretty gory too

It is sad to lose a creature in such a way. I suppose that insurance won't be paid now?

Very sad. Our vet was also concerned that the humid , wet summer is causing all kinds of gut infections. Our Ginger pony had a lucky escape ( touching wood) but your lovely young heifer was very unfortunate.

It is frightening how quickly these grazing animals can become so seriously ill.

So sad ....I could never work on a farm ...even though I eat meat. I do hope no other animal is struck down.

Sorry to hear you lost a good heifer. Do you know if it was the weather that caused it? It must be a worry with all this rain.

I'm sorry you have lost a youngster - I wasn't going to look but of course curiosity got the best of me!

The weather seems to be taking its toll in so many ways which impact both humans and animals - over there too much rain, flooding and cool temps., here roasting heat and dry conditions killing off flowers and veggies etc.

Today though we are getting a good soaking as I write - at long last a break in the heatwave.

The minute I saw this I thought about the photo with all the cows standing in the water and not on the dry land. I wonder if it was all the wet fields ?
Sorry you lost what looks like a very nice cow.

I can't help thinking that if you vented my bloated stomach that it would smell like that, and I can't help wondering if my liver would be as big too. Let's hope you never find out, Weave.

Interesting about the liver- I want to know what the toxin was that overtook her- Hopefully she wasn't suffering much- I Hate to have an animal in agony... Thanks for sharing.

this weather is really getting us all down and to find one of your animals has secumbed to it is just the limit! so sorry Pat.

Was it RyeGrass staggers perhaps? I'm not sure what pasture you have in the UK I do know that there are certain toxins found in Rye grass that can cause death in cattle. It's been well researched here in New Zealand. Just very sorry you had to lose such a good animal. I've assisted a vet with a necropsy on a steer years back. It died of brucellosis and we had to vaccinate the owner's entire herd. We're in winter now and it's been very wet. Fine the last few days which makes a nice change. Hope you're well!

Interesting. Just read another blog of a friend who lives on a farm. Lost her cat and she talked of some of the chickens dying. Things many of us never think about as we think about a farming life.

Pat, if there was a prize for Most Interesting and Unusual Thing I Saw Today...you would win it!

Rather sad. Is under a powerline a likely place to get struck by lightning? Or a good place to stand in a thunderstorm? I'm not sure. I would have thought lightning was more likely to hit the line than me if i stood there, but I don't know - these things are not always obvious.

Thanks for the comments. It did die of natural causes - we don't know what but definitely not a lightning strike. The knacker wagon has just been and taken it away - it all seems such an undignified end for a nice beast. But such is farming, I suppose.

firstly, my mum (who only has a few chickens) always says..... "if you have livestock, invariably you will have deadstock!" - It goes with the territory, and as heartbreaking as it is, it's just a fact isn't it.

Second.... those telescopic "loppers" had me giggling to myself - extremely gory and brutal - almost like watching "Walking Dead"!!

Thanks for your interesting story.