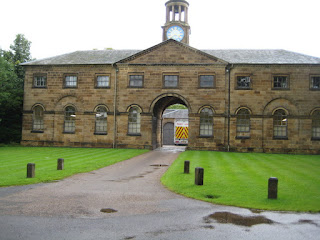 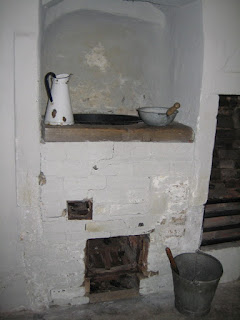 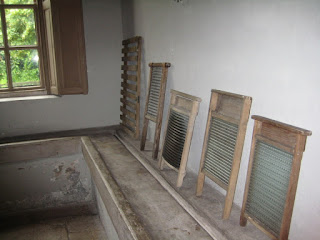 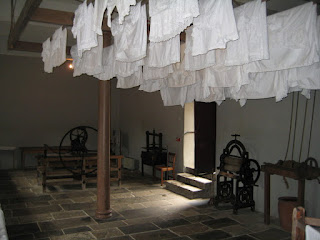 After visiting Rievaulx Terrace on Sunday, we went on to Ormesby Hall - at least we did when we finally found it. It was so difficult to find that we gave up and, seeing a sign for Yarm, which we knew was on our way home, we turned down there only to find a sign for Ormesby Hall after all.

The Hall itself was the home of the Perryman family the last of whom died in the mid twentieth century and left no children, so that the house is left exactly as it would have been in that day. There were some delightful touches - one that particularly caught my eye was that every bedroom has a writing desk in a prominent place with a view over the garden. This was because the hostess insisted that every guest should have a pleasant place at which to write her letters. Golly how times have changed since then. And every bedroom had a small, portable bookcase holding a selection of books which the hostess chose specially for her guests.

By the time we got out into the grounds the rain threatened. We made a quick sortie down to the stable block which is strictly out of bounds as it is the place where the Cleveland Police Force keep their horses. But we were able to peep over the stable doors into the beautifully kept stables and the huge horses with names like Pete and Dave. (What happened to names like Major, Beauty, Blossom and so on?)

And finally, in the pouring rain, we sheltered in the Laundry which told its own sad story for me at any rate, because my mother was in service in the early 1900's and used to tell us tales of the cold stone floors that she had to scrub and how the cook ruled the roost and dished out orders. There was a huge copper for boiling the white clothes (of which there were plenty hanging up overhead), a copper which needed constant stoking with wood I presume; there was a long, slate gulley with a row of rubbing boards where a line of maids would be busy using 'elbow grease' to get the clothes clean. Maybe we don't know we a born these days.
Posted by The Weaver of Grass at 06:19

I allways enjoy places like the laundry and other domestic parts because I figure that if I had an ancestor living in one of those houses it would have been as a servant
Your mother must have had a hard working life.

Glad you eventually found it, it looks a lovely place! At one time those old rubbing boards were popular with musicians.

I like the idea of a desk with a view in every bedroom!

Times past are always fascinating. What a treasure that house is, being untouched for so many years. Gracious living above stairs, hard work below. However, as long as the Master and Mistress of the house were kind people I suppose their servants had a better life than some.

We are not far from here - we were heading over to Leyburn but the skies were so black we changed course and went to York for a cuppa! Missed the hailstones by a few seconds. Set off for home - rain finally caught us on Pickering Moor - still we were on our way home then! lol!

One of my favourite local places. The most interesting thing about the Pennyman is that they got on well despite the fact that she was very left wing while he was chair of the local Tory party (I think). She helped travelled abroad to help orphans in the Spanish Civil War and wrote the libretto for her friend Michael Tippett's first opera (later withdrawn by him) called Robin Hood. This was performed by people attending a scheme for unemployed people in the area set up by Ruth Pennyman. Sadly, there is little trace of Tippett at Ormesby Hall which is a shame as I think it's one of the most significant historical aspects to the place.

I adore history and historic homes. And i love the idea of a beautiful nook in which to write in every bedroom! But those large homes were difficult and a lot of work to maintain. I'd love to be a guest in one someday, and sit at one of those desks and write a long letter. (Not on a laptop, but on beautiful stationery! :)

What a fascinating glimpse into times past. I love visiting historical homes, and thanking my lucky stars I live in the present, where life is much easier. cheers.

Oh my, what a piece of history. I'm glad you got to go. Totally different lifestyle for sure.

Looks like a fascinating place. I've never been. Even though I have always been a keen stately home visitor.

Thank you for visiting

My sort of place. I always feel at home in the servants' quarters too!

My husband's mother's side of the family ran a laundry from home, and then moved from Scarborough to Manchester to set up a laundry - jolly hard work I'm certain. My mum had a "copper" in the corner of the scullery where she did the laundry on a Monday. Ours was gas-fuelled though.

The house was last occupied in the mid-20th century?!? All I can say is that the laundry, at least, looks more like 100 years earlier than that! Well, 75 anyway.