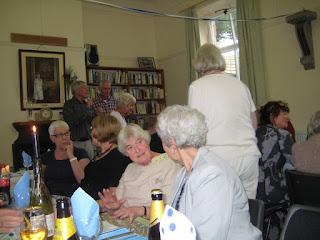 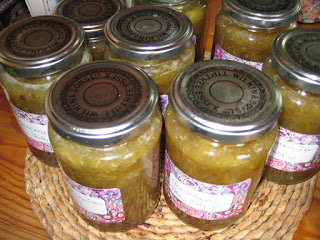 ...in that order.
Yesterday morning, before going in for my usual trip to the market and meeting friends for coffee in The Golden Lion, I made ten pounds of gooseberry jam. The farmer picked the gooseberries the previous afternoon, so it was time they were used. I must say it tastes delicious (there was a little left for a bowl and I had a taste.)

After lunch I made a small amount (one and a half jars) of gooseberry chutney to a recipe I found on the internet. Artic Fox kindly sent me a recipe after I asked on my blog if anyone knew one. It was heavily based on hot flavours, which neither the farmer nor I care for. So thanks, Arctic Fox, but no thanks - too hot for us.

However, I did find one which used only gooseberries, red onions, ginger and thyme leaves. At present it tastes a bit insipid, but maybe the flavours will develop after a week or two. Anyone wanting the recipe, please ask.

Now to the Greek bit. Yesterday evening I went with a group of friends to a nearby village hall where the ladies were putting on a Greek evening. Like the Italian evening they put on a couple of months ago, this one was lovely. There were about forty of us and the food - moussaka, various meat balls in various sauces, feta, olives, salads etc. - was laid out on a buffet table so that we could help ourselves. It was all delicious. I managed to resist the pud - baklava - but there was also a merigue pie, which turned out to be a gooseberry meringue pie rather than the usual lemon - so the gooseberry theme carried on throughout the day.

We ended up with a bit of circle dancing to Greek music, although I was a spectator rather than a peformer. It was a thoroughly nice day with friends - surely the best kind of day to have.

Today, because the weather forecast is better, the farmer has begun to cut for hay. One lady has insisted hers is ready and he is cutting it on her demand, but really he feels it needs a bit more sun and breeze to dry up the ground before cutting begins. After such a wet summer, suddenly weather forecasts suggest there might be a bit of sunshine and I must say it was very welcome this morning when I went down to the Library. Added to that I managed to find Alexander McCall Smith's second book in the Corduroy Mansions series, and as I read the first book in the series last week, I am looking forward to sitting outside on a seat in the sun this afternoon and having a good read. Enjoy your weekend.
Posted by The Weaver of Grass at 03:48

I thought this was going to be a techie post - Blackberries and Geeks, etc. I'm so glad it's about jam.

Your gooseberries and Greek adventures sound great, but the fact that you are reading wonderful, wonderful McCall Smith is even better, Pat. He is so civilized, and I read somewhere that he writes books faster than some people can read, so there is always a new one somewhere. I am currently reading the latest 44 Scotland Street series and am hoping to find out this afternoon what transpires about Bertie's baby brother Ulysses. I am reading on Kobo so can't look ahead!!!!!

I had tasted delicious home made jam the other day - it was apricot and redcurrant. A surprising combination. But it worked. My mouth is watering at the sight of your gooseberries.

When I first read this I thought it might have to do with nature and computers.
Some how the Jam and Greek food with dancing sounds like so much more fun !
Is the jam for winter ?

It is always so satisfying to see a nice row of pots of homemade jam or chutney in the larder.
The Greek evening sounds great fun. I did lots of chores and gardening today so have booked my seat in the sun tomorrow.

I make up my chutneys as I go along - so I never remember what I put in them. I've never used gooseberries. Nice idea.

Make gooseberry fool and eat it for me!
So hard/impossible to find gooseberries here.

invite me over and I will organise you a "welsh" evening!

you've inspired me to make some chutney with the worcester berries that I picked today.

Your Greek evening sounds like a treat.
As for Gooseberries - you know, I've never tasted one. They aren't very popular here, though I bought a plant last year just to see what they're like.
I like any sort of chutney, but want it to have a bit of a bite!

You'll have to have an "Aussie " evening next. BBQ's, meat pies, pavlova, lamingtons - though the gourmet set are now incorporating crocodile, emu, kangaroo and bush tucker spices into the menu selection - a bit difficult to source in England I'd say.
I've never seen a gooseberry, but I'd say, as an ingredient, it's easier to access than a crocodile!

I must say that I like the sound of apricot and red currant jam and may well try some during this coming week. Thanks for the idea and for commenting.

Gooseberry Curd is delicious too. I'm sorry I missed your plea for a Gooseberry Chutney recipe, as I'm bound to have one amongst my many Preserving books.

I hope you enjoyed your book - not an author I've heard of.