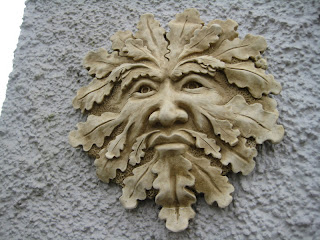 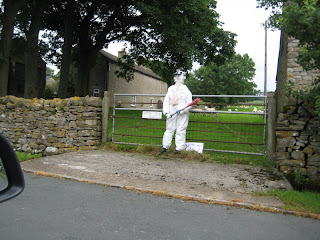 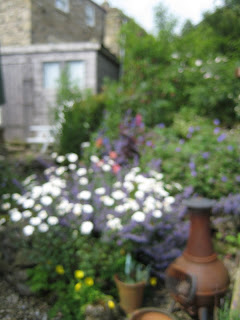 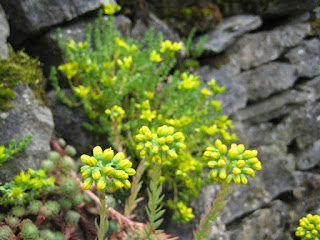 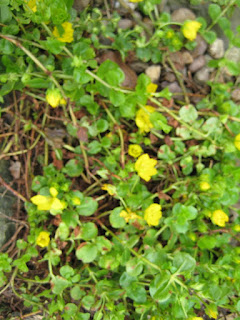 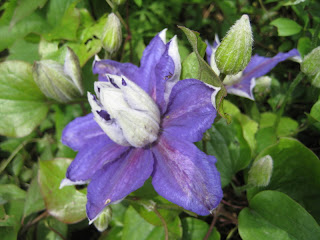 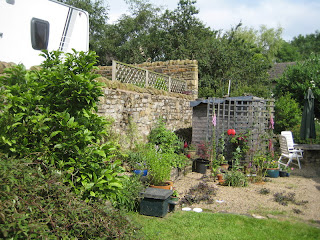 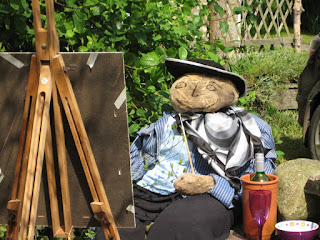 It has been Open Gardens and Scarecrows in the village today. As we live outside the village and too remote to attract visitors to our garden, we don't take part. But Dominic (made out of words) does and I slipped round to view their scarecrow and their garden before it all began this morning. There was a real buzz in the village.

Churchgoers were just leaving church. There was a scarecrow vicar standing in the gateway. I walked round Dominic and Karen's garden and took several photos for you to see. The weather has played havoc with all the plants but I have to say it looked far nicer than these photographs show. Their scarecrow was an artist 'waiting for inspiration' - rather good I thought.

The village hall was open for refreshments and various ladies were hurrying up the road with plates of cakes; the church was open for an art exhibition and there was a general feeling of excitement around. And best of all it has kept fine all day.

I love this communal activities. The first one was held in 1991, shortly after the death of my first husband. I had a cousin staying and I opened my garden (which is now Dominic's) and I also opened up my cottage so that people could look at his water colours. I didn't expect many visitors (none of us did as it was the first one) but I had well over 200 people round during the afternoon and I must say that it cheered me up no end.

On the subject of gardens and greenery = i thought you might like to see my Green Man - given to me by friends. He is on the wall just outside the back kitchen door. The Green Man (or Jack in the Green) is a figure in English folklore and appears in carvings in many churches throughout the country. He is associated with all things green, so it is quite appropriate to show his photograph on Open Gardens Day.
Posted by The Weaver of Grass at 09:36

Thanks, Pat. I enjoyed these photos and your commentary. It appears you are finally getting a short break from the rain.

What a lovely idea.
Gardens, tea, cakes and nice weather, perfect.
Love the idea of the scarecrows.
What a special place you live in.

What a lovely idea - I am particularly taken with the scarecrows, - so much room for imagination. Dominic's is very appealing.

we have the same sort of thing here....my garden is far too small to enter, but 12 orso hardy gardeners from trelawnyd try their best x

What a lovely looking garden.

Love your Green Man. And I've been meaning to say, I love the photos of your dog, especially the one where he's sitting on the stairway, saying, "Well, are we going for a walk or what?" Border terriers are really fun -- one of my husband's nephews has one and so do some friends of my daughter.

So glad the weather was fine for your village gardens open day. I love your Green Man and Dominic's scarecrow. It sounds as if everyone had lots of fun and a really good day.

What a lovely day and some great scarecrows (I liked the bottle of wine at the artist's elbow!) I bet there has been a real Jill Archer bake-up in your village these past couple of days : )

We love Green Men too and have several in our house and we always look for them in old churches and cathedrals. They are a fascinating link with our Medieval past.

Gardens, scarecrows, and greenmen--wish I could have peeked in at them all.

I collect greenmen, too, and have a few on tree trunks in my garden.

Thank you - I tried to give you a short tour of their garden. Apparently they had quite a flow of folk through it during the day.
Dominic (made out of words) also put a blog on about the day, so if you want to know more you could go to his blog.

we have some local scarecrow festivals in this area but they are usually around September time, and don't involve open gardens or anything so grand.... sounds like a nice village tradition - loving your green man!!

How fun to see Dominic's - thank you for the tour!