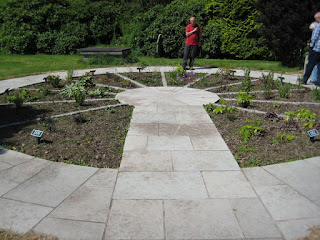 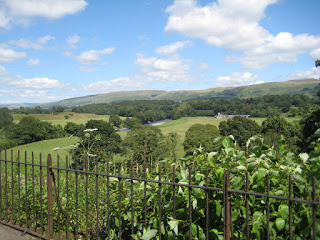 The course of our rivers up here - as everywhere I suppose - is governed by the hills. The water cascades off the hills, finds the lowest point and then flows through the valleys (or Dales, depending where you live). Thus we get Swale Dale, Nidder Dale, Calder Dale and so on. Over on the other side of the country they are called valleys - so we see the Ribble Valley, the Eden Valley and the Lune Valley. And it was to the valley of the River Lune that a friend and I went on Friday to meet our friends P and D from Windermere. Kirby Lonsdale is about half way and is a beautiful journey there for all of us.

We always have lunch in a lovely Bistro called Avanti, which serves super pizzas, pastas and chicken dishes. I had chicken campagna (chicken breast, green beans, garlic fried potatoes all served in a herby sauce) but all the meals looked scrummy.

It was a lovely day over there with a brilliant blue sky and the air full of swifts (we have not seen a single swift here in North Yorkshire around our farm), so after our meal we all walked over, through the churchyard and down to look at the Lune View, which is a view over the valley of the River Lune, a valley painted by JWM Turner and commented on by Ruskin. I never tire of standing there, more or less where Turner stood, and looking out over the magnificent scenery. I know I have put this view on my blog many times before but I'm sure you can stand seeing it again.

Coming back through the churchyard we came across this lovely Memorial Garden, which I think is such a lovely idea. It is constructed in a circle, which is somehow a restful shape and also is significant in that it denotes the circle of the year and the way in which the months come round again. Each month has a separate space and those who lose a loved one in that month can plant a plant within that space in memory. I have never seen one before, have you?

We came back a different way, meeting a whole lot of very old vintage cars obviously on a Rally as a friend had seen them in Swaledale four hours earlier. Most of the cars were open to the elements (lovely as it happened, although not hot) and were driven by men, all dressed up in the right gear for that era. Most had women in the passenger seat, swaddled in scarves and blankets and looking rather bored and frozen stiff. Ah well - was it ever thus?
Posted by The Weaver of Grass at 01:06

I love the idea of this Memorial Garden...it's such a unique and beautiful way to remember a loved one. I've never seen one before but great ideas like these have a way of spreading.

I walked part of the Lune valley when I did the Dales Way some years ago — and loved it. As for swifts, there are many here wheeling acrobatically over the village each summer. It's swallows I never seem to see many of.

Your day out must have been very enjoyable and the scenery is beautiful. I love the idea of a Memorial Garden - so many people would find it a great source of comfort.

There are so many interesting day-trips possible in your part of the world. I am going to a map now to see where you've been....

I can vouch for the lunches at Avanti (that is where we ate, isn't it?)

Lovely part of the world.

I love the idea of the Memorial Garden, and I don't mind how many times you put those beautiful views on your blog. Cheers

The air full of swifts.... what a nice image.

A lovely day out for all of you. I have driven through the Lune Valley and wished there had been time to stop ad walk.

That is surely some beautiful countryside you have there, Weaver! And the idea of a memorial garden is wonderful, all the more so because of its simplicity.

What a lovely day you must have had, Pat. Sunshine, old friends and beautiful scenery.