Work in the garden. 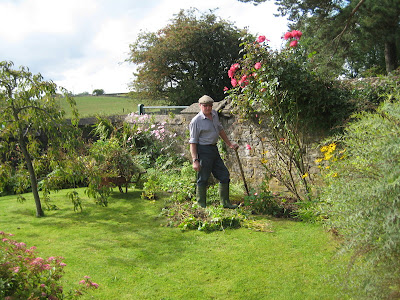 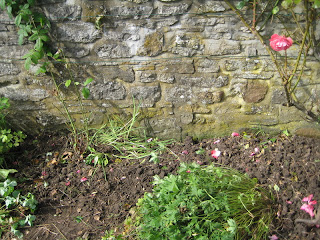 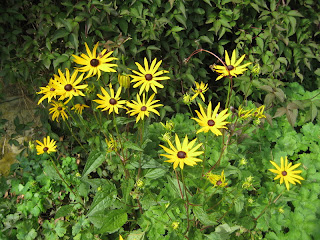 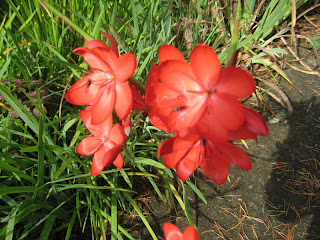 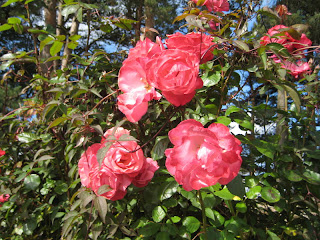 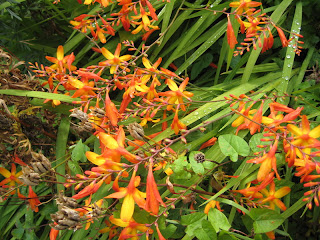 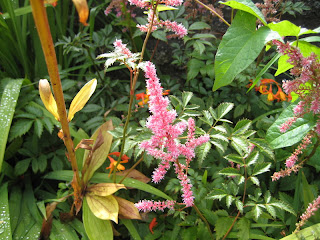 It is a warm but cloudy day here - just the right kind of day to work in the garden, so the farmer has started the Autumn clean-up. Because it has been such a wet Summer things have gone rampant.

The Clematis Montana Alba has colonised the big tree peony and the wall climbing rose, so I have spent half an hour cutting it back where I can reach it. I have no doubt I shall have cut off some of the wrong bits, but there is so much of it that it won't matter and I can pull it out when the leaves die off.

One of the long borders has become totally overrun with couch grass (wickens up here) which means everything has to be dug out in an effort to get rid of the wretched stuff. The farmer has made a good start on that, as well as cutting back many of the flowers which have finished for the year.

But there is still plenty of colour. The orange crocosmia is flowering well. I like it because it always reminds me of my childhood and the big patch of what was then called montbretia just outside the kitchen door. The rudbekia is also in full bloom. It is a useful plant to have in any garden as it flowers with unfailing regularity and looks like a lot of miniature suns.

The rose on the wall is on its third flowering, in spite of being almost choked out by the clematis. This rose, which was un-named, came from Woolworths about fifteen years ago and cost £1.50. It is on its third flowering of the year and is covered in bloom. Each year I cut it back to six inches above the ground and it still makes more than wall height.

The astilbe is still in bloom and has done well this year with all the damp. Any minute now the farmer will be in for his afternoon cup of tea. Sunday lunch was not quite to his liking today. Yesterday we had his kind of meal - sausage and mash with onion gravy and green beans from the garden. Today we had my kind of meal = Moroccan chicken (poached in white wine and served with sweet chilli sauce) on a bed of lemon and thyme cous-cous and served with ratatouille. We followed it with roast nectarines and creme fraiche. He said it was 'alright' which is I suppose some kind of praise - at least he didn't say it was horrible!
Posted by The Weaver of Grass at 06:28

I am 'new' to your blog....found you at John's Going Gently.
Sounds like you have a solid relationship with the 'farmer'....comments can come and go and not make any difference.
Your garden is lovely....noted the Montana Alba....we tried to grow it here and it lasted for a couple of years only. Winters are too harsh for it along the Atlantic coast of Nova Scotia.
Nice to meet you and look forward to your posts.
Jim

It's been years since I heard crocosmia referred to as montbretia, the name that I prefer.
I spent 6 hours in the garden yesterday, doing much as you did.....digging, pruning and tidying. Here it's bell flower that is so invasive, and I spent a long time with a spade, digging it up.

I still think of crocosmia as montbretia, in fact I've never heard it called anything else!!!

Your garden still looks beautiful despite it's rampancy. I've been busy out in ours today. We had couch grass in a rockery in a previous garden - what a nightmare. That lovely rose has been fantastic value for money! My father used to refer to any food with un-British ingredients as 'that foreign muck' much to my mother's annoyance. Your lunch sounds delicious.
I love your colour studies on your other blog, and the effects you have achieved with them. I have often found that exercises which sound quite simple, can turn out to be anything but.

Your garden looks delicious as always - ours is a rather sorry affair at the moment. I love that the Farmer enjoys his bangers and mash whereas you experiment with couscous and have gourmet tastes. I love these fine details of married life!

Oh Weaver... you should know that 'alright' or 'it'll do' are high praise in Yorkshire! :)

As always I love when you post photos of your garden, so lovely, I have garden envy.
As for the meals each one sounds so wonderful.

Beautiful, Weaver.I used to love bedding down the garden for Winter.

I'm envious of your garden, but really enjoy the photos of all the different flowers. You and the farmer must have very green thumbs.

lovely post ...I had forgotten that montbretia is now crocosmia...you are lucky to have that beautiful wall in the garden!

Lovely pictures, my favourite kind. Colour, nature and beauty. I've just spent a week in the Peaks next to Lyme Park and although it was mainly green of course, there were millions of shades of green with fair weather cloud and dappled sunlight making the most beautiful of scenes.
XX

Thank you for the comments - as usual - you all keep me going.

I would like to get on and tidy my garden too, but another round of anti-biotics (pretty strong ones) mean I need to rest up a bit, so I am indulging myself with Philippa Gregory's "The Constant Princess", bought for £1 at the car boot sale on Sunday instead.

Mind you, it HAS been raining hard on and off too, which doesn't encourage me to start filling the wheelbarrow with spent flowers and leaves.

I loved the sound of YOUR meal. OH takes after the Farmer though, being a North Country lad himself.

Love the unnamed rose in your garden! had to laugh about the "alright" about your cooking (does he like Meditarranean food?)and what he didn't say! You two must each have different tastebuds!

We call it montebretia, as well. Mine are not blooming nearly as profusely as are yours, though! I have much more foliage than flowers.

HI,
Nice garden. Really like it.. Thanks for sharing..