Our very own shillelagh. 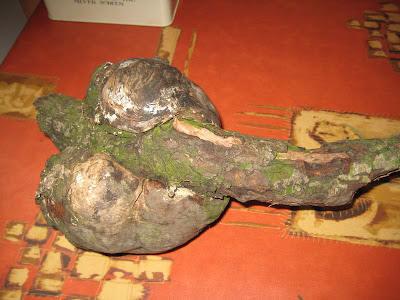 Hands up all those who could spell that without resorting to a dictionary (TFE excepted of course). It took me ages to find the word even then.

For years one of our old, gnarled hawthorn trees in the pasture has had this great lump of wood attached to one of the branches. A few years ago the branch broke off, leaving just a stump, but the lump remained. We used to look at it and say how much it reminded us of a shillelagh.


Now this Summer, the heifers in the pasture have obviously found it a good scratching post and gradually, over the Summer, they have dislodged it, until the other morning the farmer found it lying on the floor.

It is so like a shillelagh that I can't help feeling this is how they were formed. According to my dictionary, the term is probably from Shillelagh oak wood in County Wicklow so this makes sense doesn't it.

Whatever the origins, it is lovely to have such a good example and I intend to put it on the window sill and admire it, at least for a while.
Posted by The Weaver of Grass at 03:38

Thanks for the spelling and the image, Pat. Now I've seen one in the raw from nature as it were, you've made my day.

It is very neat. I absolutely could not spell it and would also have taken me a bit to know where to start looking :)

It's fantastic! I love the things that wood does to deal with the stresses of life. Like when a tree absorbs a wire fence that gets too close.

Hi Pat! What does TFE mean?
Thanks for your beautiful comment on 911. You are absolutely right.

I'd save it and enjoy it too. I love those oddities of nature.

I'd have to look up the spelling too - it's not a word we use very often! A fascinating piece of wood - keep it to hand for dark nights when strangers come knocking on the door at a late hour!
There is a willow tree near us which has developed a lumpy shape in its trunk which resembles the naked female form. It looks like a young woman trying to climb into the tree - over the years 'she' is melting into the trunk.

TFE , Reader Wil , means all things to all people!
And Shillelagh is a small village down the road from us, Weaver. Its people there had a great reputation for fighting with blackthorn sticks, and the village name was adopted. Fighting sticks were banned at some stage and so they were lengthened/ disguised as walking sticks.The black shiny finish is made from fairy dust butter and Guinness, all applied in liberal doses and the stick left up a chimney for 3 months.

Blimey Weaver, I wouldn't want to be an unwelcome visitor to your house.

No, I couldn't spell it either.

There's going to be a critter crawling out of that there thing... mark my words...

Tom has now scared the living daylights out of me talking about critters lurking in that shillelagh. It is going out into the shed NOW<

Peadar's comments shed a bit of light on the meaning of the word. So thanks for that Peadar.

Thanks to you all for the comments.

and I can spell shillelagh!

I'm becoming very poor at using a dictionary. I used to be able to go to the right page after a couple of tries, but now I'm going forward, back again, forward once more for ages.