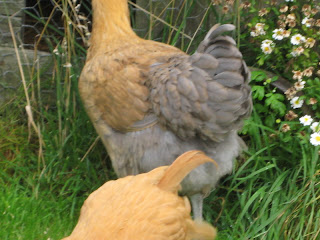 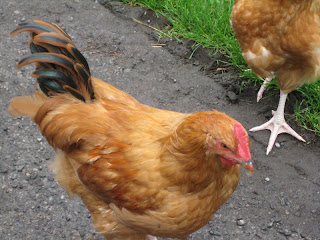 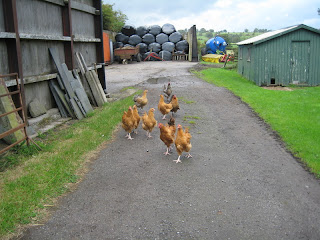 At fourteen weeks old today my young chickens have finally been let out of the pen and given their free range freedom. We did it yesterday lunch time when the farmer moved the run so that they could 'break out'. They were so delighted to be next to grass (they had been for the first six weeks after they were born - since then on concrete) that for the first half hour or so they stayed in the pen pecking at the grass and not seeming to notice that the pen was open at one end.

When it began to get dark they returned to their own hut, together with their ';mother' Goldie. Today they are roaming the yard and the fields along with the other hens. One of the cockerels has got a magnificent green tail growing and one of the hens is half blue and half orange - but on the whole they all favour their Buff Orpington father - a lovely golden colour.

The four cockerels will only have limited freedom for a few weeks, then - come the cold weather - they will be fastened in to fatten up. It sounds sad but we can't keep five cockerels and when I say 'fastened in' they still have a huge shed and a nice little outside run, so they are not exactly confined.

I have enjoyed having new chickens which I have bred myself - I shall certainly do it again next year and by that time entry to the bottom of the yard should be much easier as the farmer is intending to put in new (lighter) gates - at present they are so heavy that I cannot manage to open them unaided.
Posted by The Weaver of Grass at 06:03

We are thinking of letting our hens out on the weekend, as we`ve seen no more signs of raccoons. I hate having them cooped up even though it is a very large coop and they can roam around quite a lot. No roosters allowed here - our neighbour would take drastic action (our country neighbour, who built and moved in last year!)

It looks like you will have a splendid cockerel there.
I love poultry running wild around a farm, only trouble is they all want to come inside with the cats and having chicken and goose splotches on the door mat is not exactly what one wants . .LOL

It must be so rewarding to see your healthy brood strutting their stuff in the yard.

Your chickens look so happy running around the yard and I love the soft colouring of the 'half and half' one. I remember the puzzled looks of my father's hens when they saw snow for the first time. They were quite comical. I look forward to seeing your cockerels grow up - they are such splendid birds, and very tasty too! Easier to digest if you haven't known them by name!!

I was wondering how the brood were doing.
They all look wonderful. I especially like the half blue and orange hen, her coloring is fabulous.
So funny that they were all so intent on pecking the grass the open door went unnoticed.
Love the photo of family walking down the driveway.
Lovely post today.

The ones we hatched in school went to live with one of our teaching assistants. Just before the summer holiday, she brought them in to visit. The children were amazed to see how big they had grown in such a short time!

Such beautiful hens and handsome roosters - and look at those clean feet!!

Understand you can't keep all the boys but does this mean you will bring them to the table later? Being a non meat-eater I also don't eat poultry - I just hope you don't name them!

Meanwhile I can see all the birds have a perfect home and that you care about them. Keeping chickens has become very popular here lately - but I think the city ones sometimes are too restricted in back gardens and need to be free range on a farm.

Lovely story - reminds me of the those long ago days listening to The Archers!

P.S. Good news about the new gates - our shoulders need all the help they can get these days!!

Congratualtions Weaver! I love the look of them - especially the one that's growing the tail.

Glad you like the chickens. A friend has asked for some eggs to put into their incubator - so I shall be enjoying moe chicks once removed. I just hope the eggs are all fertile. We have one or two very old hens and the farmer feels they may no longer be fertile, so we need to select the eggs carefully.