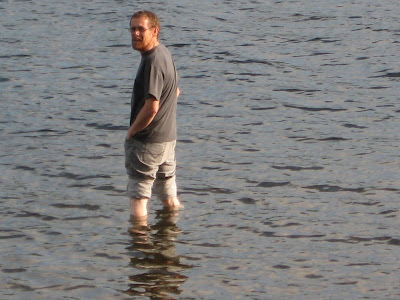 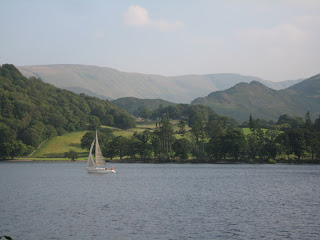 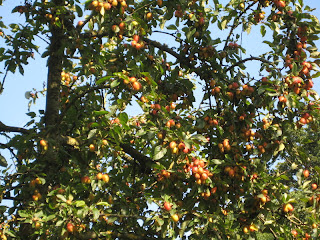 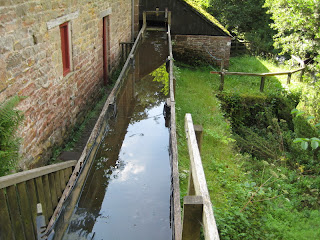 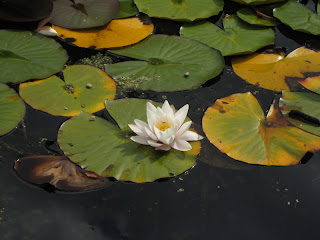 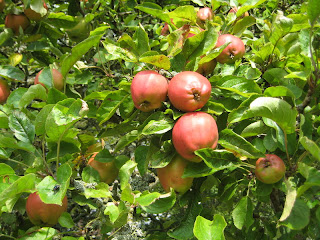 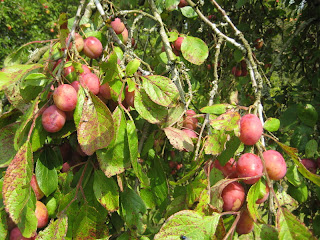 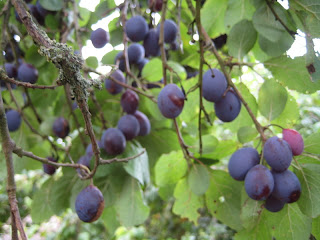 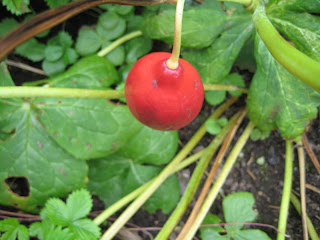 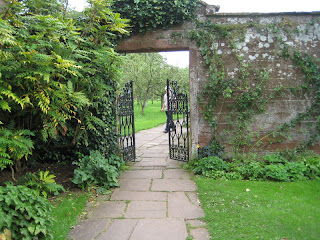 ...and this one quite spontaneous, quite the best kind.

My son, Dominic, and his wife called and suggested I went with them to the National Trust Garden at Acorn Bank near Penrith. So I made a quick lunch for us all and then we were off.

Sadly our journey there was marred by a terrible accident on the A66, which must have occurred only minutes before we passed on the other carriageway. The sight was dreadful and it was obvious that there were fatalities. (Two people were killed and one seriously injured) This sort of occasion stays with one for days - not least because the whole world goes on as though nothing has happened. So, to some extent,
it was a very sombre afternoon.

The A66 was closed in both directions until the early hours of this morning, so we had to find an alternative way to come home. Acorn Bank gardens were lovely - peaceful, tranquil, full of sunlight - a perfect foil for our sadness. The orchard was burgeoning with fruit - apples, plums and pears. The herb garden had most unusual herbs (the big red 'berry' is a mandrake) and the herbaceous borders, although past their best, hinted at how beautiful they had been.

Then there was the watermill - a quarter of a mile away. It was a lovely old building, an overshot mill with an interesting wooden conduit, all in working order although not working when we were there. Red squirrels, otters, nuthatches were around although we didn't see any (they no doubt heard us coming.)

Then last, but by no means least, there was tea, coffee and home made cake in the walled courtyard.

We came home through the Lakes, which were particularly beautiful in the early Autumn sunlight. Dominic excelled himself by paddling up to his knees in Ullswater (some mothers do have 'em) in spite of our protests. But the views of the surrounding mountains were spectacular.

We called in to see P, who is recovering from a broken ankle, and I think we cheered him up a bit. Then it was the long drive home, with a short detour to Grange over Sands for a bag of salty, vinegary chips each - it's a long time since I had that and it was jolly good too.
Posted by The Weaver of Grass at 07:48

Like the wild man of the hills, Dominic in his element!

These photo are my "tourist" mindset of were you live. How great that places/views like this are really exist. So beautiful !
And how wonderful that you were able spontaneously go visit this lovely place.

A full day out - beauty, fun and tragedy. I'm like you - always haunted by crashes like that (who were they, where were they going, what will happen to loved ones left behind...).
x

Thankyou so much for sharing that lovely day out with us Pat. I am glad those beautiful surroundings helped to lift the mood after that awful accident. Something like that stays in the mind for ages after the event. I am also glad that Dominic is not too grown up to go for a paddle!

I understand what you are saying about seeing the accident. I can't think of anything else to say.

I know what you mean , it is impossible to ignore such a terrible event. As a society we accept road deaths in such a blaze way except of course if it affects us personally.

It is lovely to spend time with family especially when they have flown the nest.

You do live in such a great place within reach of so many beautiful places, I know that are very well.

Loved the pictures of the garden. We recently visited a botanic garden with fruit ripening and there was sign posted: $250 fine for picking fruit.

As for the darker side of the day, at a rough guesstimate I pass a serious accident about 1 in 4 times I use the A66. How deadly does a road have to be for the dangers to be deemed unacceptable?

What a lovely day out. I have never seen a "live" (!) Mandrake before. An unusual herb to find planted these days. A lovely place to visit. One of these years we will actually STAY in the Lake District - it was always just an overnight stop (NT campsite at Windermere) on the way up to or back from Scotland when the children were younger.

My eldest is currently at the University of Cumbria and was on campus in Penrith last year. In his first week, he did a kayak and bivvy weekend on Ullswater. I was soooooooooooo jealous!!!

Yes, I have to admit that this is a very beautiful area and although we live in the Dales, the Lakes are only a short drive away. Such beauty - and already the crowds are thinning as the children go back to school. Thank you for the comments.

I could have crawled, quite happily, into any one of those photos. They are just as I imagine an English garden to be. This morning I went out to pick some of our plums and found that they were all gone. It's clear that the raccoon that we caught has brothers and sisters and they've moved into our orchard.

I see that the dead were two soldiers from Catterick. As if Afghanistan weren't enough. Very sad.

The place to be when the chips are down?! LOL