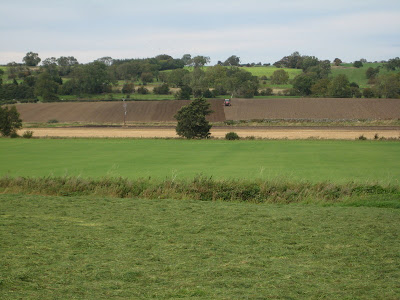 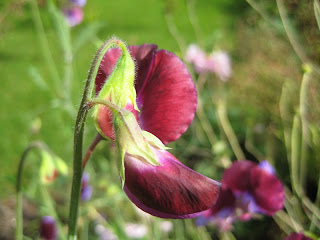 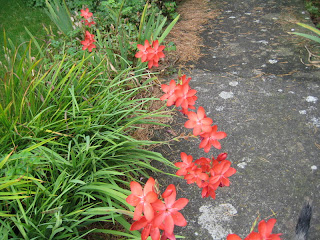 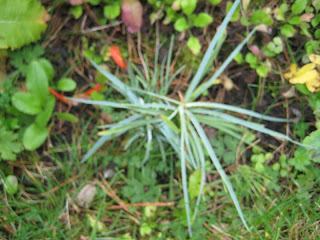 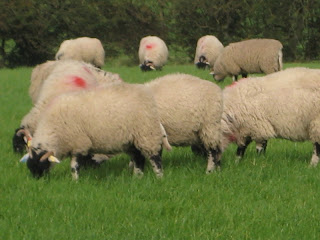 The sheep have begun to arrive. They are hefted sheep - this means that they live on the tops of the Buttertubs Pass between Wensleydale and Swaledale and the mothers teach their young to stay in the designated area. They pass this information on from one generation to the next (although one or two always go missing to pastures new). I have taken a photograph to show you but not a single sheep looked up!

A Swaledale is recognisable by its white nose. All noses were deeply buried in the lush green grass; hardly surprising when you consider they have spent months on the slopes where the grass is quite sparse. They will not have seen the like of this before and will gorge themselves for a day or two (usually resulting in a bout of diarrhoea) before settling down for the winter.

On our walk this afternoon I managed to take a photograph which encapsulates all that is going on in farming around here today. This is our neighbour's farm. In the foreground there is grass cut ready for baling up into late-crop silage for the Winter Then, beyond the beck (the line of longer grass) the new green shoots of next year's barley crop are just coming through. Beyond that is a strip of stubble where the corn has been cut and the straw led away. This stubble will be waiting for eventual ploughing in. In the far distance our neighbour is ploughing a big field ready to sow with some crop before the Winter. And beyond that the green fields to the horizon - all of which will house sheep over the Winter.

While we are on the subject, I notice that my calendar for this month has a picture
of a field of corn which has been harvested. The straw has been baled up to be collected and used for feed/bedding over the Winter. However, the caption says 'Hay Bales near Pickering, North Yorkshire'. So here - once and for all - is the difference between Hay and Straw. Hay is grass which has been cut and dried in the sun until it is brittle and golden. Then (very sweet-smelling) it is baled up and stored for feed in the Winter. (Our hay barn is a favourite place for hedgehogs to over-winter as it gets nice and warm. The cats use it as their winter home too).
Straw is the stalks of any corn crop (oats, barley, wheat), left after the ears are harvested. This is baled up and taken to the farm where it is used either for bedding or - often - chopped up and added to animal feed.

Coming back home through the front garden, I notice that the carnation/pink given to me as a present by Rosemary (Share my Garden on my sidebar) has made a nice sturdy little plant before Winter. And the lovely 'wild' sweet pea plant, given to me by N and S (if you are reading this N and S - thank you) is still flourishing and making lots of nice seed pods which I hope to dry so that I can grow my own next year. All over the garden clumps of Schizostylus are in full bloom. I do love their cheerful red colour - it brightens up the garden no end.

##I have just been told off by the farmer because the green in the middle distance (beyond the beck) is not next year's barley coming up, it is grass which is growing well and may very well get another cut if the weather holds - as it is forecast to do. The Times says it will be warmer here than in Hawaii by the weekend. How about that?
Posted by The Weaver of Grass at 06:48

You are lucky - still having colour in your garden at this time of year. I'm definitely a Spring planter. By next March/April time there'll be lots of colour in the offing but right now it's all evergreens and brown seed heads! (Unless you count the bright orange pyracantha berries on the shed wall!)

Thanks again for the wonderful walk around the farms. I know that hay smells lovely. There is also straw here around, but we have more grassland than arable land, which you can find in the east of our country.
Thanks for your visit. I didn't know that the kangaroo was considered to be a pest. They have natural enemies like the dingo.Well I'll ask my daughter.

Pretty sheep...their wool looks so soft! And do you ladies have a seed-swap organised? If so, I'd love to join :)

It's not easy getting colour in the garden right through to autumn. The sweet peas are a wonderful colour and the little starry flower by the path is so pretty. I treated myself to an alpine pink this year and it is still producing flowers.
The peaceful rural scene in your first photo belies all the hard work that goes on there.
The sheep look in lovely condition and are certainly enjoying themselves.

Yes, Weaver, our worlds are so different! And that is one of the many reasons I love to stop by and see what you are up to in yours! Lovely, as always!

Lovely afternoon walk.
You live in one of the the most beautiful places.

The wild Sweet Pea is beautiful and a plant/flower that I have always loved. I have planted, not the wild but from seed pack in every home I have lived in. Since moving back to the Snoran Desert I have not planted any, too many wild critters would eat any new green leaf. But I do have a small fenced in area that I will try and plant some this spring.
Thanks for the reminder of what a lovely plant this is.

How I wish I could say, "the sheep have begun to arrive"! One of my favourite places on the planet is a little yarn shop in Waternish on Skye. Up on a hill above the sea, with its very own flock of sheep that provide the wool that is dyed in marvelous colours from the flowers and herbs in the garden. A better life I cannot imagine.

However.... I'm not sure Edward would co-exist well with these wooly friends.

Gorgeous colour of sweet pea...I love it!My perennial one is quite pale and a bit pasty!!

See, this is what I mean Pat, you teach me such interesting things about farming! I had no idea of the difference between hay and straw until now, thanks.

The sheep do look healthy - were they really those sweet gamboling lambs just a few months ago, amazing!
Buttertubs Pass, another of those lovely names only found in the English countryside.

Lucky hedgehogs and kitties having your cozy hay barn as their Winter home. I do hope the Winter is not too severe there this year.

Fascinating as always. Loved your remarks on the sheep.

If they had been next year's barley they would certainly have been getting a move on!

Thank you for your comments. Sorry about the grass/barley mistake!

So nice to catch up on all the doings on your and surrounding farms. Good looking sheep and beautiful flowers still so late in the season. Enjoy your Indian summer while it lasts.

Lovely flowers.. It looks like the sheep are having a good time. I too live close to farms, but the ones here are so very different from what you have. I think the straw we have here comes from dried corn stalks.

I'm always struck by how similar the weather is where you are and here in the Pacific Northwest. The flowers aren't quite as showy now, but everything is still green with spots of brilliant colors.