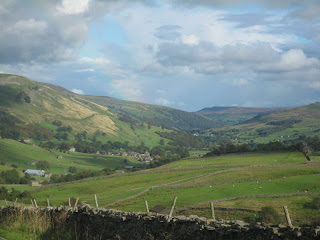 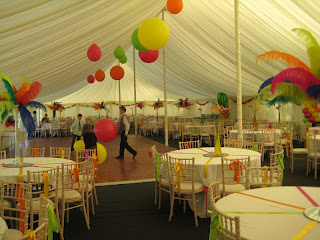 Up here at the bottom of the Dale it was a lovely sunny afternoon. But it was chilly, so on Saturday I bought myself a fine wool jumper to wear under my linen jacket. Yesterday morning was so chilly that I also added my thermal vest!!

At the top of the Dale, where the celebrations were being held it was also a sunny day. In between we drove through torrential downpours and the river, which we followed all the way, was banking. I was very pleased that I had my warm clothes hidden under my linen jacket.

As we approached we saw all these hardy young things in their finery - mostly strapless or thin-strapped long dresses with no cardigans. Most men dressed in their best suits (they are a conventional lot the men up the Dale).

I have to say that the marquee was absolutely lovely. The family had had a wedding reception in it the evening before, so it was decorated for a wedding anyway. Now Mum and Dad were celebrating their Ruby wedding in it. Earlier in the year they had celebrated by spending a holiday in NewZealand (missing the earthquake by only a few days).

Sadly, apart from the 'bride' and 'groom' and one other couple, the farmer and I knew no-one there. We chatted to those we knew, made our donation to the Air Ambulance and crept away before the arrival of the hog roast. We drove home the long way round and called in Reeth for an ice cream. Already the Dale has begun to wind down for Autumn. The schools are back and there were few tourists about. It is a short season up here.

But the scenery was magnificent even if there were few people around to enjoy it.
Posted by The Weaver of Grass at 03:07

I had to Google to check up on a Ruby anniversary, 40 years. Now that's scary. Next year is my husband's and my 35th.

It looks like a wonderful venue for such an event, but like you I shiver at the thought of those strapless dresses.

What a lovely post of many things, Weaver! The weather is changing on a ha'penny at the moment - bright and warm, dark and cold, wet and windy ad infinitum - and knowing what to wear to be 'just right' seems beyond me at the moment.

I love all dressed-up 'proper' events, and never cease to marvel at the men in their two and three pieces, and the women in wisps, whatever the weather. What are they ever going to replace the suit with?

The view across the Dale is beautiful Pat, and the marquee looked splendid - what a lovely setting, inside and out.
Thank heaven for thermal vests!! I don't feel comfortable if I haven't chosen the right number of layers. We had intermittent heavy downpours yesterday too and I think there are more to come. Glad I haven't filled the garden with drought tolerant plants!

I think the dales are probably more beautiful when there aren't hordes tourists around.
The weather has rapidly changed here too (Australia)- 32C today and down to 11C at night. A week ago it was only 24C. Hope that doesn't mean a very hot Summer for us and a very cold Winter for you.
cheers
Helen
PS. We are coming up to our 40th in January but there won't be a huge party. Too expensive.

Gosh, I completely forgot about our Ruby Wedding Anniv. - it was several years back - guess everyone else forgot it too!!!!!

Glad you were dressed for the weather - those young gals may be nursing the sniffles this week!

The Dales must be beautiful even at this time of year - I would prefer to be a tourist now without the crowds. I can imagine the Lake District also - much different from when we were cavorting with all those lambs in April!!!!

What a pretty party setting - I think it's important to celebrate life's milestones, and 40 years is significant one.

I went to a party in an open sided marquee the weekend before last and was in a sleeveless dress- I was freezing and had to borrow a big jumper to put over the top! The picture of the valley looks very beautiful.

The marquee is lovely, Pat, but that pastoral view across the Dale is just to sigh for...

So Ruby wedding is the fortieth anniversary! Thanks for your always nice photos!Have a great week.

I think nowadays, "how can they cope with the cold"...but then I remember my sainted mother call after me as I sneaked out the door..."what are you wearing?" she should have said..."what are you not wearing?!"

I am still amazed over the thought of you needing a "A fine wool jumper"and "a thermal vest".
Where we live could not be so different. Our temps for the next few days will be 90/75 perfect fall weather for Tucson. Not a sweater in sight.

Lovely photos of a special day.

Lovely - despite the weather!

What an Autumn VIEW!


Well, I'm in a NEW place & NEW lifestyle!
Do YOU know WHO I am? WHERE I live?
I'm not quite sure.
but boat Kitty is happy and so are we.
Stop by to see the view-

I'm like you with the sweater, vest, and jacket. I love the feeling of layers for one thing and then the way I can subtract if need be. Our weather is all over the place and given half a chance I break out the sweaters, or jumpers.

The thing is you don't want to end up getting a chill do you?

(I love the word chill and it always seemed to cover every ill when we were children -"oh, you've got a chill from yesterday") but nobody seems to use it nowadays.

Glad you felt you could sneak away. I know the feeling.

look at that stunning photograph of the dale!!!! steven

Yes, the view of Swaledale is magnificent, isn't it? I suppose that living up here does make one sometimes overlook the fact.

Thank you for your comments.

Your hills are not unlike the rolling coastal foothills we have here in California. The main difference is how green yours are! Ours are parched brown, much in need of rain. Your picture could be a postcard, it's that pretty.