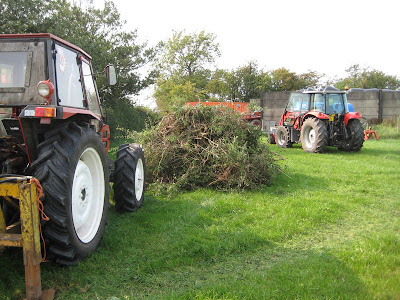 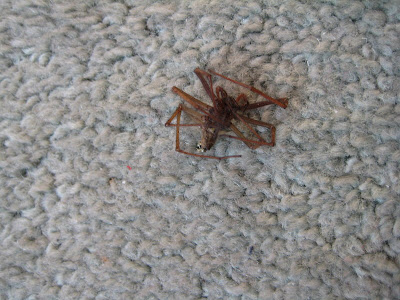 The day did not begin auspiciously when I stepped out of bed and saw this on the carpet at MY side! Where had it spent the night before it curled up and popped its clogs?

I decided that today was the day I would make a large batch of Welsh Rarebit - divide it into quarters, have one quarter as part of our lunch and freeze the other three quarters. It is a bit fiddly and by the time I had finished I had used just about every receptacle in the kitchen so an extra dishwasher run today.

After lunch I needed to go to the Wensleydale Sheep shop just down the road to talk about wool for a friend, so I took Tess in the front seat of the car, well strapped in with the seat belt (otherwise a warning buzz keeps going off) and after going to the shop Tess and I walked along a bit of the lane we rarely go on. It was a glorious afternoon - so peaceful. On the whole mile there are only six houses and I really don't think anyone was at home in any of them.

Tired after my walk I needed a sit down but it had to be a short one. The last of my grandchildren, my second grand daughter, goes off to Bristol University this week end for the first time. I had promised to bake her a cake and as her Dad is taking her tomorrow evening I thought I had better get it done today.

Then, as the house was full of the smell of baking, I thought the farmer would come in hungry at tea time and think I had baked a cake for him! So I made a batch of what I intended to be butterfly cakes, only to find out I had no icing sugar left. In the end I put a blob of bramble and apple jelly on to each one and stuck the 'wings' in that. He said they were delicious but I so rarely bake cake I think he would have said that about anything.

After all that I was jolly pleased to sit down after tea. The farmer has gone out again. He has cut down and grubbed up a hedge and created a new gateway into a new little field we have made. Then he burnt the pile of greenery out of the way because a load of gravel for the new gateway is coming at crack of dawn tomorrow. It's all go here.
Posted by The Weaver of Grass at 10:50

Lovely news Pat..Alan has just cut down the big patch of sweet corn and cleaned up the soil in the back field. Another patch is still producing but if an early frost comes we may have to quickly get them in.I'm making corn fritters with the extra and freezing them for lunches. Basically a pancake mix with the cooked corn thrown in...nothing too complicated!

I guess it is now the time of year when those big old spiders want inside. I found a huge tarantula on my porch right by the front door yesterday. They don't make me happy.

There were about eight huge spiders in our sink when we got back from our holiday and they weren't all dead!

I hope your farmer plants more hedge for the wildlife after he grubs it up. Hedges are vital for small mammals and butterflies.

I don't like spiders either Pat, and how does 'Towanda' cope with tarantulas? I like furry things but not those with eight legs!!
You had a busy day by the sound of it and certainly know the way to your man's heart!

noticing the dead spider... made me laugh

A very busy day indeed.
I know how you feel when you see a dead or almost dead spider (or scorpion) and wonder where it had been.

@heather we love our Tarantulas in Arizona. I don't like to look at them but they eat scorpions so I love them.

Ah, my mother used to make butterfly buns sometimes, though she always complained that my brother and I ate most of them before they had the chance to turn into butterflies!

What a busy day. I've been at work. Nowhere near so exciting :(

I hope your granddaughter has a wonderful time at Bristol Uni. What an exciting time!

What a lovely, busy day, full of work and good food. I spent the time after work pulling sucker trees out of the ponds - the burn pile is enormous! We won't be able to burn until the rains start toward the end of October, but the goats will enjoy the leaves and bark til then.

My goodness you were busy today. I love butterfly cakes with butter icing. I do NOT like spiders.

I wish everyone would stop writing about food! I'm trying to lose my diner-gained-pounds...
x

Mention of tarantulas had made all thought of being scared of spiders get in proportion. Thanks for the comments. I shall try those pancakes, Gerry.

What a busy day you've had, Pat, but it's good to see you engaging life around every nook and corner. One of these days, I'm going to stop in and join you for one of those cakes and a spot of tea.

I could smell the baking from here. Welsh Rarebit - favourite of mine