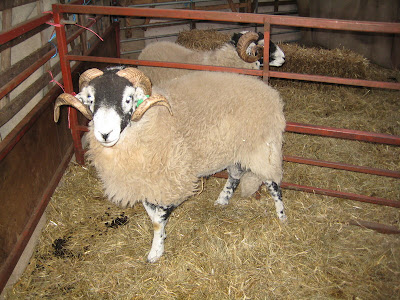 It is almost time for the ewes to be put to the ram for April lambing. The Swaledale ewes roam on the tops between Wensleydale and Swaledale and become hefted (they know their own territory and stick to it, and pass this knowledge on to their offspring). So the rams are being brought up to tip top condition ready for the fray! We will eventually over-winter these breeding ewes (maybe next year), so we went over to have a look at the rams. They are magnificent creatures with fantastic horns. Sometimes these horns press so near to their faces that they have to be cut away. A dozen or so of them were indoors getting special rations and having chiropody (their feet need to be in pristine condition). Some of them were penned individually like the one in the photograph and most had carpet draped over the hurdles separating them, to stop them fighting through the bars! Some of the rams have cost thousands of pounds so they need to do the job properly.

At home the first of the dry cows have come into winter housing. We no longer have dairy cows ourselves but our neighbouring farmer and friend has a large herd of Holstein cows and we help with the overwintering. The dairy herd is already indoors and for the dry cows to stay out the ground has to be pretty dry, otherwise they have such foot problems. This year has been so very wet.
The rainfall figures for the last four months make soggy reading:-
July 123mm (5 inches); August 95mm (4 inches); September 166 mm (over 6 inches); October 84mm (over 3 inches) - so you can imagine, our fields are absolutely sodden, and the grass is pretty devoid of nutrients.
So the first five dry cows came in on Monday. They came into their winter home, looked around, chose a space and lay down - all within five minutes. Now they are in residence. Soon some in-calf heifers will join them (all five of the cows are in-calf). When they arrive there will be a bit of a fuss and a bit of jostling for superiority, but they'll soon settle.
I love it when the loose housing is full for winter. We keep our car in a garage right next to this and every time I go to get the car out they come to see what is happening - cows are such curious creatures.
When we had dairy cows they were Friesians - but these are Holsteins. They are what I would call raw boned - much more bony than Friesians, although when I said to their owner that they were bony he was quite hurt. Like all farmers he loves his cows and considers them part of his family.
Today the farmer and I have been to get our flu jabs and have our blood pressure taken - all on a conveyor-belt action; we were in and out of the surgery in ten minutes.
Posted by The Weaver of Grass at 06:23

Weaver, Being retired from farm life for the past 10 & 1/2 years, I can relate to the dry cows and the work involved in looking after all the animals. I'm now happy to just read about it. Oh! how I hated going out into those early cold mornings in the winter time!

But, you keep on writing and I will keep on reading, here in my warm "Reading Corner."

I hated our winter it was so cold!!! There's a trend here towards the big holsteins but they're also harder on the land. I prefer the Fresians just that little bit smaller. My neighbour has finished lambing this lot will be headed for the works I would think fairly soon. Hope you are staying warm!!!
Liz

It's so wonderful to be able to read all about your life, Weaver, To share in your day-to-day life.

If more of us could understand how much goes into keeping a farm working maybe there would be more respect and understand why our food cost so much.
Are these farmer's markets of any help to you or do you think they are a good way of bring country folk and townie together?

Best wishes and a hot cuppa..

I agree with annie!
I loved this post! The rams are so cool! We dont have any here on our farm and we raise beef cattle, so its so neat to read about the other animals and how it all works!

Thank you for your visit. You sound like one really busy woman. How do you find time to blog. Being a farmer's wife is a full time job.

My husband had his flu shot also. I no longer get one, I had a reaction about ten years ago and our family doctor said you have to weight the good against the bad, and he didn't think I should try it again. So I try to use Lysol spray a lot and wash my hands a lot, and tell everyone I'm around to get their shots. LOL

Everybody looks so snug and warm...ready for the winter. You are so fortunate to share your life with these creatures.

I'm sure your neighbour loves his cows but I have to agree that Holstiens are boney!
Its still rainy here, but our hardy Gascons and Aubracs stay out all year round, with their calves, which they seem to have at any time. I love the way the calves are raised with their mothers, but although I'm a not a veggie I do shy away from the veal in the butchers, although it looks lovely.
O-L-L... You've given me the wobbles about my flu jab next week!MOH had a bad reaction (he caught the flu!) when he had one a few years ago...never had once since and I only became eligible last month but as we're going to the UK in Dec. really thought we should bite the bullet and have them.

I, too, love to read about the workings of the farm. It's always been a bit of a mystery to me. Born and bred in London. We worry about having chickens, let alone cows! So much to do. Keep up your wonderful blog.

Was a bit worried when I took Tessa B for a walk - Ram-boy seemed more than a little interested for a few seconds!

When I was 13 I was going to be a farmer. Life wobbled off in other directions, but the fascination has never quite evaporated. So, fascinating to read such day-to-day accounts.

Gramma ann - I didn't become a farmer's wife until fifteen years ago so there is still a novelty factor for me. But I know what you mean about the work on cold wet mornings!

annie wicking - I am still having difficulty leaving a comment on your site but I do enjoy what you write.

annie - farmers' markets favour those who grow their own produce and butcher their own meat I think. We have one here once a month but it bears no relation to the ones I have seen in Canada and the US.