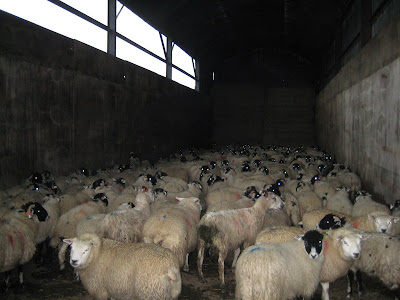 The fields on the farm are very wet. Although we are at 600 feet asl, the land is quite low lying and is cut through by the beck, so it does tend to retain the rainwater. In some places the limestone is quite near the surface and there is a lot of heavy clay. It is in the gateways that the mud builds up; even if the gates are left open for the livestock to roam at will, they still seem to congregate in the gateways. Last week a friend lost her boot in gateway mud and put her socked foot down to keep her balance and then lost the other boot. She walked back to the farm in her stockinged feet as she didn't want to ge the inside of her boots dirty too!
Wet land leads to foot problems in sheep (if there is anything "going round" sheep will catch it - some say sheep are born to die.) Over the last few weeks an increasing number of Swaledale sheep, which we are over-wintering, have begun to limp badly. They are used to rambling about on the rocky tops in Summer and they are not used to this damp land, but the tops get too bleak and snowy in winter, so they have to come down.
On Tuesday the owners came to doctor them all and we had to get them into the barn, then create a passage where they could be caught one-by-one, drenched and given a pedicure and then released back into the field. All went well and we are hoping that the majority of foot problems will soon be cured (it doesn't happen straight away as often there are abcesses which need spraying with antibiotic.)
Most of the sheep are pedigree Swaledales, bred to keep the breed alive and in the hope of producing a prize-winning ram. But there are also some Leicesters (there is one quite prominent in the photograph, along with some texel ewes. The Swaledales have the characteristic black faces and white noses.) There are also some mules (Swaledale crossed with Leicester ram). Twenty of the best mules were side-tracked into another field close to the farm house. They look very settled and happy there and are awaiting the arrival (although they do not know it!) of a Texel Ram. This should produce "fat lambs" for sale at Auction Mart next year. He will be here any day so watch this space for a photo of him in all his glory.
The last of the eatage heifers have gone now, so all the gates have been opened and the sheep are totally free to roam wherever they like on the farm. As they are used to complete freedom they will be happy with this, although no doubt some will still feel the need to get out. Earlier this week our neighbouring farmer spotted two of his sheep in with ours and with a lot of effort managed to separate and catch them. He popped them into one of our little field barns and went to fetch his dog to take them back to their own flock. In the meantime David heard sheep in the barn and opened the door, thinking they had got in by mistake. It was only as they were joyfully legging it out into the freedom of the field again that he noticed a red mark on their backs (ours are all marked blue) - so they will stay with our sheep for the forseeable future.
Posted by The Weaver of Grass at 03:12

Oh dear - That was a woopsie!

We used to live on a muddy island. I'm well used to the lost-boot scenario.

Mud is the same everywhere, isn't it, dragonstar?

No sheep in Manhattan.
That
s why I enjoy your blog so much - it takes me to a different world.

I always enjoy reading your blog and learning about life in our par of this big world! You articulate your words so well you just put me right there! Love the info on sheep, thats one animal I dont know alot about!

Sheep are one animal I don't know much about although we did once have a rather grumpy ram and a few ewes when growing up on the farm. Our steers were prone to foot-rot in the spring when it was so wet too. I enjoyed this post Weaver.

Enjoyed reading about your sheep... especially those who gleefully made the "great escape"!

Thanks for that insight into sheep farming. Hope the foot problems go soon. When feet are out of sorts it affects the rest of the body.

It must be habit and training that keeps them congregating around open gates - we're all creatures of habit!

I can well imagine the difficulties dampness can present. Can't drainage help?

Fascinating. I love learning about your sheep. And, the photograph is delightful!

I love that photograph. I clicked on it to enlarge it and it was kind of eerie, with all those glowing eyes in the dark as far back as you can see. Something strange and mysterious about it.

Oh yes to the mud! The gateway to our field is so muddy I think I will go sliding away one day soon. we are on stone and generally free draining so in the summer I forget about mud and mire, but here they are again.

Read with great interest by this farmer (long) manqué, as ever!

Kyfarmlife - I must say that when we visit US we ararely see sheep. Do you not eat much lamb over there?

Yes, Janice, our cattle get bad feet too in the wet. Somehow cattle are badly designed so that they are very heavy on their feet!

Too right, Carol we are all creatures of habit.

Thanks for the comment Anil - have just visited your blog - how colourful your country is compared with ours! This morning, with the fall of snow, before the sun fully rose we were in a world of black and white.

Mornin! You dont see lamb much in the resturants here, and in fact, I dont believe you can find it in every grocery??? Im not sure, maybe depends on where you live? its found more in the "high end" resturants, however we found this wonderful rest about an hour from us that is just awesome and the lamb is out of this world!!!!! We usually buy one or two lambs for slaughter each year. I think with any animal the gateways get nasty and mucky, even with my horses...just part of life, but it sure causes a headache doesnt it? Hoof problems, and a nasty mess to get around in! YUCK.

Insightful blog on sheep Weaver. I love learning with you!! Sounds like a school programme. 'Learning with Weaver'. Lol.

It is so wet here we have to be careful wherever we walk. I slipped over yesterday while carrying a big log down from the veg garden, but that was on ice!