Hard work in the past! 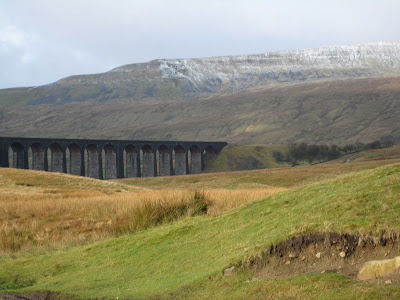 To Windermere yesterday from Wensleydale. First of all to Hawes and then a sharp turn South along the road to Ingleton and the lovely green pastures of the Trough of Bowland.

The Hawes to Ingleton road goes through some very wild country almost empty of habitation apart from the odd isolated farmhouse. It is wonderfully scenic and wonderfully bleak, especially as it goes over Blea Moor. Here, suddenly, the Ribblehead Viaduct on the Settle to Carlisle Raillway comes into view. The Viaduct spans Batty Moss - a huge boggy area and has the scenic, snow-topped Whernside (one of the Three Peaks) in the back ground.

Mike harding talks about the viaduct in his book "Walking the Dales". This line was the last one to be built by hand rather than using machinery - of as Mike puts it, by "handraulics".

When it was being built this wild, empty landscape was home to three thousand people living rough. When we stopped to look at it yesterday it was bleak but then the winters were a lot worse and it is no surprise that over two hundred people died in the building of it. Many of those who died, itinerant navvies, were only identifiable by their nicknames - Wheelbarrow Jack; One-eyed Charlie and the like.

It took seven years to build and each navvy was supplied with 4 pounds of beef and 14 pints of ale a day as part of their wages. Mike quotes a lovely old navvy song he found in Manchester Central Library some years ago, called "Navvy on the Line" and I quote it here in memory of all those men who put up with appalling conditions such as we can barely imagine to build what is now seen as little more thana tourist attraction. My maternal great,great grandfather was a navvy. He appears on the census in the eighteen hundreds at various places as he moved with the railway builders. Then suddenly you can't find his name on any census anywhere.

So here's to you William Everton, wherever you ended up. Let's hope your life was bearable and that you didn't come to a terrible death in the bleak, boggy Batty Moss.

Oh I am a navvy bold
And I tramp the country round, Sir,
Seeking for a job of work
Where any can be found, sir.
I left my native home
My friends and habitation
And went to seek a job of work
Upon the navigation.

Chorus I am a navvy don't you see
I love beer in my prime
Because I am a navvy
That is working on the line.
Posted by The Weaver of Grass at 07:40

This reminds me a great deal of "The Last Spike" by Pierre Burton regarding the laying of the Canadian railways. As you mention the conditions were appalling here too. Now trains are almost a thing of the past...

What a lot we take for granted these days, with barely a thought as to how it came about. We have become softened with modern living and I can remember much colder winters than those we get now - ice on the inside of the bedroom window - but even that is better than those poor souls building the viaduct knew. Thankyou for visiting my blog - I will post photos of my book when it's done but I have to rely on my daughter until I get my digital camera and she is very busy at present and I try not to bother her too often.

I love that term.

Great post, grassweaver! I love that whole area. Do you know the 'navvys' burial ground' church in Chapel-le-Dale at the foot of Ingleborough?

Sad how many lives were lost to make things better for the following generations. And now the rails are almost a thing of the past.

well thankfully our railways in the UK are still functioning, if not perfectly then at least better than in the US... I love that area of the country, lovely photo and thanks for the reminder about how hard life was for the navvies

Yes Janice - we ride over these tracks and rarely give a thought to the blood, sweat and tears that went into their making.

Lovely to hear from you Heather - I bought my digital camera about a year ago and cannot believe how I ever managed without it. I can take a photo and send it round to my friends within five minutes. The wonders of modern technology - and aren't we good to be joining it rather than sitting in our slippers by the fire!!!

Yes Travis - its a good word. Mike harding heard it said by an old navvy from Cork.

Yes solitary walker - I do know the church at Chapel le Dale - in fact we passed it yesterday. There is a fitting memorial to the navvies who died - although I understand a lot who died were unknown and were buried in Batty Moss - very sad.

Yes, gramma ann - will visit your blog again now that it is open again.

Thanks c.g.p. - we do need reminding now and again I think of how hard life was for them.

Oh my, the snow on the mountain in the picture - it's quite breathtaking in its severity.

Thanks for the commiserations Barbara - two days and i shall be back to normal. (whatever that is)

What a fascinating post. So glad that someone who writes as well as you do is reminding us - all of us, wherever we are - that we owe a great debt to ancestors who often sacrificed greatly to enhance the lives of future generations - our lives. A most worthy subject. Thank you.

I've always been in awe of the engineering and sheer hard physical work that went into these things.

But the way the workers had to live, and the privations they endured - I think we all need reminding from time to time.

Thanks everyone for the comments - am laid low with a bug.

That is a wonderful part of the country! I particularly like the wonderful Wensleydale cheese from the Hawes creamery. By the way, no one has mentioned the Harry Potter connection with this viaduct... can you see the Hogwarts Express steaming over it?

Lovely to see this photo.
I did the '3 Peaks Walk' anti-clockwise with a group. We chose Ribblehead as our start/finish point. We were dressed for a Himalayan expidition.
Going up the first mountain, Whernside, a man walking a beagle and smoking a pipe quickly overtook us.

Lovely photo Weaver. We do take so much for granted and it's so good to be reminded of the past and the dreadful conditions the navvys had to endure for our benefit. Wonderful post.