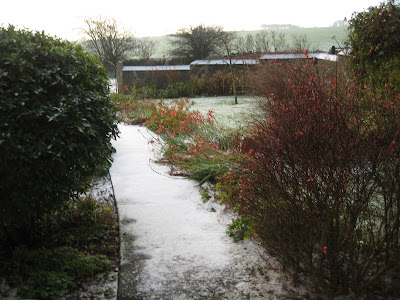 Footprints in the Snow!

An early fall of snow takes the farm by surprise. We feel reluctant to go out in it, but when we do make the effort our walk has its rewards.

The thin covering of lying snow has become a note book of which animals frequent the farm when we are not looking. A fox has been to the hen house overnight. His long, straight tracks go to the door and then back to the window where he has got up on his hind legs to look in on the perching hens. (oh! what a tremor must have passed along the perch). The dogs' noses work overtime on his tracks and there is much barking and growling. It is easy to be brave when you are not face-to-face with a wild dog fox.

Pheasant have criss-crossed the pasture from hedge to hedge in slow, leisurely fashion, their tracks neat, measured and perfectly formed. They learn very early on in their often tragically short lives that it is safer to walk than to fly and risk running the gauntlet of the guns.

Where bits of grass stick up out of the snow rabbit tracks abound. There a buck rabbit's big feet, there the tiny tracks of the newest arrivals - all searching for something - anything - green to eat.

A hare has run diagonally across the meadow, his footprints much larger than those of his cousins and his purposeful tracks indicating that he has passed through rather than stopped to look for breakfast.

Two roe deer have jumped over the wall into the meadow and walked towards the hay rack. Then something has startled them - or they have changed their minds - and they have gone back the way they came.

A rat's track crosses the yard from the hen house to the hay barn; tiny, neat claw marks and the tell-tale long tail trailing behind. A timely reminder to the farmer to renew the rat poison under the hen house.

Then of course there are the farm cats. From the snug warmth of the hay barn their paw prints come to the kitchen door and back to the barn and out again in an "are they up yet?", "Do they realise we want our breakfast?" kind of way.

By ten o'clock the snow is gone and the sun is shining. The comings and goings of all the wild things will be a mystery again until the next snowfall.
Posted by The Weaver of Grass at 02:07

Lovely! A scattering of snow told you so much.
Oh yes, typical cat behaviour. And I think I can hear your dogs! We had two mongrels (well, their mother was a Springer, but their dad...) They'd catch and kill foxes - even a mink once - but there was one wily old dog fox that used to sit and laugh at them.

Brrrr...your photo looks quite chilly. Where I grew up as a child, we had snow - LOTS of snow. I thought moving south to Georgia would bring an end to the snow, which it has, but it's still quite cold. I actually miss the excitement of the first winter snowfall. I love your description of all the critters that left telltale paw prints to show their paths.

Wily is the right word for an old dog fox Dragonstar - that is how they have survived for so long.

I love the first snowfall, Debra, but am not too keen to go out in it - also afraid of falling if the ground is icy.

This was such a nostalgic blog. I could almost smell the snow on the hills....I really do think cold weather has a smell all of it's own.
Time for a rib-sticking stew perhaps??

What a lovely post - it was like a poem and I could 'see' all those tracks and the creatures that made them. I discovered your blog via another and will certainly visit again - it is so interesting. I am off now to read more, thankyou.

We had a dusting of snow this week-end also. I can just picture the animals as they criss-crossed across your farm. That was an enjoyable read.

We had snow too!
I'm so glad I didn't have to go out today. It was lovely to watch the snow fall while making my bread knowing that my family was safe sleeping in their beds.

Best wishes to you all down on the farm. Keep safe my dear friend.

Strange how the mind interprets what you see and creates illusions. I could not for the life of me work out where that photo was taken. I thought the path was a waterway, and the snow topped wall three adjacent blocks of flats with snow on their roofs. Then all of a sudden it made sense!

I was enchanted by this post. I wish I knew as much about tracks as you do. Thanks.
The snow hasn't hit Lancashire yet although I did get covered in hail and freezing rain when I went birding this morning - well worth it though.

When our youngest daughter was little she and I used to go out and follow the tracks of the barn cats into the woods and fields after a snow. We don't get snow very often here in the Pacific Northwest of the US so we treasure it when it comes.

I have always loved the way you describe a scene Weaver Words can be just as good as a picture. We don't have foxes here I know they do in Australia. My hens are safe as long as they stay out of the hawks' gaze. Looks very chilly there now. We've had the opposite. Lack of rain and the pasture isn't doing very well.
Stay warm
Liz

Rib-sticking stew it is for dinner Jo!

Hi Heather. Nice of you to call and glad you enjoyed my writing. Shall call and see you now.

Hi gramma ann - I don.t seem to be able to visit you any more and I did enjoy your blog. Have you gone underground?

Thanks annie. I often find it impossible to leave a comment on your site but I always read and anjoy it.

Thanks crafty green for the comment. Glad you enjoyed it.

Gestalt is a funny thing Dom I tried to see the photo your way and finally managed it. Funny how that tiered wall can look like distant flats. Thanks for correcting the spelling mistake!

Mistlethrush - the snow has gone here. As I am just about to set off to see a friend in Windermere I hope the snow hasn't hit there.

Snow is good from inside Thousand flower - but how I envy you living near the Pacific as you do. Would love to see a photograph of your island. Any chance of one appearing on your blog?

Do you have large hawks there madbush? Our biggest is the buzzard round here and he is much more adept at taking rabbits, althoughif I have young chicks I have to keep them in a run.

how very clever of you to identify all those prints! I liked the way you could make out the rat, long tail and all. We have been troubled by a rat recently although I think he has gone now of his own accord. He certainly did not eat any of the poison left by the vermin control man, choosing instead to use the bait boxes for storing bread.

It's very chilly here too, yesterday we had hail and strong winds, brrrr.

I had closed "Moody Blues" and my "Reading Corner" blogs for a week or two. Just opened them again. My main blog is "Anns Quotes and Things" but some of the blogging friends missed the other blogs, so opened them again. I also have a blog just for my 6 year old granddaughter and she likes something new EVERYDAY. So I find it very time consuming trying to post something everyday on all 4 blogs, so sometimes I just close shop for a few weeks.

Have a nice week.

What are those beautiful red flower/bushes along your front walk!!!?

I love this too, mysteries revealed to us if we just care to take a look. lovely, lovely

What a neat post! Your descriptions and imagery were fantastic - I can't wait till the first snowfall though
hope I don't fall in it. :)

I love the smell of wood smoke after a snowfall. Great post, Weaver. I could visualize each animal criss-crossing the snow.

Fabulous post as ever Weaver. Your description of all the wanderers through the farm is wonderful. I don't think I'd be able to identify them all with such accuracy.