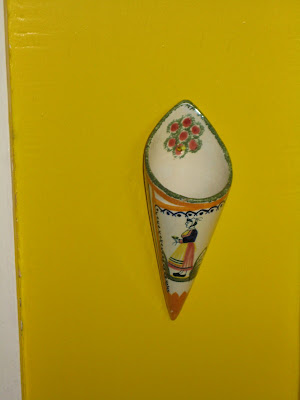 Sigmund Freud once said that collecting artefacts around us fulfilled a human need.
I think we all gather memorabilia from an early age - first it is our old toys, then presents from friends, holiday souvenirs, and so it goes on until by middle age (whenever that is) we have got shelves of the stuff.
I like this "clutter" because each piece holds a memory for me. I pick it up and think of the occasion - a paperweight fromn Malta, a bull's head from Salamanca. Each piece holds its own story.
The piece of faience in the picture holds a poignant story.

The year is 1947 and two young men in their early twenties meet at Art College and become friends. One is a frail young man, Mark, with quite severe health problems; the other, Malcolm, is a returned prisoner-of-war. He had been a "Band Boy" in the East Surrey Regiment, and had been sent to Shanghai in 1938. Taken prisoner by the Japanese shortly before his seventeenth birthday, he had spent the war on the infamous Death Railway in Thailand, suffering intermittent bouts of dysentry cholera, typhoid, pelagra, leg ulcers, beri-beri cerebral malaria and all manner of other indignities. Many times he had almost died but he had survived and at the end of hostilities was airlifted to Bangalore in India where he spent six months in hospital before being repatriated, discharged from the army on health grounds and sent home.
In the summer of 1947 these two young men decided to spend several weeks cycling round the Lincolnshire Wolds with easels and canvasses, camping out and painting.
On the first day of their holiday they came to the Lincolnshire village of Hemingby, where they found a suitable field and went to the house to ask permission to camp there. And that was how they met the two Misses Atkins, middleaged spinsters who ran a small farm with hens, ducks and a house cow. They had lived in the village all their lives.
The two men never moved on. For the duration of their holiday they camped in the field, set up their easels and painted every day, sketched, drank in the pub every evening, and had their meals provided - free of charge - by these two dear ladies. They were plied with fresh eggs, home grown vegetables, milk, butter, cream, cheese - all given to them with pleasure. For three weeks they pottered about the place, making friends with the villagers, helping with small jobs on the farm and eating very well.
Five years later, when Malcolm married, a small box arrived for him. Inside, wrapped in many sheets of newspaper was this small Victorian Hair Tidy - Quimper pottery from Brittany, dated 1896. There was a note attached, which read "Have a long and happy life."
And we did, until his death in 1991. Every time I look at this pretty little hair tidy I am reminded of those two gentle village ladies, now long dead, who kick-started a very broken and damaged young man on the road to recovery with their kindness.
Posted by The Weaver of Grass at 06:44

Weaver what a wonderful touching story you have told. Love the photo. Your poem is wonderful. As I replied to the comment you left on my Lion painting. I wish I could writie poetry like you!
Hope you are keeping warm as always
Liz

When I first saw the picture I said to myself, 'what a beautiful piece of art.' But, after reading the story, it is even more beautiful. What a wonderful story to go along with the wedding present. Memories are beautiful and isn't it wonderful that such a small thing can bring back such beautiful memories.

Please drop by and pick up your award

Lovely little wall pocket and lovely story, as well. I am a gatherer.

Thank you for sharing those special memories. I like the idea that the kindnesses shown by the Misses Atkins also touched your life. Guess we never really know how far a kindness will go.

How absolutely lovely. Thank you for sharing this story with your readers.

What a haunting and very moving story.
I really enjoyed reading it.
This is exactly what keepsakes are for to trigger our best memories.
They are only 'things' -but what they symbolise is very important indeed.

That's lovely, Weaver.
Thanks for sharing!

I am sure you have similar things on your shelves gramma ann that bring back memories.

It's good to be a gatherer Willow - makes life much more interesting.

So many of our possessions remind us of times past' elisabeth - maybe some are sad - not all of them can be happy because life is like that, wouldn't you agree?

Thanks Pat - any update on Tessa B

Just an amazing story. Such memories inside this beautiful piece of faience. Have you ever thought about writing his story as a book?

Hi Weaver, I have been absent from blogging for a while so I am a bit slow to catch up. What a lovely story, your husband Malcolm must have had a very interesting life, it is hard to imagine how difficult life must have been for him and those like him in the war, so young and vulnerable. I have read "the Railwaymen" by Eric Lomax so I have an idea about the human spirit and how people survived those terrible times.

Malcolm was a very gifted artist judging by his Venice paintings, I am so glad to hear that you had a good life together and that you have found happiness again.

What a moving and delightful story Weaver - how wonderful of you to share this.

What a poignant story,and how you must treasure that little piece of Quimper pottery.

A touching story indeed. Thanks for sharing.

Stunningly moving story Weaver and so well written. You have so many talents.