Yesterday I had difficulty getting all of my pictures on to my post - I am still not quite used to the new method of transfer that I am using on my new(ish) computer.   Most of them are quite unimportant to the text, but one I thought would make an interesting post.

Most of our fields have names and they all go back to well before the farmer's father took over in the twenties.   And most of the names are meaningless to us, although the farmer continues to use them as a means of identification when talking about a particular field.   There is 'commons', which presumably was once common land for the villager's use.   There is Peacock's, which we presume once belonged to somebody called by that name.   And there is the cow-house field.   To anyone standing looking at the field they would wonder about the name, but towards the bottom of one boundary there is a fairly high wall, which was obviously once a substantial barn.   The barn has long since gone, presumably the stone carted away to be used on other projects - so only the name remains. 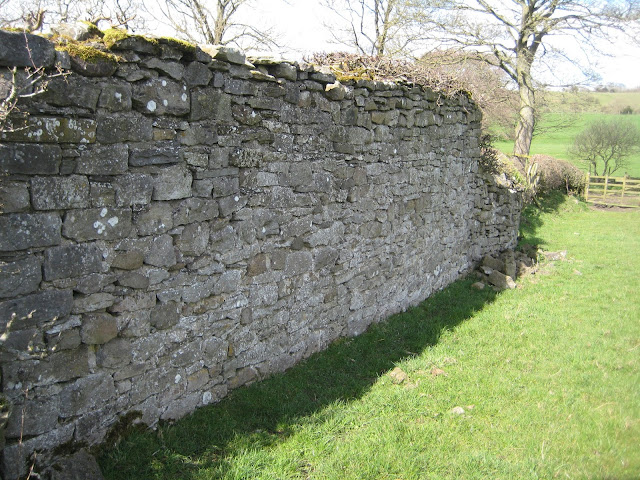 I remembered that I wrote a 'poem' about these early names so I thought I would put it on my blog again today - here it is:

Names on the map.

Cow-house field.
An acre square,
where buttercups and grass
vie to catch the eye,
and the brown hare hides
in the long grass.
Only a strip of wall remains,
half-hidden in a hawthorn hedge;
the rest carted away
to fill gaps and mend walls.

Parson's Barn.
Nothing there
but a cross roads
described by grey stone walls,
and a ribbon of cow parsley
and a thrush, singing
in the sycamore.
The stone's long gone
to cottage and to wall;
the timbers to crackle

on the Autumn bonfire.

Chapel corner.
A bus-stop where
the road bends round
towards the town;
where children stand each morning
swinging their satchels.
The tin chapel
where the congregations' hymns were
drowned out by
the rattle of rain on the roof
now rusted and fallen into
the tall nettles.

Peacock's field.
The grass cut yellow.
The cock pheasant stalks
in his finery;
the curlew's nest lies
brutally exposed.
Images of an exotic bird
fill the mind.   But
the truth is
George Peacock was a farmer.
His name lives on
on the map.                    2010

lovely poem, our paddocks and areas are stating to acquire names none intentional, it just sort of happens when we are talking about a specific area :-)

That is a beautiful poem and I find old stone walls fascinating. My husband thinks I am barmy as I have to touch them if they are hundreds of years old. We passed one in Evesham which was 1,000 years old and I thought it deserved a loving stroke for still being there.
I am hopeless at map reading but love to read the field names and roads on old country maps.

Splendid poem and such a lovely way of naming.
Yes, I was pretty sure Tess went on that walk the other day. Always cheering to see the fun dogs have looking for those elusive rabbits!
Hope the Farmer is feeling a bit better each day.

I really liked that poem, Weave. There are strange place names around here too. It took me years to find out why an area near Warminster was called 'Dead Maids'. After much speculation, it turned out that - hundreds of years ago - a tract of land belonged to two unmarried women (maybe sisters) and they both died intestate, so this is how they referred to the unclaimed land thereafter.

Now I think about it, all would have been clear if the local council had used an apostrophe when they made the road signs.

Most farms have their long-established field names. Here on the farmland at Elmley, Sheppey, there is Hone Downs, Church Downs, Newlands, Round Field, Spiders Castle, etc.

Lovely poem that exudes warmth in its words and through the ages it describes.

Our fields at home all had names. Now the current owners who still farm it the same as we did were discussing some drainage matter with me recently and produced a map of the fields and I noticed all the fields had new names. I thought It was rather nice that they had re-named them to something that meant something to them, and acknowledged that everything has moved on.

I've lived here thirty years and still don't know all the properties called by the names of owners dead long since. I did realize once that all the roads have a first name, being called after the man who had the farm there in the 19th century.

Longfellow couldn't have done better Pat, in his descriptive prose. Enjoyed it. They named the road at the east side of our land after our surname. It will stay that way after we are gone.

I love that you write poetry Pat. Makes the picture of your fields so much more vivid in my mind... Hugs! deb

Dear Weaver, I was glad to see the picture of the stone wall that remains standing, still willing to donate its stones to other needs.

Reading your poem gave me such pleasure, as your words embraced both then and now. It interests me how we humans give names to people, places and things. I wonder if other animals have their own ways of naming what they encounter, or rely on other ways to remember pathways and experiences.

Love it, you've drawn such a picture with your words that I now know your fields too.

Words, and all persists for so long

I always marvel at the skill in building dry stone walls.
Names in and around villages are fascinating. We have two 'mill lanes' though neither has any trace of a mill. Recent housing developments show what used to exist as in Orchard Park and Meadow Lane.

Your poem is very much like the wall; you built the poem by fitting words together to create a form of substance. Both are lovely.

Old field names are so evocative of times past. My blog name is taken from the name of the field outside my house, the homeslip, onto which the cows were turned after milking. Just beyond is the cricket field on which the villagers played cricket until they were gifted a new pitch on the common by the Lord of the Manor. In the 1920s. My favourite old dry stone walls are the herringbone ones you see in Cornwall.

Beautiful poem. I love the onomatopoeia of "the rattle of rain on the roof now rusted..." Greetings Maria x

Love the naming of things pastures, walls and houses.
Your poem is beautiful, I can see everything in my mind. Your use of words
much like a painters brush.

What a lovely poem.

I guess that dates it.

Never seen those field names on a Google Map. Do they do it?

Wonderful, I love the history of place names, it is fascinating!

I've always been fascinated by field names. I sold a field to a neighbour and asked them to call is xxxx's (my name) field; I wonder if they did? Many years ago I asked another neighbour if his fields had names, and he said they didn't. So I asked him how he identified where he was going to work, and he just shrugged his shoulders.

Lovely poem. Our land was called the Kitchen Field on the Tythe Map of the area. Others nearby are Castle Field (Iron Age holding there), Lime Kiln Field, the Park, and some Welsh names which elude me.

Your comments were interesting - thank you for them all.
It reminded me of a housing estate built on the edge of a town fairly near to us. It was built during the time that the Labour Party was in government here. The main road, which came out on to the road we often drove on was called 'Aneurin Bevan Way' (certainly a sign of the times). I noticed the other week that it has been changed to 'Meadowfields Drive'!