Flowers set their own time and place. 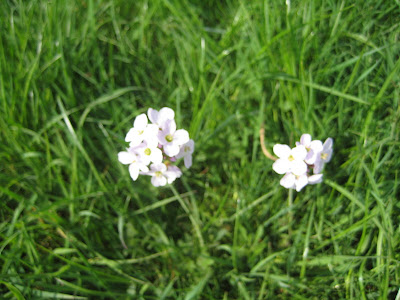 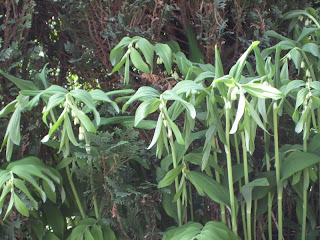 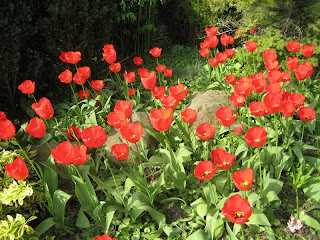 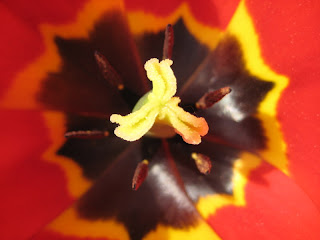 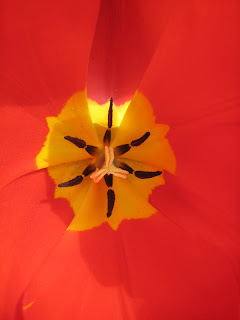 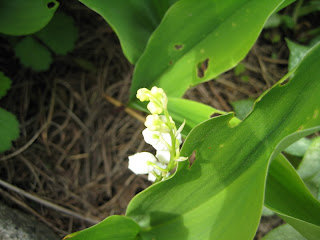 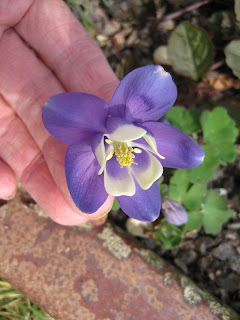 How ever carefully we plan our gardens - a bed of tulips here, a drift of forget me nots there - the flowers do their own thing. This year, because of a warm Spring, they have all decided to flower early and to flower profusely, so that the blossom is incredible.

In our garden we have a large bed of red tulips, all the same colour and until recently I assumed they were the same variety. Then the farmer told me to look inside them and I found there are two varieties growing together. And behind the tulips, in the same bed, in a dismal, dark corner is a patch of Solomon's Seal - one of my all-time favourite plants. I keep trying to persuade it to move to other parts of the garden but - no - this is where it likes to be and here it is staying.

Lily of the valley is another example of plant that knows its own mind. My sister-in-law next door threw it out of her garden because she didn't like the way it was taking over. I love it and salvaged a little clump from the compost heap. Now - always moving to the West, as I am told it does, it is colonising a large area of the garden. Some visitors suggest I pull some of it up as it is becoming like a weed. No, I shall let it wander as it will and rejoice in its pretty flower and delicate scent for the few weeks of the year.

We have a pretty Rock Aquelegia in our rock garden. Last year there was only one flower - this year a dozen. I hope that is because it is telling us it likes its situation rather than because of the weather - next year will tell.

One of my favourite wild flowers is the cuckoo-flower - or milkmaid as the farmer calls it. Its pretty mauve flowers usually come up in the paddock in mid-May. This year it is out now and is dotted all over the field - but it doesn't choose to move anywhere else.

Lovely images, Pat. Yes, it is a blessing that the cultivation of gardens has it limits. There is great pleasure in wildness and unpredictability.

I love the image of the plants in your garden moving to where they want to be. So lovely and sweet.
I adore your garden and wish I could have one like yours but where I live it is not to be !
I would love to have Lily Of The Valley taking over my garden.

I always find that the ones I want to spread don't, and then the ones I am not so keen on spring up everywhere!

In short, the flowers have got a mind of their own - and my garden illustrates that fact very succinctly!!

Beautiful photos Pat - we used to call cuckoo flower 'lady's smock'. We have one or two plants that are too rampant for a small garden and I thought I had dug them up. However, it seems to be the best treatment for encouraging growth! We think we are in control but Nature Rules OK!

Oh, Weaver, Weaver,
busy as a Beaver,
how does your garden grow?
With forget-me-nots
aquelegia in the rocks
and milkmaids all in a row!

I can't take enough photos of the beautiful colorful blooms that happen to be out this time of year in California:) I really enjoyed seeing yours! Happy Easter:)

Watch out for Marsh Mairgolds. They somehow infected my garden, I believe when I got some in a pot from a new addition from a nursery. They are all over Long Island and we can't find a way to rid ourselves of them. The only saving grace is that they are pretty, but they crowd out everything else until they fade in a month or two.

The one in your hand looks like a Columbine - the state flower of Colorado, US. We lived there for many years and my sister-in-law gave me a Christmas ornament one year - exactly like your photo. It is one of my most cherished ornaments for my tree. Crystal - very fragile. Unlike the flower that grows in the mountains.

I love the way flowers and different plants just take over. Here in our back yard we have the jungle look -- that is until my husband decides that we have to hack it back so some of the plants can breathe.

Thinking of you enjoying Easter in your beautiful country corner of England - your garden is lovely, just how I love to see the flowers, making their own way as Nature intends.

I love lily of the Valley. I like it's sweet smell. A sister of mine had it in her garden.
Happy Eastern! The video I showed was also used in a post at Christmas by me. I thought it was beautiful enough to use it again. It brought also tears into my eyes.

Love the cuckoo flower -so pretty and dainty! But lilly of the Valley was my brides bouquet -so that would still be my favorite:) Hope you had a beautiful Easter, Weaver.

(Can't remember if I told you, Artistique (from Emille) is a new blog of Jeannette (Saint Germain) -I may discontinue one of them, but haven't made up my mind yet)

My dad was always complaining of Lily of the Valley taking over - and now I come to think of it, yes, it did use to spread westward!

yes it's wonderful that flowers have a mind of their own, up here so far, it's a really good year for violets and bluebells, celandines and wood anemones, wood sorrels and cuckoo flower (one of my favourites too!)

Do take the time to read TFE's poem - did make me laugh.

I've had to rescue some lily of the valley this week after our neighbours decided to 'tidy' and cut its head off!

Thanks for the hint about it spreading west. It's currently recovering in the raised veg bed but I wasn't sure where to move it to. I'll have to do some calculating!