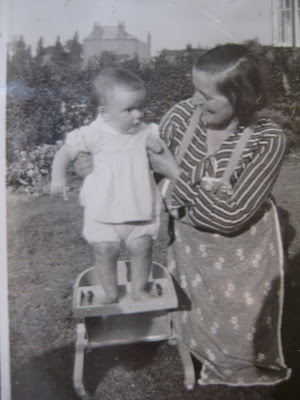 The photograph is of my mother and me and was taken in 1933 in the garden of our house in Linconshire. My mother was over forty when I was born and I was not expected - when I popped out - very premature - it was a surprise all round. But that didn't mean there was any less love and I had a very happy childhood.

Alice Maud was born in 1890 in the Fenlands of Lincolnshire. One of nine children, she had four brothers and four sisters, all of whom grew to adulthood - not always the case in those days of rampant TB.

By the age of fourteen she was in service in Lincoln, twelve miles away, where she lived with a butcher's family. She used to speak of scrubbing the slaughter house floors on her hands and knees in the middle of Winter and of carrying hot bottles upstairs to her 'mistress' who was staying in bed because of her period pains when she, my mother, had similar pains. Later on, when I was myself a married woman, she would get really cross if I knelt down on the floor for any reason - telling me I would end up with arthritic knees like her (she was right!)

At nineteen she became pregnant with my sister and went back home for the birth. She married six months after my sister was born, when my father was 21 and able to go against his family's wishes. Quite a disgrace in those days, she fought all her life to keep the information secret. We all knew but never liked to mention that we knew so she went to her grave thinking she had kept it from us - such a shame as we were all so open about it between ourselves and would like her to have known that it meant nothing at all to us. And when their Golden Wedding day came round they couldn't celebrate it because that would have meant they would have exposed the secret.

She had five children altogether but lost two to pneumonia - another killer in those days. But she gave the three of us - well spaced with eleven years between each - her unconditional love - as did my Dad.

In her final years she was ridddled with osteo-arthritis and could barely walk but she never lost her cheerfulness and her ability to sort things out for us all. She kept an old teapot behind the settee in the living room and it was always full of money she had saved. If there was ever a mini crisis of shortage of funds then she would say "go and look in the teapot!"

A brilliant, loving, caring Mum and today - on Mother's day - I salute her memory - with love.
Posted by The Weaver of Grass at 00:38

A lovely tribute Pat. I always find it a bit emotional on Mother's Day - I miss my mum so much. We are going out for Sunday lunch with Jon's mum.

What a lovely story, well I suppose it is real and not a story, but still wonderful and heavens I dont think I thought you were that old!
Mothers day here is in May, dont quite know why, surely the church calender is the same every where, but the first Sunday in May is mothers day here.

A great way to salute your Mum's memory...And I wonder how premature you were? I was a seven month baby too, weighing in at 4lb 2oz. Guess we were both made tough?!

A very beautiful post, brought tears to my eyes - I am making sure my mother knows she is the best there is on this, her day.

Oh Pat - what a lovely post full of memories, some happy and others more poignant. Your Mother must have been a wonderful woman. I recognised you in the photo by your lovely dark eyes. This is the first Mothering Sunday without my Mum and I know how lucky I have been to have had her for so much of my life. She died one year ago yesterday aged 102.

Lovely to read. Not Mother's Day here in the US till May. I'm trying to avoid it this year!
x

My mother died six years ago. I find all the advertising about Mother's Day in the shops quite difficult to deal with because I haven't got a mum now. We used to pick primroses on Mother's Day, now it is all hyped up and commercialised which just makes it worse for me. I enjoyed reading about your mum.

hello weaver, i wish you and all mothers back home a lovely mothering sunday!!! steven

absolutely lovely memories Pat. I miss having to buy mum a card, of all silly things! and sending or taking her some flowers! Well I'm on my way now to my son's and he and Alan have done all of the work for Tina and myself. Wonderful. Just miss my daughter down south.

WONDERFUL. A great story of life and love.

That was so nice to read! Your mum lives long and loved in memory.

A loving tribute to your Mum, Pat. I can remember Mothering Sunday in the church when I was very young, when we were still C of E, but now here in Canada we celebrate Mother's Day on the 2nd Sunday in May. I, too, have to honour my mother with dear remembrances, - she died at the age of 56 when I was 33, so I have been a long time without her but her memory has always been an inspiration to me.

I salute her too Weaver. I know it's an old saying, but I sometimes think there are younger generations (and I'm including myself here) who 'don't know they're born'.

My mother was five months pregnant on her wedding day, and I never realised (nor was it spoken off) until she did a 'Grandparent's Book' for my youngest two, and the 'wedding' page immediately preceded the 'children' page. I looked the dates. Oh, I'd give my father what for now if he was still around! The lectures! And he was very harsh to one of my brothers, who married a woman who already had a child. They're still very happily married and have five grandchildren - including twins!

And for a premature baby you've got a chubby old set of knees there! Great photograph.

Such a loving remembrance of your mother who sounds loving and all round super.
Wouldn't it have been awful to have a cold or distant mother?
Mum was so warm and lovely.
Years ago she said that her mother, Granny ,-- long since dead -- had said to her when quite middle-aged: "I miss my mother more and more."
Sounds as if we all do......

I salute her as a mother who kept a child she might have had taken for adoption.I have two mothers to grieve and it's a hard day surrounded by loss but made joyous by my own daughter.


and we join you-

What a wonderful thing to have a caring mother! My parents had a similar secret to your mother's and we never did find out until after she died. I think the thing I learned from my mother was that I needed to be a good, kind, caring and loving mother to my two sons. I have tried my best.

What a fascinating post. Several remarks resonated with me, including the one about pneumonia. When I was five I had "double pneumonia and pleurisy". The doctors told my parents that I probably would not see six.

a lovely tribute to your Mum and the photo is wonderful!

Thank you so much - lovely to hear your own "mum" stories - seems mums are important to us all.

A wonderful tribute to your courageous and loving mother. I think she must be smiling.

A lovely tribute to your mum! We really don't realise how easy some parts of life are for us today; though, in other ways, I think the pressures are worse now. Your mum sounds like a strong and loving woman.

Such a lovely story to share! Imagine going through what she did while still just a child and then the shame she must have felt in a time when unwed mothers were shunned and judged. To carry that through her life as she did - probably casting shadows on many otherwise perfectly happy occasions. Hope she is enjoying her Mother's days from her lofty home.