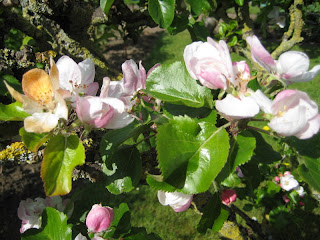 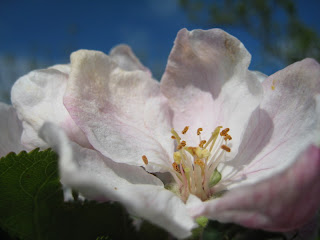 You have to be a certain age to realise the significance of the title to today's Royal Wedding - I think the song dates back to the Second World War!

Whether or not you are a republican or a royalist, you have to admit that as a country we do this sort of thing very well indeed. The precision was immaculate - down to the second,let alone the minute - the pump and splendour were as good as ever and the British Fashion Industry must have made millions out of it. Of course I am sure that some little things went slightly wrong, but if they did we didn't notice them. A professional musician once told me (when I was playing in an amateur group) that the difference between an amateur and a professional performer was that if an amateur went wrong the whole thing went to pieces, whereas if a professional went wrong the rest of the group would behave in such a way that nobody would notice anything amiss. I suspect the same was true of today.

I watched it all morning, kept warm by Tess on my knee. Yes, I admit, I cried in one or two places. I loved "the dress" and those of the bridesmaids; the simplicity of the wedding bouquet; the patent sincerity of the young couple. What was there to dislike about any of it, regardless of one's political views?

Speaking of apple blossom - I took this photograph in our vegetable garden yesterday. If you should have a similar tree in your garden then do keep an eye out right on the end of the leafy branches because that is where the goldfinches love to build their nests once the leaves are out. For the last couple of years we have had a nest in just such a place.
Posted by The Weaver of Grass at 05:54

Gorgeous closeup of that blossom. In a few months it'll be the perfect apple. I just love blossom time each year. The only better time is when they're ready to make pie!

Once again you have voiced my own thoughts exactly Pat. I have thoroughly enjoyed the coverage of the Royal Wedding this morning - it has made up for all the inane talk of the previous few weeks. Apple blossom is so beautiful - our little crab apple has just lost it's flowers and I can see the tiny fruits beginning to form.

By far the best part for me was the sight of trees in Westminster Abbey. Kate's bouquet was a very close second.

How fabulous that you have an Apple Tree in your yard. The blooms are lovely.

Well said Pat! The Royal Wedding was terrific. Loved seeing everyone getting into the spirit of the occasion. I joined with the singing and got to bed at 5:30 am Pacific Daylight Time!

You're so right Pat, no-one does pomp, ceremony and wonderful pagentry quite like the British. Makes me very proud and I watched every minute of it.

Spoke this afternoon to a friend in the USA - like Jo she got up at 2.30am to watch it live as I suspect did many all over the world.

My apple blossom is out, but I doubt we'll have goldfinches. Although I see the odd greenfinch and occasionally a chaffinch, we are a bit too far into the city to attract goldfinches.

I'll look forward to hearing about any which come your way though :)

I do agree Weaver. Whatever one`s politics, the Royal Wedding was beautifully done and they do seem a genuinely nice couple who are together for all the right reasons.

We have young fruit on the pear trees and the crab apples shed the last of their blossoms during a night of rain.

I'm neither a full-blown Royalist, nor an out-and-out Republican, but,yes, I agree: it was excellently well done.

I watched it dry-eyed and objective until that extraordinary piece of polyphony 'Ubi Caritas' by Paul Mealor, which blew me away.

Oh Pat, no, you aren't the only one to remember that song. It was 'our song' - Charles' and mine, and sure enough, he arrived home from England and we were married in Apple Blossom Time, - May 12th 1945. I looked at the date today and wondered where the years have gone, - it will be our 66th anniversary, and here the apple blossoms will still be out, as beautiful as ever.