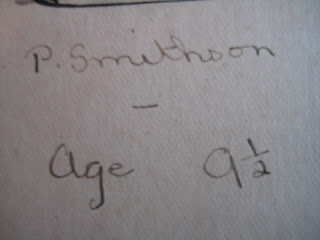 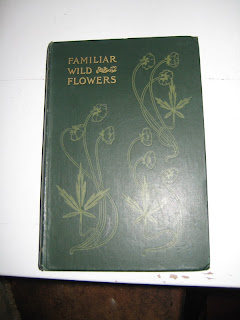 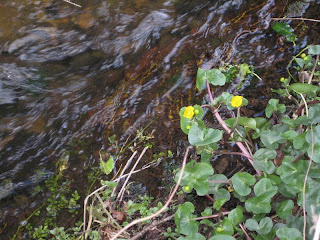 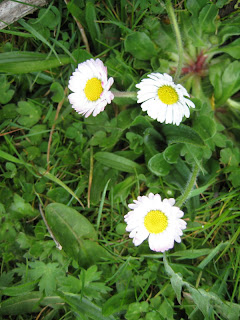 If you give a book as a present, do you write inside it before you give it to the recipient? Some people don't like this practice, feeling that it is defacing the book. I love to do it though. There is something so heart-warming about opening a book one has been given years ago and finding out where it came from, who sent it to you, what memories it holds.

As you will know if you follow my blog, I have been checking the marsh marigold patch in the beck for the last week, watching the buds get fatter and fatter. Yesterday they had finally burst open - now Spring is really here. They are by far my favourite wild flower. Being brought up almost on a river bank, where marsh marigolds flourished, they remind me of my childhood, of picking them and carrying them home to put in a jam jar - we called them kingcups or waterblobs.

Then I turned to the front page of the book - I have two volumes of this book and they are old. They had once belonged to someone rather grandly called Howsley Rockley - his name is inscribed in the front of each. I remember buying them from a second hand bookshop with some of my pocket money. When did I buy them - well I would guess it was early in 1943 because there it is, large as life on the front inside cover in my childish handwriting - P Smithson age nine and a half. I was instantly back in that second hand bookshop, which I don't think I have thought of between then and now.

So if you don't like writing in books - do have a think about it and reconsider. In the distant future somebody might get such pleasure from seeing what you have written.
Posted by The Weaver of Grass at 10:47

I love to come across an old book with a personal inscription - perhaps with a date too - and then wonder about who wrote the message and who received the book. To write an inscription in a book myself I have to feel confident that the recipient would like it.

I still have poetry books given to me as a child with lots of little bits of writing here and there. It brings back memories of what I felt at the time.
Keep it up!

How interesting today is... I just signed and dated one of my photography books that I was sending to a friend this morning and here is your post today about signing books.

I treasure my copy of 'Mein Kampf' which the author signed all those years ago.

I always inscribe and like others to when giving me a book as a present.

The name Howsley Rockley must be revived! I strongly recommend that you write a series of poems under that name, Pat.

What a pleasing jolt you must have got from your re-encounter with P. Smithson, who so precisely stated her age!

Inscribed books are treasures. There's nothing much better than reading them, "in my book"!!

Have you googled the name Howsley Rockley? There surely can't be (or couldn't have been)too many people with that grand name!

I love books with a name and date, or better yet an inscription, on the inside cover—or on the first-free endpapers or flyleaf, for that matter. A copy signed by the author to someone is wonderful, of course…but just the signature of a gift giver, or even the book's former owner is better, in my way of thinking, than an unmarked copy. Somehow, those names and dates give a sense of both care and history to that particular copy of the book.

Better than nothing is a signed bookplate.

I always sign and date books I give as gifts, and hope anyone who gives me a book will do the same.

Along the same line as preferring a book with a bit of inscription over a "clean" copy, I'd usually rather have a an older edition to a more recent one, and a used copy to a new one.

I love to find poetic inscriptions in vintage books.

There's no doubt in my mind that a book that's been inscribed is even more of a treasure than one that is pristine. I love to think of myself at a young age receiving the book as a gift - or finding one of my parents' books and seeing a long ago date inscribed. It adds to the experience for me.

hello weaver, when you were a younger girl did you imagine yourself walking home with a man and "discussing whether the marsh marigold belonged to the buttercup family or not". you are so very deservedly blessed! steven

I love books that have some sort of inscription within the first pages, either an author's words or that of a friend.

Taking this a bit deeper, I particularly love inscriptions that were written with a fountain pen. Yes, I am an old-fashioned book lover.

I saw some tiny daisies, just like the one in your photo, over in Central Park the afternoon. Finally, winter is releasing its grip on our city.

may I born in the place where you mam great flowers. great blog .

I do love to see an inscription inside a book. It brings back so many memories to open up the cover and see it there.

When I give a book, I need to be certain both that the recipient will enjoy it and that they do not already own a copy, before I feel comfortable inscribing it.

I get most of my few books from the recycling centre, a limited but interesting selection. They often have things written in them and I love that, the words scrawled on the flyleaf are often better than the printed pages!

The latest 'We need to talk about Kevin' has a phone number and I'm itching to ring it to ask what they thought of the book!!

I also love writing in books, I feel that it makes it more personal, and for the same reason I love when people pen a quick note in a book to me (although aside from that I am so protective of keeping my books pristine haha)