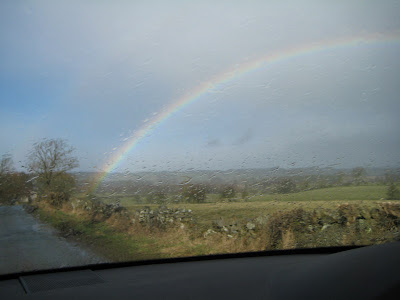 March is certainly living up to its name today. One minute the sun is blazing down and the temperature (courtesy of our new car dashboard) is ten degrees, the next minute it is pouring with rain and the temperature has dropped to two degrees. And all of this is accompanied by a seventy mile an hour gale. The flip side, of course, it that the day produces magnificent rainbows. On our way to the Physiotherapist I took a lot of rainbow shots - this is the best and not very good at that.One of them appeared to come down just over the wall at the side of the road - so near that the farmer threatened to stop the car and jump over the wall to search for the pot of gold. (envy because I won a £25 premium bond prize this morning!)

On our way back from a going over by the Physio there was a massive traffic hold up which turned out to be a tree blown down across the main road. Thankfully it had not fallen on a vehicle - it must have come down in the hour since we had passed that way before in the opposite direction - such is the capriciousness of life and death I suppose.

And speaking of capriciousness I suppose you could apply the word to peoples' ability to read carefully or not. Reading was my field of research in my working days and I did hours of research into why some people read carefully and others just let their eyes float over the words. Yesterday there was a letter in the Times complaining that the Census form envelope would not fit properly into the Post Box when the writer tried to return his Census form.

"That's odd!" I thought, "I didn't know we had to return it straight away." And of course upon reading the form it clearly states "Please complete your Census Questionnaire on 27 March 2011" - I just wonder how many people have already returned the form. To be fair to them it does say higher up on the same page "ACT NOW" - one wonders what kind of people put these forms together. Having a cursory glance through the questions (it is not March 27 yet!) it seems to me one might need a degree in reading skills in order to fill it in correctly.

The wind seems to have dropped slightly since we came back. But March is reputed to be windy. As children we always recited:
March winds bring
April showers, bring
sweet May flowers. Let's hope it is right. Lots of daffodils in bud - and say my first lambs today.
Posted by The Weaver of Grass at 07:37

Not a bloom or a petal over this way. March is a harsh month, this year.
Canada is doing away with the long-form census. One wonders what future generations will make of this short-sighted move.

I love the drama of March. (Gorgeous rainbow shot.)

I think your rainbow shot is great. We don't get too many here because it doesn't rain much in Phoenix so it always seem so magical when they appear. I am one of those people whose eyes just float over the page but my husband is the opposite. He takes so much longer to read something but he remembers it much better than I.

Did you know that if you see a double rainbow, the colours are reversed?
Next door's tree has hints of cherry blossom and driving home at 7am, it was practically bright. Yes, Spring is on the way...

What a great capture on the rainbow!

it's been the same here today, all four seasons in one day, i didn't see a rainblw though,

Will you spend you winnings on a book, some threads or perhaps lunch at your favourite pub? The rainbow is beautiful - we drove right through one once and the children thought it was magical. I am guilty of reading too quickly - I hope we haven't forgotten about the Census form on the 27th!

Lovely shot Weaver! I must confess to skim reading things that I don't consider very important...

And yes, what weather today! We had the gales, brilliant sunshine and then dark squalls of hail. Lots of hail! Then the cycle started all over again.

Yes, March can be capricious, Pat. That's why we are given rainbows. Beautiful shot. Indeed, there are no bad photos of rainbows.

Much the same here today. Blowing rain and cold, with rolling black clouds that suddenly part to reveal an azure sky. Most confusing, but wonderfully dramatic. Such is March, I'm afraid.

Yes - what is the weather like eh pat? The wind has dropped today but we wont be out much as we are still beavering away here in the kitchen!

No lamb photo forthcoming yet - maybe that is a good thing as the weather is so cold - the farmers up here tend to lamb quite late.

Thanks for your comments.

Thanks for the romp around your farm. We still have mounds and mounds of snow and ice. Good to get outside a bit - if virtually.