Able to farm at last. 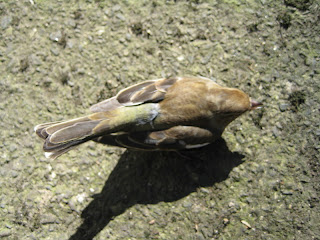 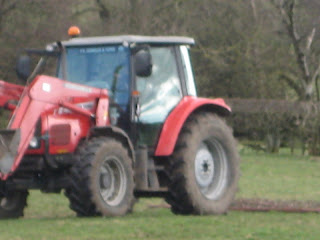 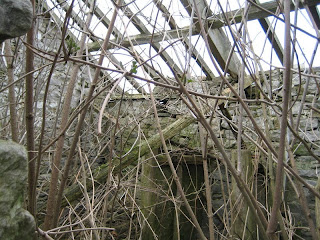 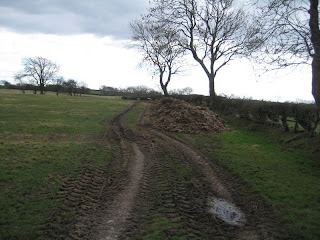 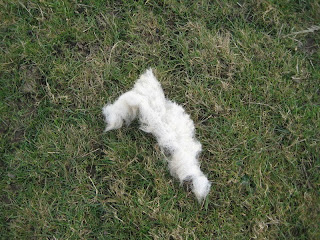 Half way through the morning a little bird hit the kitchen window with such force that I expected to find it dead on the path but no, it was badly winded, its beak open and laying quite still. I left it there - the farm cats didn't seem to be about and I didn't want to scare the poor thing rigid by picking it up. Half an hour later it had gone, so I hope it recovered and flew off.

At last the land is dry enough to begin the Spring's work. These operations have taken place every Spring for hundreds of years - all grassland farms go through the same process and it is this continuity that appeals to me. First of all the land is harrowed. In my father-in-law's day the harrows would be heavy cast iron ones pulled by work horses; now they are much lighter harrows and in the few years before he died he would complain bitterly that the new harrows were not doing the land any good.

Then the land is fertilised. In the old days all manner of things was spread - bone meal, basic slag - by now the farmer uses a chemical fertiliser which he mysteriously calls 20:10:10. This is spread on all the grass fields and then they are rolled with a heavy roller.

Our Winter manure is already lying in a heap in the field rotting down nicely. Once the grass begins to green up, then the farmer will hire a huge mechanical "muck spreader" for the day and, working from early morning until dark he will - hopefully - manage to get the whole of the farm spread in one day.

Then it is up to Nature to take its course.

On our walk to photograph the farmer we passed one of our old field barns which is rapidly falling into disrepair. I held the camera through a hole in the door and took this photograph. There is something so sad about these barns as they all lose their stone slabs off the roofs and then begin to fall down. In the old days, when they were used to house cattle in the Winter, they were such an important resource on the farm - now they are totally redundant.

We did once try to have planning permission to convert one of these little barns into a retirement home for the farmer and me, but we were turned down and now that barn too is beginning to fall down.

Incidentally, walking round the fields today, I see they are littered with bits of soft fleece which are falling off the sheep. It almost makes me wish I could spin as it all looks so beautiful - if I knew anyone who did spin I would gather it up for them.
Posted by The Weaver of Grass at 08:13

One of my neighbours could spin!
Your husbands works very hard! I never realised that a farmer can hardly go on holiday. How does he do that, if he goes away for a couple of weeks?
Yesterday I met Kay D., one of the Canadian bloggers. We had arranged to meet near the windmills, so we did! It was great, and the weather was sunny and warm enough to have a coffee outside the souvenir shop. Her husband wanted to see more of the mills and Kay and I talked about all kind of subjects and our mutual friends on the blog. It was really wonderful.

We often have birds flying into our windows and I always expect them to have been killed. It's amazing how tough they are. Your husband must be so glad to be able to get out and start work on the fields. Such a waste that you were denied planning permission to convert that barn - it would look so much nicer as a cared-for dwelling.

What sad news that you couldn't convert the barn. In one of my dream lives... I would convert a barn have a huge work area with a smaller living space.

It seems that the Barns were made so well and to my eyes beautiful, that when the barns do crumble it is very sad.

The photo you took of the barn was wonderful !

Sarah spins pat and I know she packed her spinning wheel!

Nice newsy post Weaver - it is a true sign of spring when you hear the machinery on all the surrounding farms starting up.

And also when the spinners get their newly shorn wool... I spin, although not as much as I once did. A lovely relaxing activity.

Weaver, I don't have a blog...Just a lover of reading. Your's is always interesting and fun to follow! Jo (Smiling Heart) is a great friend of mine. Thanks!

Sad that you couldn`t get permission to use the barn. Don`t they try to encourage the preservation of stone barns in the Dales?

This is a lovely time of year. It must be satisfying for the Farmer to see the grass in good heart for another season.

Muck-spreading well underway up here! All windows at the back of the house firmly shut for a good few days.

Oh how busy you and the farmer are! I know the warmer days mean hard work, but I envy you the fresh air of the country and the beauty of another English Springtime.

I can spin, but haven't touched my wheel in over a year now as we have been so busy getting the house ready to sell (hah - complete waste of time in THIS market!) It's very therapeutic.

Your husband must be glad he can get on the land again and start tidying up after the winter. We have a working dairy farm the other side of our garden wall, so we know the annual routines.

You'd think with the pressures on farmers these days that your local council would let you convert a barn to a cottage - as a holiday let!

I love the lanolin smell of sheep wool.