Images from Japan and the peace of the countryside. 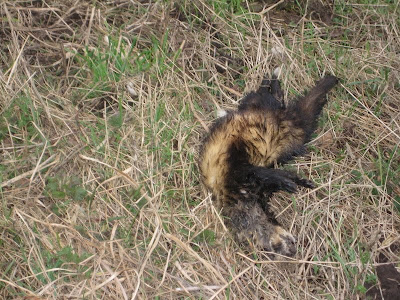 Images of that tsunami sweeping everything in front of it, and of the great cracks in the roads, and the terror of the people, and thinking about the huge loss of life and of people who have survived but have lost loved ones or don't know where they are - this is the stuff of nightmares and all we can do is offer them our thoughts and prayers.

Here on the farm it all seems so far away and Spring marches on as though nothing had happened - I suppose this is the cruelty of Nature. When one loses a loved one it is hard to bear that everyone and everything goes on as normal and one wants to shout out - but it isn't normal - this or that has happened. And the same goes for the earthquake. It is headline news for a couple of days - while it is sensational - and then it fades into obscurity. When did we last see or hear anything in the media about last week's New Zealand earthquake?

Death is stalking our fields this weekend. Out on the lane, just over the fence from our top fields, there is a dead animal. A friend saw it and thought it was a polecat; the farmer had already seen it and he thought it was a ferret. Whatever it is it seems to have died naturally as there is not a mark on it and its fur is very beautiful. I have taken the long distance shot above in case anyone out there feels like trying a bit of identification.

Only yesterday I posted a photograph of the field where our neighbour had heard a dog fox barking. I have to tell you that he went down there very early this morning and lay in wait and at 6.30am he shot a dog fox. Half of me is very saddened by this - they are such beautiful animals - but the other half knows that this field is only one field away from where my hens and my new cockerel are happily pecking around. Foxes don't discriminate - they view all hens as food and are not averse to killing and beheading the lot even if they don't feel like eating hen at the time. Also, I suppose a good, clean death is better than being chased to death by the Hunt. Mixed feelings though.

Meanwhile, my cockerel scratches on happily. A friend called and I asked him if he had seen my new cockerel in the field. He replied, "Do you mean that great big ginger thing?" I prefer to think of him as a Golden Buff Orpington - but what's in a name? A rose by any other name smells just as sweet, to misquote the Bard.

Have a nice weekend.
Posted by The Weaver of Grass at 08:20

I know it must be difficult if you keep hens but I still think it's a shame that there isn't room to share the countryside with the fox. :(

On the other hand... Since you're a poultry expert, maybe you can help me identify my latest 'work of art'.

It does seem strange that such destruction can be happening in Japan and yet we are able to get up in the morning and spring is right outside our door.
Plus when you have family there it is even harder. I keep checking twitter and the news.

I feel quite sad about the fox. I understand wanting to keep the chickens safe, as I have to keep my "square ones" safe from the coyotes and javelinas, but when all foxes are gone what will keep the other animals in check ?
It is indeed a tough question.

I don't think as Angry Parsnip that it's strange for it's a fact that Japan sits on probably the most unstable piece of the Ring of Fire and Yorkshire sits on a big clump of granite in the North Sea and I know exactly what you mean AP and you are right. Is it a coincidence that the head of the IAEA is a Japanese and that Japan has nearly 50 atomic reactors some situated on the doorstep of a 13,000,000 city - this is madness in the extreme! There are a lot of strange things in the world - indeed there are. We must look beneath the covers and behind curtains a bit more than we do. We in doing so we must be rather more than foxy.

Terrible incident, really. But these things happen. You know, sometimes I get paranoid and wonder when life will come around to me and bite me in the butt.... when it's my turn to, for lack of better word, be screwed..... I mean, I have had many unfortunate events but much less than many people in this world. I continue to brace myself while awaiting THE catastrophe, the BIG one.

The happenings in Japan are too horrific to comprehend - we are so lucky not to have to worry about such dreadful occurrences here. I can understand your mixed feelings about the fox. I can't help with identifying the ferret/polecat having never seen either, other than on TV or in books, but I expect the farmer is correct.

It's tough coming to terms with what is happening both around the world and in our backyard.
Our cat has caught (and eaten) 3 red squirrels in the past month.
He expends more energy stalking it...

I have to say that I think your hens would be safe if you kept them in fox-proof enclosures, Weaver. You need to bury the fences, and not many people can be bothered to do that, let alone lock up the fowl overnight. A fox will only kill all the hens if it gets in to an enclosure - it is genetically programmed to go for all flapping birds until the last one is dead. That is just it's nature, and chickens - like pheasant - will roost in trees, given the opportunity. Don't blame, and don't shoot the fox!

Survival of the fittest, Weaver. I can't identify this animal but I know death when i see it. We live in troubling times, or so it seems at the moment from afar. Thanks, Pat.

Oh yes I understand all about Japan and the Ring Of Fire, I lived next to the ocean in Laguna Beach, California for much of my life, which is part of The Ring Of Fire. My children grew up with earthquakes and a reactor just down the road.

Much of my family lives in Southern Japan so I have one foot in Arizona and one foot in Japan.

Not everyone can live on a big hunk of granite in the North Sea as you said, What should Japan do burn oil like the US and be a slave to OPEC ? Not saying that nuclear power is the right answer but I don't have enough info to make a informed comment.

What I was saying in my comment, was it was a lovely spring day in Tucson and where my family lives in Japan there was a grim morning to wake up to.

Reactors aside the earthquake alone was devastating in Japan.

I apologize to Pat and anyone else who read my comment and was offended. I adore Pats Blog

It is alsmost surreal my life, the sun here in the UK and the devisation and fury of nature in East Asia

Buff Orpingtons have always been my favorite chickens.

thankyou Weaver for your thoughts on the tragedy in Japan.
Yes life goes on and that perhaps is the beauty of it. To take the everyday with the trauma and still have hope for the future.
Sorry about the fox...but at least the hens will survive.

I too have a love/ hate relationship with predators
but once a fox fells confident with your girls....he will never leave eh?

the scenes from Japan are terrible.....I think that originally we all thought it was more a loss of hopes and possessions rather than of a loss of life

how wrong we all were

It's always sad when an animal dies. We've lost nearly a dozen trees to a beaver, so we coated our trees in pepper sauce, wrapped them in chicken wire and then heard that a neighbor had shot a beaver. We were very upset, we can co-exist if we take the time, the neighbor wasn't willing to make the investment.

Thanks for the comment - as I said I do have very mixed feelings about foxes but I would indeed be devastated if my hens were taken.

I won't comment on Japan, except to feel deeply for the loss of so many souls and the devastation of their homes.

One fox dieing or being shot just opens up the territory for more foxes . . .

We used to have terrible trouble with polecats here when we had poultry. But ferrets and polecats BOTH have a sweet tooth for chickens and can get through the tiniest hole in any coop . . .

Would you believe that the word verification is DEFRA!!!

Hard to tell from your photo what size the dead animal is. If quite large then I suspect it is a polecat. We saw a dead one beside the road in Coverdale in the autumn, so they are definitely in the area.
Foxes kill not only for food but also for fun; one killed all our Khaki Campbell ducks creating carnage. I would feel differently if they killed only from need.