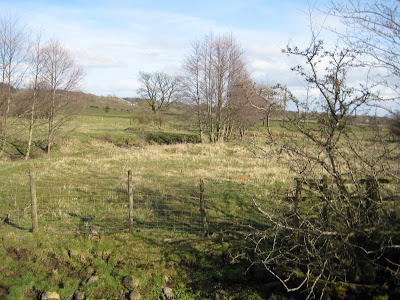 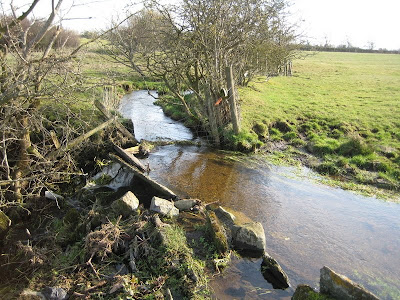 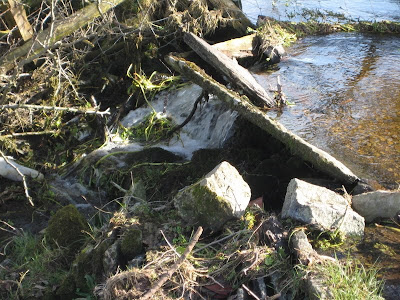 I thought you would like another walk around the fields as I haven't posted one lately. It is a sunny but very cold and blustery day so I wrapped up well. Tess, of course, needs no wrapping up at all in spite of being recently cut - she just doesn't seem to notice anything but rabbits.

The weather forecast here is for a wet and windy weekend, but for Scotland, not so very far away, heavy snowfalls and a little dusting on the tops on the Pennines, so we might see Pennhill iced from our kitchen window in the morning.

There was little change in the countryside as we walked round. Dry days meant the land dried a little, then wet days made it wet again. None of the bushes and hedges are anywhere near in leaf. The beck is quite full of water and our little waterfall is flowing nicely. The field beyond the waterfall does not belong to us and is - in the farmer's view - rather neglected. I rather like it because it does mean that there is often more wildlife in it. Last week our neighbouring farmer heard two foxes barking late at night - one in his field and the other in the field in the photograph. Wish I had heard them - although I don't want Mr Fox anywhere near my hens, or my Buff Orpington cockerel, who has settled in very well by the way.

I shall not complain about the weather - anything is better than the terrible earthquake and tsunami in Japan. We must all hope that the tsunami is not high enough to engulf those Pacific Islands which lie low in the water - it doesn't bear thinking about. Nature can be so cruel at times. At least Japan, like New Zealand a few weeks ago, is a rich country and can summon aid to help its citizens - unlike places like Haiti and Pakistan, where thousands are still suffering the effects of nature doing its worst.
Posted by The Weaver of Grass at 06:37

My heart is in Japan today, praying for them. There is a tsunami watch for the pacific northwest here in the US where my daughter lives so I'm a little worried about that but I think it might just be the news stirring things up, at least I hope so. Lots of praying today.

We have a family friend in Japan - she is OK, but she felt the tremor.

The scenes on Breakfast TV horrified me. I can't imagine what it must be like to be part of a disaster of that magnitude. Your walk was bracing and most enjoyable - thankyou.

Yes the tsunami is such an unbelievable catastrophe that we cannot realise how bad it is.

It is horrifying to see the devastation and to hear of the ramifications of the quake and the resulting tsunamis. My son lives in Vancouver so of course I had to let him know. The news here said when it reaches the west coast the waves will be high enough to know a man over but it doesn't sound as though we can expect significant damage. My heart and prayers go out to those affected by this. God Bless.

Rich country or not it didn't look too good for the people swallowed up in it.

thankyou weaver for the peaceful vision of the little part of the world you inhabit. steven

We're still waiting to hear from our friends in the Marianas and Micronesia. This is where my husband was a month ago and goes there several times a year.

Somehow your picture on top holds the flavour of the Tsunami...

Prayers and thoughts for the afflicted in Japan.

Lovely pictures from where you live. I think double strength prayers or thoughts will be in order this weekend.
X

Thank you for the comments - our collective thoughts and prayers can't do much good but maybe it helps us to come to terms with it all.