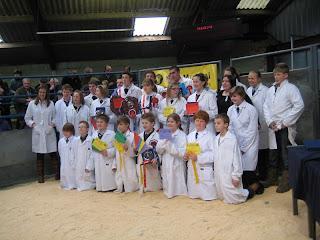 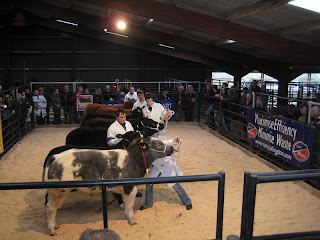 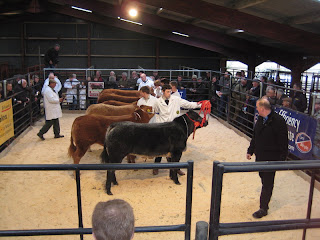 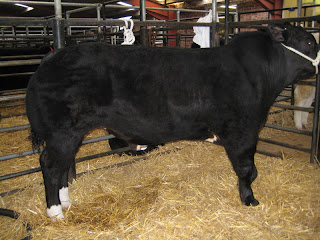 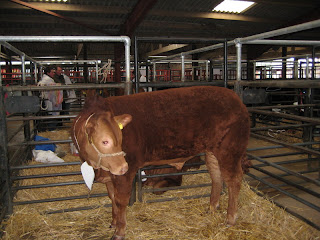 On Saturday there was an important Cattle Sale at our local Auction Mart. The Mart is the place where all the local farmers meet every week to discuss farming (and gossip!), to keep their eye on prices, to weigh up when to sell stock and to generally socialise.
Most of the cattle came to the Mart on the Friday evening after Friday's sales were over. This meant that they could be shampooed and spend the night in clean fresh straw so that they were in pristine condition for the Sales Ring.
Women do go to the Mart if they have stock to sell but on the whole they keep away as it is really "not done." So I persuaded the farmer to take my camera and take some photographs for us to see. There was a championship prize and then the cattle were sold - the prices were 'very good' according to the farmer.
The proceedings began with a presentation of certificates to Young Farmers and some Young Farmers' Handling Classes - in farming you have to catch them young and then keep hold of them or they drift away!
Posted by The Weaver of Grass at 08:49

Adore the photo of the Young Farmers.
They are so darling.

Farmer took some wonderful photos of some very handsome cattle.

How interesting. There seem to be girls in the young farmers photo, do they just drift away as they get older? Was surprised to read women not attending because "it isn't done". The youngsters look so cute and proud, nice to see.

Thanks, Pat, for this little insight into the world of livestock and auctions. I hope that you are doing well and that spring has begun to grace your garden.

It's heartening that there are youngsters wanting to go into farming when times are so difficult. The cattle look superb.

There's some nice looking beef there!

I found myself muttering words such as "precious" and
"adorable" as I looked at these wonderful creatures. No wonder women aren't allowed! We'd want them all for pets!! And rightly so!

That's right - capture their attention and passion while they're young and you'll have another generation of farmers.

Oh, that takes me back Weaver. We were allowed to take days off school to go to market with Dad! Ashford, Maidstone, Rye and sometimes Bury for us.

Some very handsome animals there. Does discrimination still exist amongst farmers then? I was surprised to read that it was not done for women to attend the sales.

Thank you for the comments. I found them so interesting that I have done another blog on them!