The Egg of a Seabird..lovely, perfect and laid this very morning. 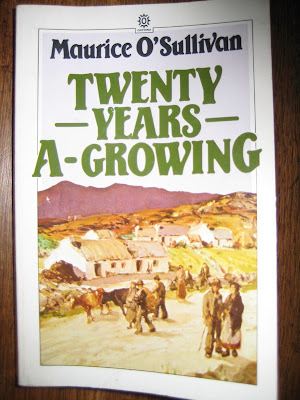 So says EM Forster in the foreword to a delightful book I am reading.

The Blasket Islands lie off the Atlantic coast of Ireland, a short ferry ride from The Dingle Peninsula. They have been uninhabited since 1953 when the last few residents left for the mainland and better health care.

Maurice O'Sullivan was born in 1904 and he wrote this book as a series of stories for his children to read when they were older. The original is written in the Irish language. But the book has such universal appeal - it tells the story of his childhood and adolescence on these islands, the story of a way of life that has gone for ever.

It was a way of life which was very harsh. The diet was poor and was heavily supplemented with puffins, seagulls eggs - anything they could scavenge from the wild. Often they were shoeless and often they were penniless, but the enjoyment of life, the mischief they got up to, the cameraderie of the villagers - it all shines through in this absolutely delightful book.

A friend has lent it to me to read. She had a copy many years ago and lent it to someone and lost it. Last week, in Barter Books in Alnwick, she says it jumped out of the shelf and into her hands as she went through the door. I am so glad it did because I have loved it. Do try to find a copy.
Posted by The Weaver of Grass at 07:30

Although life in that era was hard for lots of people and many mainland dwellers may never have left their small village during their lifetime, it's hard to imagine just what life would be like on a small island. Glad you're enjoying the read, Weaver.

My Nana was born in Waterford, Irealnd in 1916 and raised there. Life was difficult for them as well but not like the island. I loved her stories of youth so I think this book would be a particularly fun read for me. Going on my list.

It sounds a magical book Pat. That way of life is almost unimaginable today. Harsh maybe, but I can see it's appeal. I will look out for it.

This sounds like the perfect gift for my sister-in-law, I must look out for it, and as it will be second hand I will be able to read it before I send it to her: more than perfect!

This book was on the radio when we first married, we loved it so much we found a copy. It is here on our bookshelf now and is treasured. It was like meeting an old friend seeing it on your blog.

The bit that sticks out in my mind was his account of fishing in coracles, he likened them to black beetles.

My ancestors came from the west of Ireland and I feel an affinity to the place.Tony's auntie lived on Achill island, I think her telephone number was Achill two!

Sounds interesting, Pat, and, by the way, I don't think I have mentioned it previously, but I really like that new header photo of the arched bridge. Quite lovely!

I've eaten puffin (in Iceland) It's actually quite tasty. A bit like pigeon.

It was a treat though. Don't think I fancy it as a staple part of my diet.

Thank you - your answers have prompted me to do a meme for tomorrow.

How interesting Pat. I've always wanted to buy an Island! I might try amazon for a copy. Thanks for mentioning it.