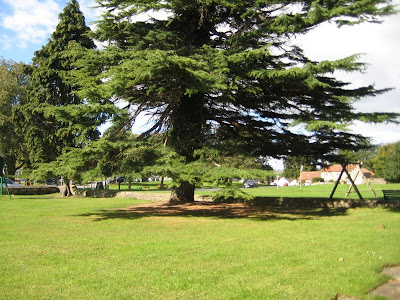 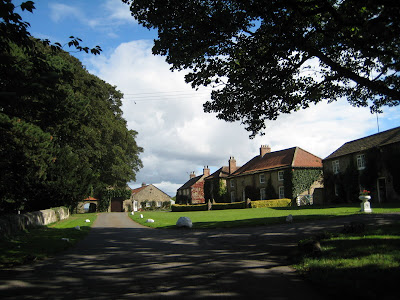 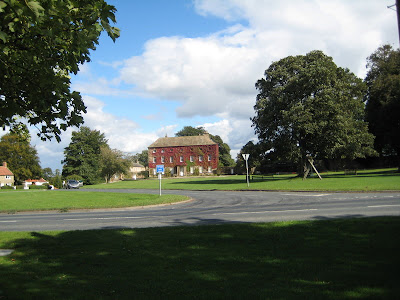 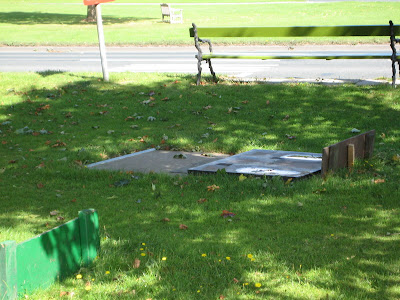 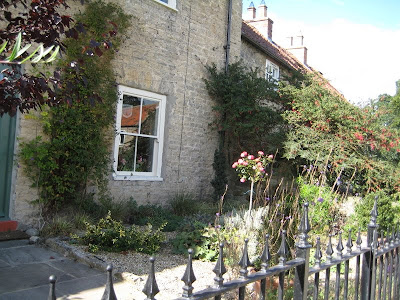 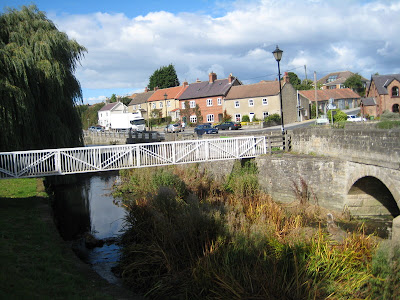 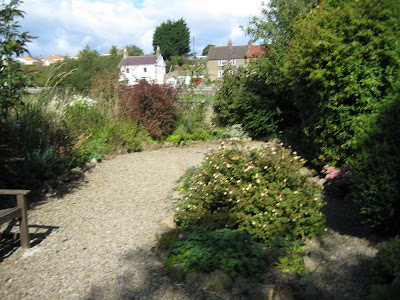 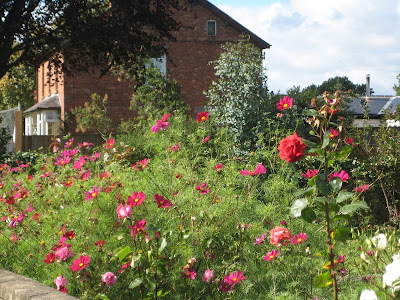 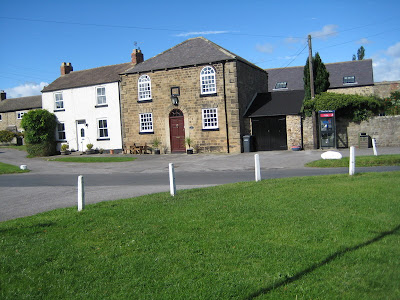 How often do we drive through villages on our way somewhere and only see that one main road through? I do this often several times a week through the village of Crakehall on my way to Bedale or Northallerton.

Yesterday the farmer had an appointment witht the Physiotherapist in that village and Tess and I went with him. He parked the car by the village church and Tess and I walked round the village, knowing that he would be about three quarters of an hour before he came back.

What a delightful village it turned out to be. There are about half a dozen well mown village greens - one of which (in front of the Hall) is the village cricket ground. All around the edges of the greens are pretty, well-cared-for old stone cottages with lovely cottage gardens full of country cottage flowers - like the cosmos in the picture.

We didn't see a single vehicle as we meandered along the lanes and then set off along a narrow but obviously well-used footpath - not knowing where it would lead us.
Half way down the path was the village penfold from earlier days (for readers in the US, this was an enclosure where lost sheep could be stationed) and this has been transformed into a lovely little garden with a sheltered seat.

Eventually we came out on to the main road right by the side of the beck - which is the same beck that runs through our fields here - shortly after Crakehall it enters Bedale and becomes the River Em on its way to the Swale, then the Ouse and finally into the Humber estuary and out into the North Sea.

Once back on the main road we wandered along a raised footpath and onto the big green, stopping to photograph the Village Quoits Court outside the village pub. They have an active quoits team which plays regularly throughout the summer months.

We crossed the road and went into the churchyard, where there was a conveniently placed seat from which we could see when the farmer returned. We sat there in the sun and I noticed that the path was made of old tomb slabs - they made such interesting reading and were certainly food for thought - 'Margaret, loving wife, died in childbirth in 1823 aged 32 years; James, dearly loved, died in 1796 aged 2 days; Eleanor, beautiful daughter died aged 11 months in 1801. Goodness me, aren't we the lucky ones with all our advanced medical care?

We drove on to buy the grass seed for the field the farmer has just finished ploughing and then came home in thoughtful mood just thinking how lucky we are in so many ways.

What a delightful village Pat - I hope it will always remain so and not be defaced by any modern intrusions. It is good to know that such places still exist in England. Your photos are wonderful and made me feel that I had been there myself. We are indeed fortunate these days - the inscriptions on those tombstones are so sad.

That village is neat as a pin! I love that style of architecture.

We don't have "mackerel" skies here, Weaver, that I know of. We can be sure of rain when the seabirds circle. The only sky saying we have is "Red sky at night, sailors' delight, red sky at morning, sailors, take warning!" I'll be introducing "mackerel sky" into my descriptive vocabulary as of now!

I love seeing your pictures of this village. I read so many English novels (usually mysteries) that are set in English villages that it helps to have a visual idea of what it means to live in a village in England. I am not sure if we have villages in the U.S. Hummm.

The last time I was in England, we just set off towards our destination on what ever small road we could find. Much better than the interstate.
One of my funniest village experience was coming down a much used road and a small herd of cows was very happily munching the way across the main green, road to the other-side. I don't know if this was a daily occurrence or it was a mass but slow escape ! everyone slowed down and then drove on...

What memories your lovely post has conjured up for me. I just loved the Yorkshire villages, where life seems to carry on in the same way it has for nearly a century - I know that is not really true, but it seemed so. Cheers, Robin

Beautiful village. It's time we returned for a visit -- I can feel it in my bones. But I do dread the long uncomfortable flight.

what a lovely village :) your photos make me feel warm.

I love the English Patient too! (film and book)

The Cosmos are really beautiful. How fortunate you are to be able to see a village like that!

What a beautiful village, Pat. I don't know whether you intended it or not (I suspect you did), but I loved the format of this posting, with the center column running straight through the village photos, just like a straight road would run through the village.

A delightful visit as I really don't know your area very well at all!!
Have a lovely weekend ;-)

I really enjoyed this walk that you took us on, such a delightful village.

Great photos, Weaver. Glad you and Tess had a pleasant day out and hope the farmer feels the benefit of his physio!

I love living where I do, but your description and accompanying pictures, Pat, almost have me loading up the car and heading for the nearby A1! A trip up to Yorkshire is long overdue.

What a lovely village.

I love little stone cottages with beautiful gardens. A lovely tour thanks Weaver.

I new it looked familiar but I didn't guess right. Like you we usually drive staight through always too busy to stop! Lovely post Weaver.

There are about a half-dozen good cut village greens found the village cricket pitch. All around the edge of the greens are very well cared for old stone houses with beautiful garden full of flowers home country house as the cosmos in the image.

Glorious photographs, Weaver. So glad you enjoyed the excursion.

It's such a shame many Anglican churches have strict and narrow rules now about what is and is not allowed in graveyards. So much history in what is said. So much in the way it's said too - and in the style of gravestones.

I have just dropped in on your blog for the first time, via Marmalade rose- a good friend of mine. So good to find someone else in this blogworld who is so close to where I am, such a small world isn't it. I love walking around here with my dog, a collie-x and stopping off in places that I usually simply drive through - so much to see. Great to meet you!!

The main road we walked along a raised walkway and large green, stopping to photograph the national Village quoits outside the village pub. They are active quoits team that plays regularly throughout the summer.

I loved the villages of Yorkshire, where life seems to continue in the same way that it is almost a century - I know it's true, but it seemed.

What is a charming town that turned out to be. There are a half dozen sheets of the village well - one of which (in front of the room) is the village cricket field.

Wow what a natural beauty around the village!.Superb atmosphere and great beauty in the all picture like heaven on the earth.

All around the edge of the greens are very well cared for old stone houses with beautiful garden full of flowers home country house as the cosmos in the image.