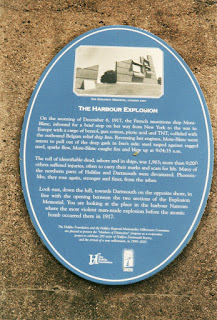 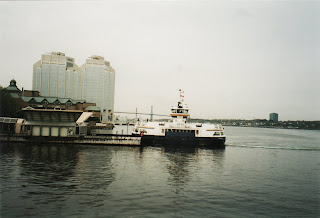 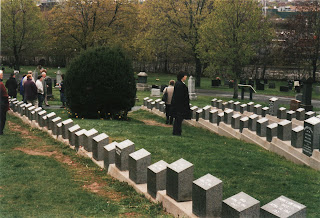 It is twenty-five years ago today since they located the wreck of the Titanic on the sea bed of the Atlantic, off the coast of Nova Scotia. Even before the film glamourised it, the sinking of the Titanic in April 1912 had settled into history as a fact known by most people. Apparently they are still wrangling over who owns the wreck on the sea bed as artefacts brought up from it are much sought-after and thus money-making.

In 2003 the farmer and I went on a tour of Maritime Canada and our first stop was in the beautiful port of Halifax. It was here, in 1912, that the survivors/dead who were recovered were brought, as it was the nearest landfall. There is a surreal atmosphere in the cemetery (photograph above) where the graves are laid out in the shape of the prow of a boat, and where quite a few, including two small children, were never identified. 121 of the dead are buried there. Over 1500 died.

But that was not the only tragedy to fall on Halifax. On December 6th 1917, quite soon in fact after the Titanic disaster, the French munitions ship 'Mont Blanc' blew up in the narrows as it called for a brief stop on its way to New York with munitions for the First World War. The explosion was the largest man-made explosion in history before the advent of the atom bomb and it killed 1963 people and maimed another 9000. It also destroyed large parts of Halifax and Dartmouth.
There are still a few people alive who can remember the disaster. But Halifax remembers it regularly by tolling bells on a huge memorial. The town has been completely rebuilt. It is a beautiful place.

The third photograph shows the entrance to the harbour. It is here that the boats carrying the survivors and the dead who could be located after the Titanic disaster would dock. Because the imagery of the Titanic is so large to most of us, it is a rather solemn place to stand.

The holiday, which then toured Novia Scotia and Cape Breton Island (and Anne of Green Gables country) was one of the most wonderful holidays we have ever had - and that is saying something.

To think that the Titanic now lies on the sea bed being fought over is just ridiculous - the power of money, I suppose.
Posted by The Weaver of Grass at 00:46

I wonder who turned money into the Little Tin Pot God it is today? Possible the first person who had the idea of making the stuff. I'd prefer to work with a barter system. I'm sure that would curb people's greed...

I watched Upstairs Downstairs a while ago and thought of the Titanic a great deal because one of the lead characters drowns on the Titanic. Somehow this brought the story more alive for me, more alive than even the film.

Visits to places of tragedy and trauma are haunting. Thanks, Weaver.

There is currently a Titanic exhibit in Columbus I want to see. There's something very haunting about the remnants of so many souls lost. For me, it's a way of paying tribute.

So often in the everyday we get so focused on our present lives, we forget to take the time to remember the souls lost in such tragedies. I knew of the Titanic and it's connection to that area, but I'd never heard of the Explosion and the loss of those lives.

Thank you for reminding us to take the time to pay our respects to so many.

Interesting and informative post. I didn't know about the Titanic graveyard. I always assumed they sent the bodies back to where they'd come from. But I guess not everyone could afford that.

I listened to a program on CBC yesterday about the finding of the Titanic. Only 98 years since the tragedy, yet it looms large for all of us.
I love to hear that someone from so far away was interested in visiting Cape Breton. While I live on an island on the west coast, Cape Breton is my birthplace and the home of my heart.

I've never thought about where they buried the poor souls from the Titantic tragedy. I think somewhere in the back of mind I assumed they were all lost in the sea but of course they were not.
Also, knew nothing of the 'Mont Blanc' disaster, hard to wrap my head around what that must have been like - awful. I've never been to Cape Breton Island but now am quite intrigued. Quite an educational post for me this morning!

Interesting post and pictures. Timely to remember the disaster and those whose lives were affected by the tragedy. But lets not forget the incredible feat of science, graft and courage that found the Titanic and revealed it's very secrets helping to add some realism and context to this historic tale. They have an excellent Titanic exhibition in the Docks Museum in Liverpool that we visited in the spring this year. I live opposite the house of a Titanic survivor here in East Yorkshire, Algernon Barkworth
X

I'm on my way to the beautiful port of Halifax tomorrow morning. There had been many improvements made by 2003 but I think it's even nicer now. It's a wonderful city and they seem to spend a lot of time thinking about how it can be made even better. There's a museum on the docks near the mouth of the harbour now - at Pier 21 - an immigrant's museum, as that's where many of them landed. Thanks for the post.

Despite the fact that I was born over twenty years after the Halifax Explosion and even longer after the Titanic's sinking - both events are etched clearly in my consciousness since I was raised in Halifax. I was early used to seeing people who were blind or disfigured from their injuries and several stark looking foundation remnants were located still on the steep hill overlooking the blast site. An area of about 2 square kilometres was obliterated but the larger part of the city survived intact, or only in need of fresh glass in the windows. The town of Dartmouth across the harbour also had loss of life and damage.

The Halifax disaster is almost beyond comprehension - it must have taken years for the community to recover from such an appalling tragedy. I find it rather gruesome that people should want 'souvenirs' from the unfortunate Titanic, but then 'there's now't so queer as folk'.

I was amazed to read about this terrible explosion.

We went to a Titanic exhibition here in Stoke-onTrent. Much of the pottery on the ship came from here. Throughout the exhibition there was music playing Nearer my God to Thee", it was heartbreaking to read how many lifeboats were launched half empty.

Thank you for sharing this post and causing us to remember those precious lives lost in both tragedies. I didn't realize it has been 25 years since the wreckage of the Titanic was found and I have a fair collection of Titanic books and articles! Just goes to show how easy it is to fall out of touch. I appreciate the photos you added today.

In the days when I was involved in the sheep industry in British Columbia I was sent to research the lamb marketing system in the Maritimes. Halifax was lovely, and impressive but it was P.E.I. that enchanted me...the green grass, the red soil, the blue sea and the wonderful lobsters! As well as the Island life described by Lucy Maud Montgomery.

An interesting post, Pat. I knew nothing of the Mont Blanc explosion, but thanks to you, I do now. I've spent a great deal of time in Canada, but never in Nova Scotia. I think I will add it to my bucket list.

Thank you Weaver. The boys spent the whole of last term studying The Titanic as their "topic", and I don't think there's a fact about it they don't now know.
I did not know of the terrible incident in Halifax, however.
And the feeling at those solemn places - it's certainly there, almost ineffable but one feels it, one always feels it. I remember so vividly crying buckets at Malta's war memorial, on a beautiful sunny day in the middle of a marvellous holiday.