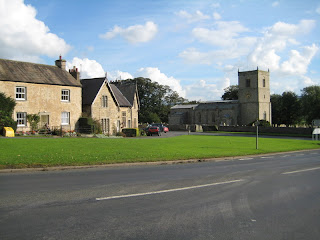 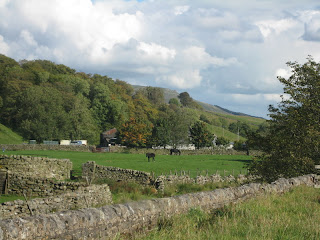 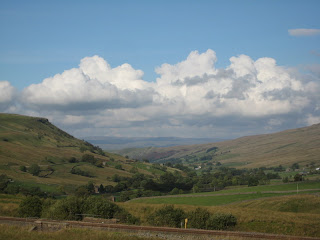 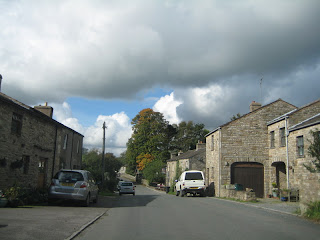 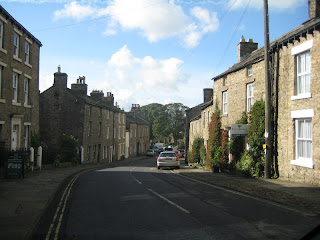 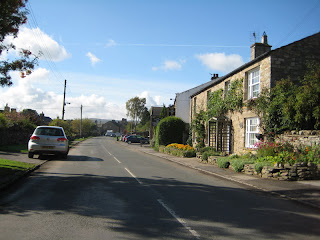 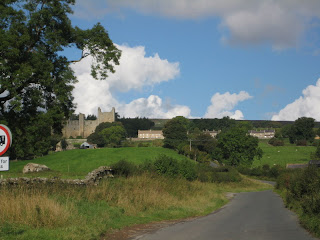 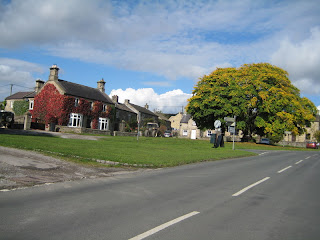 Today I motored through Wensleydale to Sedbergh in Cumbria to meet my god-daughter for lunch. It is a journey of about thirty miles, straight through the Dale and it takes about an hour. Luckily I set off early, thinking to take one photograph of each village I drove through so that you could all see some of our lovely Dales villages.
When I got just over half of the way there the road was closed and all traffic was diverted round by an extra ten miles or so, which was very frustrating. I only just reached our meeting place in time.
After a nice sandwich lunch (bacon and brie sandwiches since you asked) I set off back, still using the diversion and grumbling to myself about the long way round. All was forgiven though as once out in the open country - joy of joys - a young fox crossed the road just in front of my car and jumped the wall into the field. What a beauty he was - a deep, deep red and without a single blemish. The farmer, on hearing this said he would be a young one who had not yet developed the skills of stealth where humans were concerned - also his deep red colouring means he was young too. It made the whole diversion bearable.
The diversion was across a high moor, a road I know well. The weather was lovely and the sky was fantastic. I took some long range views for you to see - it is all a bit distant but it is the best I could do.
Down in the dip once back on the correct road, there is a farm where they have traditional Dales ponies. One of the mares has had the sweetest little foal - I stopped and took a photograph - again it is distant but that was as near as I could get.
So enjoy the photographs of our lovely Dales villages - and the distant fells. Storms are forecast for tomorrow, which made today all the more enjoyable.

Photos. Left/Right - from the top.

Dales pony mare with her foal.
Wensley village - it was this village which gave the dale its name - but it was largely destroyed by plague in the sixteenth century.
Hardraw -
View up the Mallerstang - note the Carlisle to Settle railway in foreground.
Carperby
Askrigg
Redmire with its magnificent tree on the green.
Castle Bolton with its medieval castle (Mary Queen of Scots imprisoned here).
Posted by The Weaver of Grass at 09:44

Thanks for sharing your lovely trip! You live in beautiful surroundings!

I wondered where you had disappeared to, Weaver. I was hoping for another dance! Glad to know that you weren't suffering any ravages from the ball!

Thank you, Weaver, so much for voting for my poem!

Castle Bolton brings back so many memories. The first time I set eyes on it was at sundown when it was swathed in rich (warm) golden light. However, when I visited it, it was cold and atmospheric ... as a castle should be, I guess!

What a lovely drive, and beautiful photos of those enduring and endearing old villages. I was reminded of the few days we spent in the Dales, how impressed I was with the countryside and how I have often envisaged living in one of those small English villages.

The Dales are beautiful, and whenever I see them I am reminded of watching Postman Pat with my son when he was little, which makes me love them even more!

What a beautiful journey - thankyou for taking us with you. You certainly live in a lovely part of the country and your photos do it justice. Bacon and brie! My favourite.

Thanks again for taking us with you. I recognised Askrigg at once as we stayed in a cottage across the road from a lovely lady called Mary and the pub in that street. I have an abiding love for the dales from that one week. Hope I can return one day but if I can't then I'll just have to visit via your blog.
Cheers
Helen

What a beautiful Autumn day, Weaver, and what a perfect place to be. Lovely photographs, thank you.

Beautiful surroundings! Eryl reminded me of watching Postman Pat with my kids.

What a lovely drive I just had with you. Poor Mary - all that green and beauty and she, trapped inside.

The tree on the green must be a chestnut tree surely. I love your trips, walking or driving. Would loved to see the fox. My mother used to have a den of foxes living at the back of her garden and the vixen and cubs would come and play on the lawn.

Sometimes destiny leads where we would not go by choice and more often than not, we get a special reward, as you did with your beautifully red fox.

Glad you came with me on the trip - wish you could have seen the fox.

Thank you for these lovely photos of Wensleydale. So many good memories of our times in Yorkshire. I remember a quiet, high road from Hawes, going across the high hills and then downwards again, going south. A stunning place on a day of good weather. I wonder if it is the same road that you took?

What glorious countryside - as I knew, but still good to have your photos and your account.

I always love joining you on your outings - still so green there!

To an exile these are wonderful photographs!