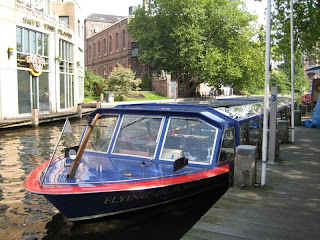 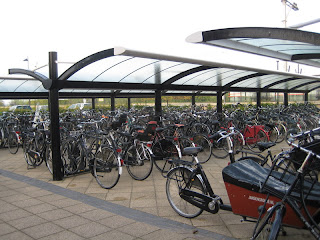 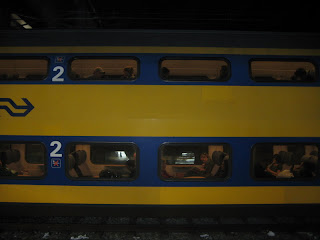 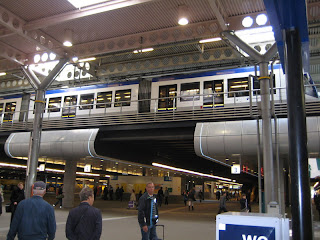 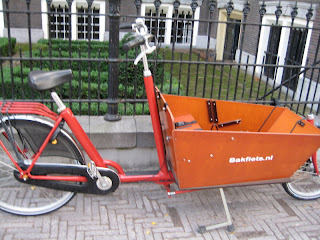 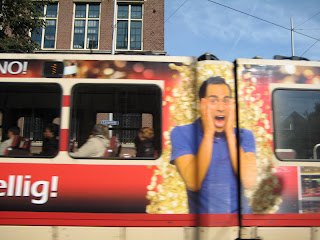 before I come down to earth and start writing about ordinary, mundane things again!

Is it my imagination, or is the whole transport thing much more efficient over on mainland Europe? I know we were only there for five days but everything seemed to run much more smoothly.

Every train we went on was on time; every tram we mounted had plenty of room and moved along at a good speed; the canal boats were zipping up and down; and the bicycles - did I mention the bicycles? - of which there are literally millions - you can hire them at every railway station, there are special cycle lanes - oh I could really wax lyrical about the bicycles.

So here, for my last selection of photographs of our short break, are photographs of transport. We spent an interesting afternoon in The Hague, seeing the Parliament Buildings and the Royal Palace (and even seeing the Foreign Minister giving a TV interview!). The station there was on two levels and really looked like something from a space movie - and the trains were spot on time too.

We spent a pleasant hour on the canals in Amsterdam, where river traffic flows up and down - canoes, little motor boats and big canal cruisers - all seeming to pass each other effortlessly.

Double-decker trains seem to be the norm there and it is great being 'upstairs' with a fantastic view.

As for the bicycles - everyone seems to ride one, children sit in lovely little boxes on the front, or on the back, of their dad's or mum's bike; dogs are taken for 'walks' on a lead attached to a bike; I know the flat terrain makes cycling easy but it all looks so idyllic. Maybe I viewed it all through rose-tinted specs.
Posted by The Weaver of Grass at 07:24

One might wonder how many "really fat" people you saw. Surely the city folk there are getting much more exercise than we do in the U.S.!

Although there probably are travel hiccups on the continent, one always gets the impression of greater efficiency. The Dutch must rival the Chinese for bicycles!

I often wish I could get anywhere I wished on a bicycle. With a basket on front just like I had when I was little.

I love the photograph of the planted field in your last post. Just like a van Gogh painting.

It's the nonchalance of bikes that I love in holland so unposey if you know what I mean!

Yes - a wonderful collection of the various efficient transport! I agree with the point about cycling on flat roads - never an option here - well only for the super fit which I am not - yet! (laughs)

The thing about the Netherlands is that the whole country is only about the size of East Anglia - so it's a lot more efficient simply through its compactness.

Lovely place though and fantastic people.

Did you get pancakes while you were there?

Great pictures, thanks for this informative post, I would love to go, never been.
X

Another very interesting post, Pat. I've enjoyed this series on the Netherlands.

I love your header! It's so typical of the Netherlands. Great that you also visited the Hague where my husband and I met. I worked there at a school. He lived there, and was born and bred there. The Queen also lives there.Last week The Hague was the scene of the annual ceremony of the Queen's Speech from the Throne. Thousands of spectators watched the royals, who were occupying various coaches, the golden one of course by the Queen, the Crownprince and his wife Princess Maxima.Did you see this spectacle? It always takes place on the third Tuesday of September.

It's sad isn't it? I believe that once upon a time our own transport system was efficient. I used to cycle quite a lot when I was a child but my leg muscles wouldn't get me far now! I have always been attracted by the Netherlands but sadly never been there, so your recent posts have been a joy.

I have a friend who moved to the Netherlands from Montreal. And what you describe is exactly what she describes. So clean, efficient and energy conscious. They do their grocery shopping on their bicycles. Great pics, Pat.

Love the bike with the orange spacious bin at the front:) Can you believe it, I've never been on a double decker train!
Your new header looks like a Dutch painting! Thanks for sharing your trip with us.

It really does sound like you had a thoroughly marvellous time and all your photographs indicate why. I have always got the impression that public transport on the continent is much more smooth and efficient than it is here.

Very envious that you got to see your favourite Van Gogh paintings in the flesh; if I manage to retire with enough money I hope to travel around all the galleries in the world who hold my favourite artists' work.

It's not your imagination, Pat. Transport is on the whole better in France, Spain, Germany, the Netherlands, Italy (though not as efficient in southern Italy and Sicily), Belgium, Switzerland, Austria etc in my experience. However, we are gradually improving here in the UK - it's just that some of the privatised networks (talking here of rail) are a lot better than others.

When my husband and I visited the Netherlands, I saw a mother of three - on a bike, with all three kids. Amazing. When they were young, I've had all three of mine hang on me at the same time. But to ride a bike at the same time? What an incredible women.

Definitely more efficient except in Britain when leaves get on the line.Bikes are top transport.

You're not imagining it - and if you are amazed, just imagine how we Canadians feel when we visit. We must have the world's most inefficient modes of transportation. Few buses and virtually no trains outside of Toronto and Montreal - only the tourist train that heads west once or twice a week. Everyone bemoans the traffic snarls but no one is willing to part with the tax money for a decent commuter train system. Bikes are fine in the summer, or on the coast where we have little snow, but they aren't at all practical for a normal Canadian winter.

Public transport is so dangerous here that I wouldn't dream of using it. When we were in Britain on holiday it was an absolute boon to be able to hop on and off the underground as well as buses. If Europe is even better.... wow!

What a colourful collection of these various forms of 'transport of delight' ... (I had forgotten all about this song until your photos triggered a memory).

weaver amsterdam was where i spent part of my sixteenth summer and it still murbles and burbles inside me with the greatest thrill when i see pictures of it - modern or not. steven

These comments make really interesting reading. Thank you so much for joining in.

I did enjoy your photo album from the Netherlands. We spent a happy holiday there a few years ago.

I loved the Van Gogh Museum too, and the beautiful blue and white ceramics and tiles in the Rijksmuseum were fascinating.

I would have liked more time to explore the countryside, but we saw life going by as we travelled by train. Clean and efficient trains too!