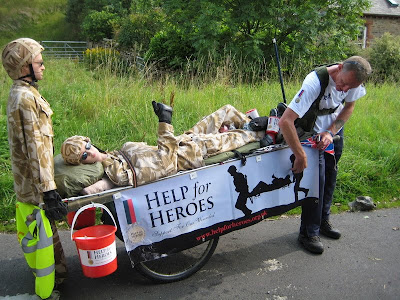 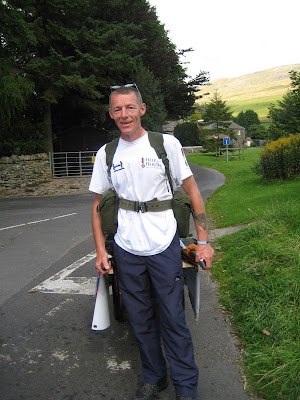 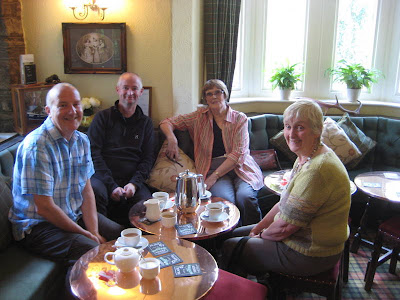 than a leisurely lunch in a lovely pub with lovely friends, I ask. Yes, there is.
If it is preceded by a wonderful journey through exquisite countryside on a glorious day then that makes it even better. And that is what I did yesterday.

A friend and I set off in her four-track, complete with programmed sat-nav to drive to The Black Swan in Ravenstonedale - a pub I have been to many times before. My friend had not made the journey though and was blown away by the scenery as we turned off the road at Pendragon Castle and travelled across empty wild moorland to get there.(the sat nav had a small nervous breakdown at this point, but rapidly readjusted itself.)

Our friends were already waiting there for us and we had a delicious lunch of smoked haddock sitting on a bed of mashed potatoes, a layer of spinach and finally a poached egg and cheese sauce - a simple enough combination and one to remember for future use. We asked a man at a neighbouring table to take our photograph and you can see it above - lovely couple of hours.

The friend and I set off on our return journey (the other two live in the opposite direction and this was a half-way meeting point) going back the way we had come - and lo and behold the scenery seemed totally different but just as beautiful.

Once we turned on to the Kirby Stephen to Garsdale Road (running alongside the Carlisle to Settle railway line for much of the way) we came across a chap pulling a stretcher. When we caught him up, we stopped for a chat and to put some money in his bucket. For this man is walking alone, pulling the stretcher with a model soldier at the back and a wounded soldier model on the stretcher. All his belongings are hidden under the stretcher, so it is quite a load to pull. He is walking from St Bees, on the West Coast, to Robin Hood's Bay on the East coast. Each night he is camping in a field by the side of the road and all the way he is collecting money for 'Help for Heroes'.

Whether or not one supports the war in Iraq and then in Afghanistan (I personally do not support either war at all - I think both are criminal), one cannot doubt the efficacy of the Help for Heroes charity. A friend's grandson was injured there some months ago and is, happily, almost restored to full health. Many, of course, are not as my friend's daughter told me when we met a short while ago. The injuries some of these brave young men sustained are beyond our comprehension. Therefore any money given to the cause is worthwhile.

We were struck by the man's fitness, his pleasant personality and the work he was putting in for such a good cause. His journey yesterday was due to end in Hawes - we travelled the twelve miles or so to Hawes after leaving him - and it was almost all seriously uphill - so even more credit to him. Today he is travelling almost past our farm and I wished I had asked him to call in.
Posted by The Weaver of Grass at 07:09

We are blessed to lead such privileged lives where we have the time and means to enjoy a leisurely lunch and the glories of a late summer drive in the countryside. I felt like I got to tag along!

Thanks so much for taking me along!
And blessings on the "Help For Heroes" fellow. Too many people have died and too many are grievously injured. It is wonderful for see someone willing to help in such a way.

Happy Saturday to you!!

What a lovely way to spend a late summer afternoon. That lunch sounds delicious.
We are all aware, here, of the sacrifices made by the young people who have been sent to Afghanistan. The saddest thing is that we hear about the deaths, but the terribly wounded are sent home in near obscurity. The country is reeling from a recent decision by the government not to extend the same benefits to these young wounded as were extended to veterans from the two world wars.

A lovely day, beautiful scenery, good company and good food - a perfect combination, I'd say. Help for Heroes is one of my pet charities. Like you I am totally against the war(s) but support our troops. One of our grandsons is running a half marathon tomorrow in aid of Help for Heroes and one of our sons-in-law has a pitch at a car boot sale also in their aid. As the well known slogan says: 'Every little helps'!

What a lovely day for you and your friends! I, too, deplore the wars, but my heart goes out to those who have lost so much as a result of this insanity.

Greatday out and a cool idea to meet halfway.You mention a railway line to Settle.I'm sure I was in Settle once, small cobblestoned village as I recall.The unusual name stayed with me.

Looks and sounds like a wonderful day, we all need the odd day like that. And to meet such a laudable man too. Good food, good company, lovely scenery and a jolly good example to us all.

If there is one topic to make my blood boil it's these bloody wars: why is this still happening: young men being sent to their deaths or, worse, living deaths by the old men who run things, and for what? I have yet to see what benefits war brings.

You have taken me back to happy days exploring the Dales, when our boys were small.Just before we moved from Yorkshire, we took a day trip on the Settle-Carlisle railway line and it was unforgettably beautiful. Your lunch sounds a very happy occasion.

I also agree that the two wars are/were wrong, but I do support "Help For Heroes". We have not come very far from the trenches of WW1.....

Yes, war is inhuman and criminal.


But you knew that we agree on the important stuff, like the beauty of the `Dale!

It's good to enjoy the companionship of good friends (especially in a good pub!)

I take my hat off to the man walking coast to coast for "Help for Heroes". I think it is disgusting for the Govt. not to support our young men who have put their lives on the line to fight in our country's name.

Thanks for the comments.