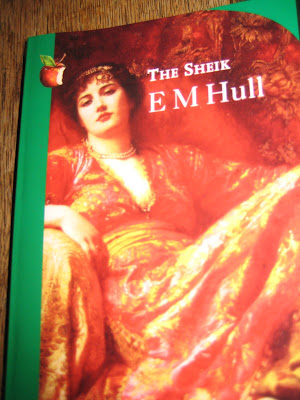 In the late thirties, when my sister married and left home, she left behind a giant stack of film annuals, and a large poster of Rudolph Valentino on her bedroom wall. So, as I learned to read, I became a film fan manque, so to speak. I was reared on Jean Harlow, Nova Pilbeam, Mae West - and above all, Rudolph Valentino. All these sepia portraits of glamorous women played a major part in my life - so much so, that when I finally read that superb read "The Great Gatsby" the characters were immediately brought to life from those old portraits. Oh what glamorous and exciting lives they lived compared with mine - I thought as I got a bit older.
Fast-forward ten years - still in the age when "sex" was rarely, if ever, mentioned and when there was no television and when my reading was confined to books like "Black Beauty" (my friend, Janet, and I used to cycle to her grandmother's farm on our bikes, pretending we were on Black Beauty and another horse - we took it in turns to ride Black Beauty, keeping a careful note so that there was no cheating!) Janet suddenly came up with a bright idea. We had discussed what people did when they were married (?) and I did once ask my mother if you could have a baby when you were not married and when she replied 'no' I pointed out that our next door neighbour's daughter had a little girl - and I had never seen a husband. She said he worked away and when I kept up the questioning she told me to go away and play and not ask silly questions.
Fortuitously, Janet found a book her mother had read and put on the bookshelves. It was called The Sheik and Janet had read it when her mother was away for a few days and her dad was in charge. She said it was all about what people did when they were married - and she thought you could also do it when you were not married because the lady in the book wasn't married.
She duly arrived with said book when my mother was out and we hid it under my winter clothes in the drawer of the dressing table. Each night, after I had gone to bed, I read a few pages under the sheets, reading by torch light. Oh how we gobbled up the romantic nonsense - and spent hours discussing the finer points while riding Black Beauty to Fiskerton and back!
Well, Virago have republished The Sheik (2002) and I have just been lent a copy - how it brought back memories. It is racist in the extreme and sexist in the extreme, but in both cases this would not have been thought odd when it was published in the 1920's.
But the really interesting thing is that it was written by Edith Maude Hull who was the wife of a Derbyshire Pig Farmer. Nobody seems to know much about her as she appears to have spent her life either travelling or being a farmer's wife. All I can say is that she had a very vivid imagination. She also provided Valentino with what was probably his greatest role (which explains why my sister's wall poster showed him in arab dress). I can't help wondering how much EM Hull was paid for the film rights and whether she died a rich woman. The write-up in the front of the reissue says she 'fell silent in 1939.
Did I enjoy it this time round? Not really - it is horribly dated and as the blurb says 'a touchingly artless expression of female sexual masochism' - but it sure brought back exciting memories of clandestine reads. As far as I know my mother never knew anything about it.
Posted by The Weaver of Grass at 05:49

Lovely. At about the same age I acquired - I forget how - an ancient, dusty book entitled How to be Happy Though Married. It became very popular and did the rounds of the school cloakroom!

Hi. I wandered into your blog from Pondside's (I think!)and really enjoyed reading all your posts.

I loved your photo of Rievaulx Abbey too - I've visited it many, many times. Also, I went to a catholic secondary school in Rotherham and the 4 houses were named after abbeys. We had Fountains, Kirkstall, Rievaulx and Roche - I was in Rievaulx! Happy times :)

I have often thought that for all today's open attitude to sex education , it hasn't improved young people's morals or prevented teenage pregnancy. I can see that youngsters need a bit more information than we had at their age, but having removed the mystery of 'what people did when they were married' we seem to have lost so much more. The childhood years get shorter and shorter, and innocence has almost become a dirty word. I remember reading with a torch under the bedclothes but can't recall exactly what now.

Many of these 1920's books found their way into what we used to call the Empire or the Colonies. Perhaps they are still there in the libraries fine examples of Eng. Lit.
Apropos racism - a 1920's book I'm reading speaks of a moneylender as a "Scotsman from Palestine"!

Hmmm - could make a confession of my own along these same lines, but despite the passing of 45 years I still blush at the thought of which book it was that I drew the short straw over going in to buy!

As for The Shiek and Rudolph Valentino - women adored him so much that they committed suicide when he died didn't they? How one probably very ordinary pig farmer's wife changed people's lives the world over . .

weaver - what a great story. wouldn't that be a great meme?

books i read by "flashlight".

Well, you naughty thing, Weaver! I never read by torchlight under the covers - cos I didn't have a torch!

A book that my mother snatched out of my hands, she had left it lying around, was "Forever Amber". She warned me not to read it. In those days it was too scary to disobey!

The little incidents that make us who we are...

Oh dear! My sex education came through The Golden Ass, aged about 11, not that I really understood a lot of it!
(my father was a University Professor so we had a lot of books and some really not siutable for some one with a voracious appetite for rading books, and who couldnt spell!)

What a fascinating read, Weaver. I have seen the film, but never read the book on which it was based, so shall seek it out now.

I recall stealing a copy of "Health and Efficency" (I think) from a brother's bedroom when very young, and myself and my best friend Margaret being horrifed by pubic hair. We thought there was something wrong with all the people in it.

Reading under the covers by torch
light and midnight feasts.Nice memories.East Lynne and The Scarlet Pimpernel were about as exciting as it got.A girl brought
Lady Chatterley's Lover to school covered in brown paper.I never got
to read it. Just before it was my turn,she got caught and was expelled!I still haven't read it.

As a child, my first frisson of literary sexual excitement was far more tame, Weaver. I loved Emily of New Moon by L M Montgomery.

I also felt great flutters of excitement at the sight of the local news rag, the Truth, which featured big busted women, naked on the front cover. My father allegedly bought it for the sports coverage.

But how could that be, I wonder now. My father took no interest in sport.

Thanks for this, weaver. It's wonderful.

Lady Chatterley's Lover was banned in South Africa when I was in high school but that just made everybody more eager to read it. I rember when I was at boarding school a copy arrived after a long weekend .... covered in brown paper. This well thumbed edition also did the rounds.
To change the subject .... your latest header is magnificent!

I was amazed to find a copy of Lady Chatterley's Lover in my grandparent's bookcase. I 'borrowed' it and took it to school. For a whole week, my popularity rating soared. Although, I remember the school bully snatching it and eagerly thumbing through it. "Just a load o' swear words," he moaned. I often wonder if he ever actually got to read it later in life.

Beautiful pics and interesting site! I wandered into your blog and saw that you liked "Elizabeth and her German Garden" which is one of my favorite books too. I love all things British and can't wait to come back and browse some more when I have more time.

I was naughty. I read The Karma Sutra (borrowed furtively from someone at school,) Peyton Place, and being a bit of a latch-key kid,I furtively read my parents "Guide to Marriage"(how could that not intrigue in the bookshelf!!)after school when they were at work. At 11 years old that made my eyes stand out on stalks. My mother discovered the Karma Sutra in my room and grilled me about it. "Tame" I said with a shrug of the shoulders.I wondered what all the fuss was about with Lady Chatterly's Lover.As a 19 year old, I thought it was a wonderful literary piece and set me on the road of appreciation of D.H. Lawrence's other works, particularly Sons and Lovers, which I thought was simply the best!Great post Weaver.

...when I say latck-key, we had ready access to neighbours if we needed them, but they probably thought how quiet and well-behaved we were with our nose always in a book!

What an interesting blog! I've just finished 'The Prime of Miss Jean Brodie' and I loved the scenes in which the 1930s schoolgirls discussed sex! Much like you, I suppose!

Loved reading these - gosh how we got our sexual "facts" in those days eh! I do remember Lady Chatt going round school in a brown paper cover - it fell open at the relevant page, too. And then there was Fanny Hill - that was another sensation. Goodness me, how times have changed.

I stumbled upon a Harold Robbins book when I was 11 or so - if memory serves me it was called something like "79 Park Avenue" - it didn't leave much to the imagination and settled whatever questions I'd had up to then.

really enjoyed reading all your posts.

I found "Forever Amber" in my mother's bookcase and first read it as a young teenager. It's still one of my most favorite romance books and I have re-read it many times over the years.

i discovered a medical encyclopedia.. nd ..there were no pictures...bt i preety much figured out thru the anatomical drawings wat goes on... boring... lovely article...