We know you are there! 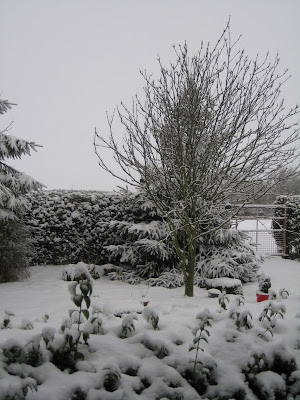 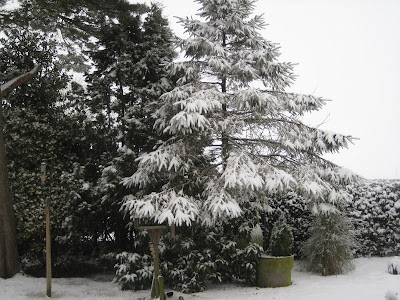 There was a day - pre twenty-four-hour, wall-to-wall weather forecasting - when snow came by stealth. We would wake to a strange light in the bedroom and a strange stillness, as though the world were wrapped in cotton wool. We would draw back the curtains and gasp at the beauty and call out "snow!"

Now, of course, we know it is on its way. Meetings for coffee, shopping expeditions - all have the proviso 'that is if the snow isn't too bad.' And we know that there is a warm front creeping up the country and a cold front making one last stand down from the Arctic, and where they meet there will be snow.

So on my nightly 'back-easing' stroll around the house at 1.15am I pulled back the curtain and there it was, looking ghostly in the dark but covering the tops of the bushes in the garden. Drawing back the curtains at 7am this morning I had a better look. Somehow snow looks so much more exciting when the sun is out and the snowy world is sparkling. No such luck this morning - grey, misty and still sleeting, but not freezing.

The farmer, for ever an optimist, sets out as usual up the lane in the car to fetch the morning papers, closely followed by Geoffrey, our neighbour. Five minutes later they are both back - no papers yet, the paper van hasn't got through and the paper shop ladies are all standing about drinking coffee and complaining. So no Times crossword over breakfast, but a joyful expectation of doing it over coffee at lunch time.

We tell ourselves that this has got to be winter's last stand - it is March on Monday for goodness sake, we say - the snowdrops meanwhile endure being covered up once more - they have seen it all before Snowdrops - or to give them their proper name - Galanthus means 'milk flower' so they have really not been named after snow at all. But they weather whatever is thrown at them - and bring a few into a warm room and like the hazel catkins they open up and show us their real worth.

Today is my poetry reading day and I have chosen what I am going to read. Now of course it is in doubt, as it is one of those things with a snow proviso on it. I asked my son what he would read and he suggested Basil Bunting's Briggflatts. I had not read it before but am captivated by the language. So I leave you today with just a little snippet which looks forward to Spring and the May blossom beside the river Rawthey. If this does not lift your spirits I don't know what will.
Excerpt from Briggflatts by Basil Bunting (taken from Collected poems published by O U P)
Brag, sweet tenor bull,
descant on Rawthey's madrigal
each pebble its part
for the fell's late spring.
Dance tiptoe bull,
black against may

That's it for today, from a snowy Wensleydale.
Posted by The Weaver of Grass at 00:44

Hi Good weather , snow is there I feel to live with snow, May I visit but the money.

I went to brush my teeth before bed just now and thought to myself, how lucky we are that summer is nearly over and we have not had too many bushfires this season, and no deaths as far as I know.

Then I take a quick look at the blogosphere and read about what it's like for you, Weaver.

I hope you get to your poetry reading.

I had a feeling you might be under snow again Pat - just when we thought we had seen the last of it. We seem to have escaped this time and just have heavy rain showers to look forward to. Hope you get your Times today and make it to the poetry reading. Lovely snippet.

Had a mini blizzard up on our hill last night. This morning the snow is slushy and slowly disappearing. I just hope it manages to disappear before the temperature drops. I hate walking on ice.

In Connecticut we've had snow in April, Lord I hope that's not the case here..we're all alittle stir-crazy right about now.

hello weaver - it snowed off and on for the last couple of days here. it'll likely snow off an on until late march or early april. i broke a shovel yesterday lifiting the stuff!!! but it's beautiful. from the waking up exactly as you describe it, to the wading through it, to watching the schoolchildren making snowmen and asking me to photograph them, to my last look out the window across the grey scale. all beautiful!!! have a peaceful day in the dale steven

Snow can certainly alter the pace of life, whether we like it or not. It slows all our cogs and gears...Except the brains of people like you, which go into overdrive and produce a delicious post!

Won't we all be glad when spring finally arrives?

It has to warm up some time doesn't it, let us hope so.

I loved your comment about the farmer and the blackbirds!

We've only had snow 3 times in the past 50 years and without our imported water this would be somewhat an arid, parched place. We've had mandatory water rationing for almost a year now, so any rain we get is most welcome!

Sighhhh .... I know snow can be tiresome day in and day out but a little whisper of it would really be appreciated over here.

I love when snow catches us by surprise.

There has to be an end to this winter for all of you over there! I'll bet the spring will be all the sweeter for the ton of snow you've had!

Oh how I loved your first paragraph about the surprise it used to be to have a snowfall. I remember that cotton-wool feeling so well! I hope you get to your poetry reading. The poem you excerpted was great! And I hope the crossword puzzle arrived before the end of the day!

Love the snow photos.
We didn't get a flake this year.

I rather liked the days when we didn't know ahead of time what the weather was going to be. I remember my grandfather (who scorned weathermen) telling me "if you want to know what the weather is, open the window and stick yer hand out!".
Cindee

Beautiful poem. Hope the reading goes well. How I am aching for spring, yet also thinking I should take a break from the weather forecast and have fun at being surprised again.


When men were all asleep the snow came flying,
In large white flakes falling on the city brown,
Stealthily and perpetually settling and loosely lying,
Hushing the latest traffic of the drowsy town;
Deadening, muffling, stifling its murmurs failing;
Lazily and incessantly floating down and down:
Silently sifting and veiling road, roof and railing;.........
and so on
I'm sure you know it already.
Another big storm heading our way here.
Long walk with the dog this afternoon.
Love the photo of Tess and the Farmer's dog.

Back easing stroll? Kitty & I patrol...

Thank you for all the comments - there is only so much you can say about snow so shall not answer them individually. Sufficient to say that today is so foggy that you can't see whether the snow has gone or not!

Well you really have had the weather thrown at you this winter, Weaver. We have escaped quite lightly by comparison. The photos are pretty, even without the sun. A lovely post, full of pictures in my head too. Little snowdrops cosy under the snow, waiting for it to go.