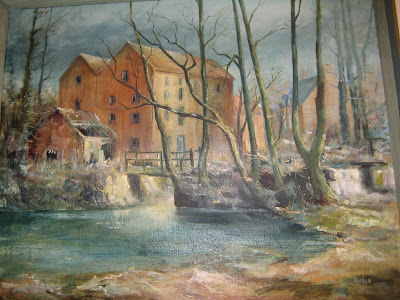 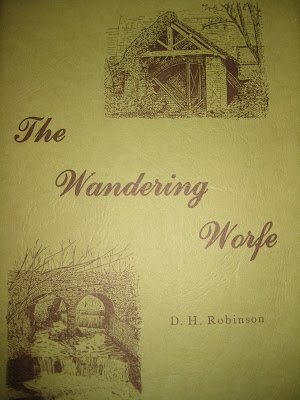 Continuing on a watery theme - I had dear old friends for the day yesterday and we reminisced about past times when we both lived near to each other in another part of the country. Now, luckily, they too have moved North so that now we only live about forty miles apart - they in The Lakes and we in The Dales - and a wonderfully scenic forty miles it is too. So we see each other frequently again. Yesterday my oldest friend was sixty so we had a celebration meal. As there was snow lying we sat by the wood-burner and chatted all afternoon, and the subject of rivers came up.

There is something about water which seems to attract us all. Maybe in the UK it is because we are an island, although I suspect that it goes deeper than that. All our settlements were originally built upon water - we needed it to cook, to drink, to wash, to wash our clothes, to keep our cattle alive, and I think that, deep in our psyche we still hold that memory.
I have spoken often about our beck here and how it had a string of mills along its banks until the end of the nineteenth century. and how the Cistercian monks walked its banks and relied on its constant flow to water their sheep, and how the Scots cattle drovers paid a half penny per head of cattle to use its waters on their way through to market. But this was not unique - this same pattern of use, certainly in the UK, could be applied to any watercourse. And I have seen similar situations where little mills are still in use in the Atlas mountains of Morocco, the Taurus mountains of Turkey, the streams on the Greek islands - man has always utilised a water source
to his advantage.
And so we got to talking about another watercourse which my friend and I both knew well. The River Worfe is a tributary of the mighty Severn river - it is a tiny little river which flows through the beautiful countryside of Shropshire - arguably England's greenest county. It has glorious walks along its banks and in years gone by we have done them all. We have spied kingfishers, herons, pied flycatchers along its banks; we once found a slow worm (the only one I have ever seen) on the footpath; and on one occasion we had a little adventure.
Strolling along on a Sunday afternoon, we happened to spot a sheep in the water, up against the bank, standing still, its head down - obviously stuck and just as obviously resigned to its fate - it had decided there was no hope and it would drown.
One of us ran along to the nearest farm while the other two or three crossed the bridge and went back to see if they could help it out of the water. Its fleece was saturated and it was very heavy indeed. Luckily the farmer was in and he came straight away and together we pulled the sheep out onto the grassy bank. We smiled yesterday as we remembered that long before we got its feet firmly on dry land it had turned its head to nibble away at the grass. These little incidents stick in the memory and make up the fabric of life for me at any rate.
My previous husband loved the river and in particular the area around a village called Rindleford, where there was a mill and a miller's house. In the time of Richard II it was a fulling mill but it eventually became a corn mill. At one time it was also used for crushing linseed for oil.
My husband painted the mill in oils and it hangs on my staircase today as a constant reminder of those happy days. I thought you would like to see the painting - in the photo above.
One man, Dr D H Robinson, made it his life's work after his retirement to write a book on this little river and it is full of most interesting little snippets of information. Here is just one story:-
One miller, who had been moved to an old person's home in the nearby town of Bridgnorth, had a son who now worked the mill and who was a notorious drunkard. When the old miller died the son went to fetch the coffin in his pony cart and then left the cart with the coffin outside the inn. He then drove home very drunk and got the card stuck in the middle of the river where the poor old miller was forced to lie in his coffin throughout the night. Rather a fitting end I think to a man who had lived all his life on that river and must have loved it.
There is something nice about sitting with old friends on a snowy day in a warm room, with a cup of tea and a wealth of old memories. Wish some of you could pop round - the kettle is always on and the teapot at the ready.
Posted by The Weaver of Grass at 02:36

Lovely painting at the start of this watery post. The subject is ever close to my heart, for what would a Piscean do without plenty of the wet stuff to swim in?

What a lovely painting and what lovely stories you tell about the river. Water is very important to us here in Oz, partly because much of the inland of our country so arid and thus water is really special.

Honestly, Weaver, you write so well... sometimes it seems as if we are sitting right there with you, teapot and all :-)

I would so like to take you up on that cup of tea and perhaps a good look of that lovely painting in the original. A delightfully chatty and charming post.

Lovely post and delightful tales of both the stuck sheep and the miller on his final journey—and a charming painting by your late first husband.

You're right about the importance of streams and the place they have long held in our lives and histories. Here in the U.S. waterways were the "roads and trails" into the vast, near-impenetrable wilderness when the first Europeans began their westward search for furs, accompanied or soon followed by the (usually) Jesuit missionaries. The various Indian tribes had, of course, had their large villages and seasonal settlements on the banks of the streams and interconnected lakes found in the Northcountry for millennia. We latecomers shaped and learned and built this nation around rivers and creeks. I can look out my window as I write and see, 25 feet away, the moving flow of a stream which played host to Shawnees and Miamis, trappers, traders, buckskinners, and explorers of all stripe, a stream where blood was shed along its banks and sometimes to mix in the actual water, where mills small and large were built, and where a city grew around not far from here because, for as long as mankind can remember and has been keeping record, rivers have indeed been our salvation and lifeblood.

Oh we definately will pop round sometime....when the snow goes! Yes, we have had enough of it now!

My eye was immediately drawn to that wonderful painting. I love the composition and bold use of complementary colours. I imagine it gives endless pleasure.

I'm looking out on a grey sleeting scene... you have made me think that it is time to put the kettle on!

Your painting is a treasure, Weaver. And I'm thinking you're a spellbinding weaver of words, as well. I was thoroughly engrossed.

What a lovely post to read at the start of what will be a busy day. A beautiful painting, the description of a good walk, a story or two and an act of mercy - perfect!

What a beautiful painting Pat - your first husband was very talented. Thankyou for sharing your memories and knowledge - I didn't know that the Worfe is a tributary of the Severn. We live not far from the first Severn Bridge. How I would love to take you up on your offer of tea and a chat. A wonderful post, as always.

I wish I could op around and have a cuppa with you!

Yes, I hear you -I have a similar thing about water since most of my childhood was spent in the SW corner of Holl. (where in 1953 the dykes broke and at least half of the province Zeeland flooded).
Your hubby should have been a painter, Weaver:) -pass the compliments to him -he has a very attractive style of naturalistic painting!

It is a lovely painting, - very special, and very good stories to go with it :-)
"Our" beck, which flows only a few metres beside the house, has also had mills along its banks, - in fact, it is called Kvernhuselva, which means Mill River. The mills themselves are long gone (they would have been wooden buildings), but we have found a couple of mill stones on the lot that we bought for our our house.

weaver i thoroughly enjoyed reading this post - right from your mention of the lovely land between the dales and the lakes and then into the gorgeous string of tales around the river. i could read books of your stories!! steven

Drawn by your lovely masthead pic of Rievaulx (used to live near Tintern, & love the poignancy and peace of these ruined abbeys), stayed to read. Glad I did! Greetings from France, Minnie.

What a wonderful post Weaver, it left me all warm and snug inside. I thought the painting was an 'old master', your first husband was a talented artist.

I loved the tale about the sheep. What a great outcome. My sister lives in Australia and they have had a drought for 6 years, but recently have had loads of rain, thankfully. She has complained that all the weeds are growing now!

Well I had a cup of cyber tea with you all - and a hot scone too. I am so glad you liked the picture, it is one of my favourites. Do take the time to read Scribe's comment below, which puts US streams into the picture beautifully. Eldrid's comment is also an interesting thought - there were mills in Norway but as they would be built of wood they have largely disappeared - I suppose the same thing applies to Canada and the US where wood is the most used indigenous material for building.
Thanks for all your comments.

That painting is a wonderful keepsake. Your afternoons sound cozy and that fire, cuppa and scone so inviting. If only!