Water, water everywhere...and lots of different names for it. 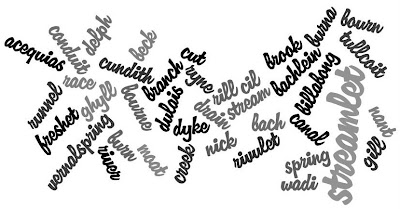 Thank you to everyone for the tremendous response. It all makes such interesting reading. I spent an hour or two looking them all up yesterday and I publish the list below with derivation where I was able to find it. I'm sure there are just as many colloquial words for watercourses that are not on this list but what an interesting exercise it has been. So here they are:-

Bach
Bachlein - these two from PIR in Austria - he thinks from the same derivation as 'beck'.
Beck - from the Norse bekki (our area of the Dales is steeped in Norse history and words).
Billabong - this from Australia of course, and a word we all know from 'Matilda'
Branch - from E Texas
Brook - from the Anglo Saxon brok.
Bourne or bourne - used mainly in the South of England and from the same root as burn.
Burn - from the Anglo Saxon burna.
Canal
Creek - this widely used in the US but originally from the Norse criki.
Cut - from the 13th c. cutten.
Dyke - Anglo Saxon originally meaning a mound but then adapted mainly for man-made dykes
(this is particularly true of Lincolnshire when the fens were drained).
Freshet
Ghyll or Gill - from the Norse gil.
Moat - from the French mote
Nick - for a salt watercourse (used in West Virginia)
Race - from the Norse ras
Rill - from 19th c German
Ryne and Rynel - both Anglo Saxon derivation
Runnel from the same source
River and Rivulet - both originally from the Latin
Run - used in the US - probably from the same source as runnel.
Stream - Anglo Saxon.
Spring and Vernal Spring - reported from US but the first also used in UK
Streamlet - Anglo Saxon.
Wadi - arabic.
In addition to those I also have Acequias (Mexico) - thanks for that addition.
Caroline at Coastcard sent me four Welsh ones:-
Nant, Tull coit,Cil and Dulais. If you wish to read more about these, she is posting today on the subject and can be found on my blog list.
Finally, three from The Netherlands - stroomje (stream), riviertje (river) and beekje (beck)
Sufficient to say that everyone came up trumps, as usual - and I really enjoyed sorting them all out. I shall now pop over to Wordles and see if I can make a wordle of them all.
PS If any more come floating in during the day today, I will add them on tonight.
STOP PRESS: More have come in over the day, several from Dutch friends and another one
from Wales:- vliet, slootm slootje, frisz, strom and afon. Thanks to everyone for participating.
Posted by The Weaver of Grass at 01:13

Of course, there is the Welsh for river - Avon. Thus the River Avon in England is river river!!!

I've been racking my brain trying to recall any local names for streams, etc., but no luck. I only know those already known by everyone else. There is a Bourne End in Bucks, not far from where I grew up, and a Winterbourne not far from where we live now. I have enjoyed reading this post and will look in again later. Happy Wordling!

Fascinating post on a fascinating subject. I have often thought what a shame it is that we do not have more names for the water itself in its different moods, the way the Inuit have names for all the different varieties of snow.

How informative! I love learning about word derivations (did you notice the word riv(e) imbedded in there?). :)

I love this post!..thanks for sharing, very interesting...

This is interesting! Many of these I was totally unaware of. Who knew there were so many?!

Here in this part of the US, "creek" is often used, but is also pronounced "crick". We have a "wet weather spring" on our property that only flows after a rain.

Where I come from, on Cape Breton it would always be a 'brook'. Here in the Northwest it is almost always 'stream' whether a trickle or a small river. Only the BIG guys are rivers!

Thanks again everyone - this discussion could run and run!

Doh! And of course it should be spelt "afon" and prounounced "avon" and not AVON as in "Avon calling" as the blardy newsreaders always seem to call it. I feel like hurling something at the screen then!

Well done indeed, Weaver, and thank you: this has been a fascinating exercise for us all. I have certainly enjoyed re-visiting childhood haunts (albeit from memory and via the world of virtual reality).

I have posted my further thoughts on the subject here: - withywindles, lizamaoos et al...

Crikey, this is great, I could count the ones I recognised on one hand.

Parts of the U.S. used to say 'crick' as in "if the crick don't rise, I'll tell you another story tomorrow."--Hart

This was very interesting reading, especially that there are so many words of Norse origin that we do not use here in Norway (creek, gill, race).
Our most common word is "elv", which can be of all sizes. A "bekk" would be a smaller "elv", - how small would depend on what would be considered large or small in the particular area. Then we have "å", "løk", "sig", "sik", "sikle"(very small), "grøft" (in my understanding, this would have been man made), "renne".

The only creek I know Weaver is shit creek.

What a great exercise in language - fun and informative.
I've remembered another -mere (lake), a lake that is broad in relation to its depth . It is used often when people name their properties ( large landholdings for raising cattle or sheep in Oz) as in "Broadmere" or "Gracemere".
Now there's another exercise in language for us -farm, station, property in Oz, ranch in USA etc
Cheers
Helen

Fascinating! We have a beck running through the village, infact it runs at the bottom of our garden!We can always tell how much rain we have had by the height of the water!

It's late in the piece, Weaver but I want to make an Australian contribution, How about Billabong?

Defined online in the free dictionary as 1. A dead-end channel extending from the main stream of a river.
2. A streambed filled with water only in the rainy season.
3. A stagnant pool or backwater.

What a fun project, full of words and fresh meanings. Thanks.

What an interesting exercise this has been. I have enjoyed reading contributions from world languages old and new.

What an amazing list of names for a beck! An interesting post Weaver. The foreign ones are fun.

This is really a very interesting post! It made me think about our Polish words for river bodies, and there are many... not sure if you are interested, but I'll share anyway :)
The main word for river is rzeka [pronounced something like zheh-kah]. A smaller river - rzeczka, and then a tiny one - rzeczułka ("ł" being a special Polish character pronounced like the English "w").
A stream would be strumień (another Polish character here), smaller ones would be strumyk and strumyczek. These all would be rather slow streams. If there is a stream in the mountains, running down, jumping on the rocks - it is potok.
So - there you have it, a Polish contribution :)