For many years now I have collected hares, which are my favourite animal.   I think this goes back to my childhood in rural Lincolnshire, where hares were so common in the flatlands.   I have hare statues, hares pictures and dozens of hare cards.   These cards I keep until I have enough to make another collage, then I buy another clip frame and mount the cards.   The farmer then sighs heavily and says, 'Another nail in the wall.'   Our utility room is hung with hare pictures and I have enough for another collage when I get round to doing it.

Now, one of the best things about blogging is the nice relationships one gets with folk - I have met a few and got on well with them all (I feel this is because we are attracted to like-minded bloggers).   But there of course many more who, although we communicate almost every day, we are unlikely ever to meet.   But in a strange sort of way we still get to know one another.

Such a one is Gayle (angry parsnip/two little square black dogs) who lives in Tucson.   And just look what arrived in the post from her this morning.   Certainly this jack-rabbit has ears bigger than any hare I have got so far!   Isn't he splendid? 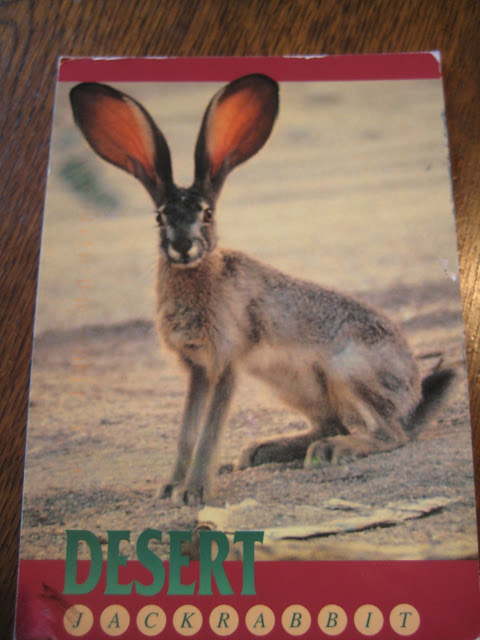 So I publish him on my blog and say thank-you to Gayle for thinking of me and giving me the pleasure of a lovely surprise when I opened the mail this morning.
Posted by The Weaver of Grass at 10:25

You realise that you will be inundated with hare cards now Pat. Here on Sheppey we have a good population of hares and at Elmley NNR they even have a hare hide which you can hire to photograph them.

Oh Pat, they have jackrabbits in the southwestern US and they are big. I remember flying into Texas once and I saw jackrabbits on the tarmac and fields. That was a sweet thing for Parsnip to do. Just don't know the difference between hares and rabbits. On my farm there are cottontails.

I know how the farmer feels, my wife collects them as well. There is not a room that doesn't have at least one or more.

I am trying not to collect hares! I already have one or two ornaments and pictures as well as umpteen cards and a few books. We had hares breeding in our paddock at the back of the last house we lived in. Our labrador found a leveret in the grass one day - the leveret screamed at him and I pulled him away, though he wouldn't have hurt it. I don't think I have seen a hare since we moved here. Sad.

I am so happy you liked it.
We have many strange critters in the desert.
And their ears are that huge.
Better to hear the coyote, fox, bobcat or mountain lion coming for dinner.

He is a doozy! Big ears for heat exchange in the desert.

Aren't Jack Rabbits amazing animals. I do like Parsnip's explanation for those big ears.

I've never seen a Jack Rabbit, but have been lucky to have seen some hare moving quickly across some fields in past years' UK visits. I loved being able to spot the static, sitting hare (with help from wise UK friends) and then to see the animals spring into action. Quite a moment for this city person.

Perhaps you have some of my friend Celia Hart's artwork amongst your cards? If not, I could remedy that lack. xo

I also collect hares and rabbits. They're kind of a personal totem of mine and I think they bring me luck. How nice of Parsnip to send you that one!

On a recent frosty moonlit early morning, I was watching a Hare munching on grass outside our kitchen window. When he eventually saw me he went off like a rocket! Lovely creatures.

I hope you're not attracted to hares because they are like-minded individuals, as many are more than mad; they're crazy! I once had one that came bounding straight for me when I was out walking. It stopped about four feet away from me and sat there looking very puzzled for a long 30 seconds before it realised it was doing something wrong and loped off apologetically into the long grass.

Do you know about the hare preservation trust? I'm a member they do great work trying to improve hare conservation. There aren't many hares left these days in certain parts of the UK. They were hit hard by an agri chemical sprayed onto fields which got on their paws and burnt, so they would lick it off, ingest it and die. Beautiful creatures. I've been lucky and seen three this summer. I used to watch them box up on the Chalk. X

It's interesting to see a little glimpse of another fellow blogger. What a lovely gift.

What a magnificent picture! I also collect rabbits and sometimes have them given to me (often garden statuary). We were lucky enough to see a jack rabbit in our own driveway one time. It had incredibly long legs and when it took off, it covered a huge distance with each bound. Mostly we see little cottontails.-Jenn

I sometimes flush hares when I'm running or cycling on trails. They don't expend more energy than they need to just draw away, no matter the speed at which you are travelling.

I shall never see another hare or rabbit without thinking of you! What a lovely surprise to come in the post.

We have lots of hares here. Seeing is believing. They breed like rabbits, or even faster I believe. My grandmother on my father's side won the Waterloo Cup in the 1940s. We had it on the mantelpiece. My family were Fenland farmers you see and coursing was a way of life. They also loved dogs and bred for coursing.

Thank you so much for all that super information - I shall certainly join the trust Countryside Tales and have just e mailed them for information. Thankfully Rachel I think that Coursing is illegal now although I expect it still takes place. Derek has sent me the most marvellous photograph - I am e mailing the photographer to ask permission to print it for you to see. Thanks to everyone for joining in.

Pat, the hunting of hares with dogs was banned as part of the Hunting Act 2004.
Unfortunately illegal hare coursing still takes place throughout many parts of the countryside and certainly around where I live in Kent.

That was a lovely surprise present.

Good grief - that is a fine set of ears! Much larger than the local hares.