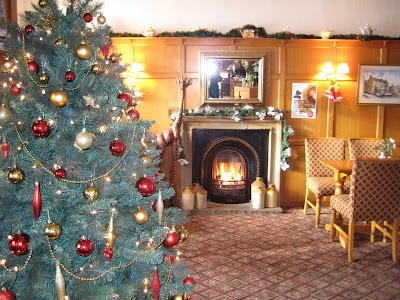 I often wonder which of our senses is the most important. Also - which of our senses has the most power to recreate the past? I know that I never smell Dettol without being transported back to the delivery room of the maternity hospital; also various pieces of music transport me back to occasions in the past. Perhaps the answer to these questions is that it is an individual thing. To some of us a sense of smell is the most significant, to others taste, or hearing, or touch. And, of course, it goes with out saying that if we lose - or partially lose - one of our senses then the others become more pronounced.

Yesterday, reading the cookery page in one of the Saturday magazines, there was a photograph of a Carraway seed cake. That photograph immediately invoked the smell of carraway seeds, the taste of Sunday school anniversary tea, I think every single sense was involved in one way or another.

Our Sunday school anniversary occurred in early June in the village where I lived as a child - a village in the Lincolnshire Fens. For weeks before hand each one of us children learned a poem off by heart so that on Anniversary Sunday we could stand up and recite our poem to a packed congregation in the chapel. But on the Saturday before that Sunday we had the Anniversary party - we rode round the village in a big cart pulled by a couple of cart horses and we sang our anniversary songs. And while we were doing this our Mums got the anniversary tea ready. The tea was always the same every year:- white bread and potted beef sandwiches, Lincolnshire plum bread, fairy cakes and carraway seed cake. I can taste that carraway seed cake still, although I don't think I have had a slice in the last fifty years.

Yesterday morning we went into The Golden Lion - our favourite pub - for our morning coffee. There was a blazing fire, the Christmas tree was lit and there was a smell of baking mince pies. Even blindfolded I would have know it was coming up to Christmas from the lovely smell!

And while we are on the subject of food - there was a queue down the road from our local pet shop yesterday - everyone was buying food for the wild birds. We have doubled the amount we are putting out - suet, sultanas, oats, sunflower hearts, niger seed, peanuts, mixed bird seed, fat balls, kitchen scraps - and it is disappearing like magic.

Just up the lane our local little owl spends most of the day sitting on a post at the side of the lane, close to where there is (or rather was) a road-kill rabbit. For the past few days he seems to have dined well on that. I did try to persuade the farmer to shoot a couple of rabbits and bring them up and put them by the owl's gate post so that he had an instant larder, but am not sure about the ethics of that really. Should the life of a little owl be more important than the life of a rabbit?

Keep warm in this bitter weather - eat well - sit by the fire - and if there is anything cooking enjoy the smell.
Posted by The Weaver of Grass at 03:01

I once read that the smell part of the brain is near the memory part - a reason why smells bring back memories don't you think Pat? Not sure where I heard it/read it or was it just a dream? lol! Keeping warm here - awaiting hubby's return from the workshop then we can tuck into some leek and patato soup I made this morning I made enough for an army! lol! Take care Pat Love Dxx

ahh weaver - i love all food - except brussell sprouts - and i have many many happy associations with all sorts. it's a magic repository of happiness that's easily tapped into. steaming christmas pudding sets my head and tummy off on wild taste and scent associated memory tangents!!! keep warm and thanks for taking care of the little ones outside. steven

I saw that article on seed-cake too, Weaver. It made me want to make one - I haven't had one since I was a kid, and we always had it in the house then, like the Victorians did. I think you should let the owl fend for itself, otherwise you will be damaging all the inherited survival skills that it would pass onto it's own young - nothing to do with morals, those are a human invention.

You are right, I think: the primacy of senses is an individual thing. And it varies for individuals too, depending on the circumstances or occasion. An absorbing post which of itself brought back many memories - all good, as it happened. Thanks for that.

My mouth is watering after reading that post! I'm going to have to quickly butter a slice of bread.

Yesterday I was walking past one of the ubiquitous Xmas markets that have sprung up all over Vienna. The smells of cakes and wine and so so was quite overwhelming. There was a queue of 50 people waiting to use the WC. Another smell, but maybe not so good!
Yes I think that's right what Mrs Nesbitt says about our memories basically being housed in different parts of the brain according to which sense is involved but there's also a bit of overlap e.g. as with colour and movement. And so as Steven says we go off at tangents.

I share similar memories whenever I smell Dettol. It must be our age!! No wonder the Golden Lion is your favourite pub Pat - it looks so cosy and welcoming. The smell of warm tar takes me back to childhood and road repairs outside our school. Sooty smells remind me of my granny who was always having chimney fires. Seed cake was very popular years ago - perhaps it isn't sweet or sticky enough for today's palates. The birds are waiting for my husband if he is a little late with their breakfast - it is quite obvious some mornings.

Food, glorious food! The smell is sometimes just as enjoyable as the taste. May yours all be pleasurable as we enter the holidays.

My dad hated seedy cake (as he called it) so we never had it.

On the owl/rabbit question. There are LOADS more rabbits than owls so it was a good call!

I'm trying to imagine what a seed cake might taste like - may have to look for an old recipe and make one.
Smell always does it for me - chalk dust, candied almonds, coffee, cinnamon - all conjure up memories.

I WANT TO GO TO THE GOLDEN LION! NOW!

Oooh Dettol,it takes me back! Love the smell!
And my Grandma's beef tea!! Wow!

I'm always encouraging the children to use the senses
in their creative writing ..it makes all the difference!!

Your Lincolnshire Plum Bread took me back to visits to my Lincolnshire Grandma. Along with memories of curd tart and the herby smell of Lincolnshire sausages. I still have one of her vegetable dishes that used to hold runner beans or new potatoes from her garden.

Today I opened up a new bale of hay that smelled like the essence of summer.

My 30 days of Christmas consists of cooking a single batch of cookies every (or every other) day until Christmas.

We no longer do presents, but cookies are all I need to remember Christmas Past.

I still can't imagine Christmas without my mother's Bing Crosby album playing in the background, though.

Lovely post and I would adore a Golden Lion near me.
Christmas smells are the best.
I must look up a seed cake recipe, I have read about them but never had any.
The only one that I can think of is my Mother's Polish Poppy Seed Cake that was more of a yeasty slightly sweet bread/cake she made at Easter.
I miss my Mum !

Take care and I hope you are well

I've been told before that my house smells like "home" - one of the finest compliments I've ever received!

Oh my!
I was just writing you a comment and my electricity went out!! It's back on now!
I just wanted to tell you that I'm taking care of our feathered friends here in Chicago. The snow is rather high so I've been outside cleaning the feeders and leaving extra suet out. Hope all is well in your neck of the woods!

The Golden Lion sounds so delightful. I want to visit!

Beautiful pub shot. Nicely done.
Your header is wonderful. We've had ankle-deep snow, and -6 C. and it's a bit cold. It doesn't smell much of cold. I baked a meatloaf from local bison to improve indoors.

But I love it! I trekked all about looking for animal prints in the snow. Delightful time of year!

The smell of cigar smoke mingled with tangerines is my memory of Christmas afternoon at home as a boy.
Keep that stove burning.
...Tramp

Oh how I wish all twenty of you could meet with me in The golden Lion for a glass of hot punch and a hot mince pie - and a carol round the Christmas tree. Wouldn't it be lovely?