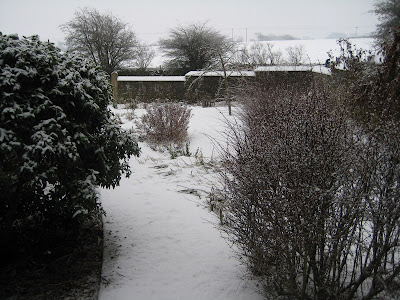 well - the celebrations are over for a little while - until New Year's Eve anyway. Yesterday nine family and friends had a pleasant day eating and sitting by the fire. Luckily this year the celebrations were just right for the lady who cleans for me and she came this morning, so everything is all ready for New Year's Eve. The farmer has gone off shooting (well, beating as he doesn't care for killing things) with the synidicate, taking with him turkey and stuffing sandwiches and a flask of coffee and rum. So I have a quiet day to myself.

It is snowing. Heavily. It has been snowing since before we got up this morning and the sky looks heavy with more snow. Depending upon whom you speak to the snow was forecast, or it was meant to precede rain coming in on a warm front from the West, it would turn to rain later, the isobars were getting closer together so we might have wind later in the week. And so it goes on. Which leads me to the Alexander Pope quotation which I start as a title for this piece. Here is the first little bit of it:-

A little learning is a dang'rous thing;
Drink deep, or taste not the Pierian spring:
There shallow draughts intoxicate the brain,
And drinking largely sobers up again.

I have encountered this 'little learning' in my recent illness, where well-meaning friends have 'counselled' me, told me of people they have know with the same condition, discussed possible outcomes - my head has been filled with these little learnings. Now I am going to see a Neurologist - bit more learning there methinks - so I intend to listen to what he has to say.

But over the last twenty years or so, nowhere has this little learning come more into play than with the weather. We see a forecast every few hours on television, where they talk about fronts, jet streams, isobars, blocks of cold air, blocks of warm air. We all become mini-forecasters in our own right.

But I do sometimes wonder whether the farmer, with his lifetime of being outdoors and seeing the signs, is more accurate. If the sky is black over Zebra Hill, which lies North West out of our kitchen window, then sure as eggs are eggs, it is going to rain - and soon. And if he comes in and says he can smell rain on the wind - then it is going to rain. If the sky is red in the morning then that is a shepherd's warning and there is bad weather about. Similarly, if the sky is red at night then it is the shepherd's delight and the weather is settled for a few days to come. I could go on. But sufficient to say that my New Year resolutions will include one along the lines of leaving things to the experts.

On the subject of snow, Paul Simons in The Times (an expert on weather if ever there was one) says today that the reason we are so overcome by cold here is because we do not take precautions early enough. Apparently in Siberia, where temperatures in Yakutsk regularly reach minus 71 he says they take the cold far more seriously than we do and begin to wrap up well when the temperature is 10. Extra layers, thicker gloves and hats, heating 24 hours a day, triple glazing on the windows. Actually, thinking about minus 71 has made me feel considerably warmer and cosier here in North Yorkshire!

Keep warm and cosy as you prepare for the old year to depart and a new one to come in.
Posted by The Weaver of Grass at 02:36

On 'a little learning', one of my German friends said that he was curious about some small ailment he had, so consulted a medical dictionary. As he started to read it, he found that he seemed to be displaying most of the symptoms described in every section, and by the time he finished, he could not understand how it could be that he was still alive. It's funny how we humans can switch from "it could never happen to me" to "why hasn't happened to me yet?" without any obvious change in thought patterns!

I've always wondered who it was who first said that, so thanks Weaver. The older I get the more I realise how little I know.

How lovely to have a quiet day to yourself, and a clean house to boot!

Indeed - the weather Pat eh? Sitting here, warm in the snug, surrounded by a husband and two dogs, all fed up with the snow and what do I see outside? Yes - those dark clouds bringing more snow!

I don't envy the Farmer traipsing through the fields - except perhaps for the coffee and rum! Snow here too, so everything looks freshly white. Stay warm!

Anyone for a holiday in Yakutsk this year? No, methinks!

Not snowing here but more predicted. A kind of sleety rain at the moment.

weaver - it's minus twenty c outside today, there's fifteen to twenty cm of snow on the ground and i'll be heading out for a walk later. i consult the weather widget but really, sticking my face out the door tells me more about what i really need to know than any widget ever could. enjoy your quiet alone day. they are so very good aren't they!! steven

We have the same saying here, but with sailors instead of shepherds. My dad can always predict rain by how the seagulls fly - when they circle, rain is coming. Works like a charm.

I leave it to the experts, especially medical ones. It seems that the weather changes according to the channels we watch on TV. Some are full of dramatic forecasts and others more rational. Do hope your visit to the neurologist goes well.

Your day sounds really lovely. Clean house and time for ones self.

Farmers and sailors know how to read the weather... so much depends on it.

Stay warm and safe, Weaver. Happy Christmas season to you as well.

Although we do get the cold and the snow here, in Canada, I don't think we are ever really ready for it (at least we never stop talking about it once it starts).

I like the idea of bringing a thermos of coffee and rum to keep warm! Have a wonderful day to yourself!

I must say I love snow.
My father used to get a headache and say it was going to snow......the winds reaching Essex from the steppes of Siberia
or some romantic notion.

Never, never, look anything medical up on the computer
it will just make you quite insane.
Blizzard here yesterday, very nasty indeed out.
Happy New Year to you and the farmer.

It seems an illness or pregnancy seems to bring horror stories more than sympathy from those around you. Not always welcome and usually too much bad information. I hope you can find solutions to your problems soon and be on the mend.

Stay warm and enjoy your day!

Excellent advice about wrapping up and preparedness for the cold. Sleet and a slight thaw today sees our side road peeping through the ice for the first time in a LONG time. Great, thoughtful post

It's good to listen to the doctors, but also to yourself. Know one knows you as well as you, yourself. Doctors are good and what would we do without them, but only we know how and what we really feel. I have to return to my doctor for a periodic bout of extreme coughing still undiagnosed -- after two years. Scared my kids to death this Christmas.

Oh, so right, Pat. I'd listen to the testimony of a man whose occupation during decades had him out of doors under graphic skies over some over-qualified nerd watching a computer screen in a university basement any day! In fact, you'd be doing a great service to all your readers in the north-west if you posted a regular summary of what he'd discerned on the way to and the way back from milking!

PS Quite right too about listening only to your doctor. God knows they're far from infallible, but at least you can interrogate them and provided they have the patience and care for the individual patient that should come with the post, you'll get the condition profile you're after. The best tip is: avoid the Internet! It was my downfall when I was diagnosed with sarcoidosis.

I hope all goes well with the consultation, Pat. A brush with something serious shakes your overall health confidence to the core, doesn't it?

Even the THOUGHT of -71° makes me shiver...and I'm the first to admit, I know practically nothing about anything...

Oh yes - we all seem to have been there - read the dictionary, talked to friends, gone on the internet - ended up with brain tumours or the like.

I am studiously avoiding anything until i have been to the Neurologist - he will certainly know more than I do about it and I hope will not try to pull the wool over my eyes!

Happy healthy new year to you all.

I do like Gerard Manley Hopkins. But not into genealogy. -- tho my sister has sent me bunches of photos and info, but I haven't done anything with them. Too much work. I barely have enough time to do all my other 'stuff'.