Fitting our families into history. 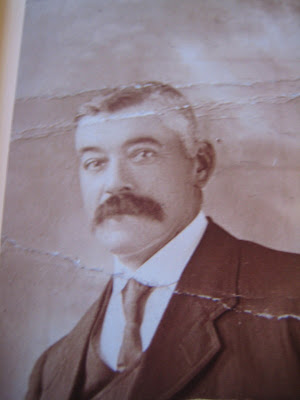 When the poet, Gerard Manley Hopkins, had to have some poplar trees felled he wrote -"after-comers cannot guess the beauty been." As the farmer and I drove past the ancient ruin of Bolton Castle here in Wensleydale - a castle at the height of its powers during the time of Mary Queen of Scots - I thought of that quote and of the fact that the castle still belongs to the Lords Bolton. It is still a magnificent building but what must it have looked like in its heyday?

Then, in one of Santas's most welcome gifts, I read a comment by Owen Sheers to the effect that the shared experiences of the generations ultimately helps us with knowledge of ourselves. And it seemed to me that these were all very good reasons to be interested in Family History.

The Family History bug only seems to bite as one gets older; that certainly appears to be true for my family at any rate. Maybe it is only when we reach - and pass - that point where more of our life lies behind us than in front of us that we feel the urge to establish our place in the giant scheme of things. Does this make sense for you too?

The chap in the photograph above is my maternal grandfather, William Everton, always known as Darkie. He has appeared on here before because he was quite an important influence on my very early life - I simply adored him and the feeling was mutual. Born in 1862 he was seventy when I was born but I remember him so well. He was a tall, stately figure, full of humour and always sucking mint imperials because in retirement he lived with his youngest son and his wife, who were Total Abstainer Methodists and Darkie liked a drink.

He would only have attended school until the age of twelve at the most and then would often have been absent during busy farming times. Reading and writing were always hard work for him and when he finally rose to the position of Station Master on the Railways, my grandmother did most of his book work for him.

The previous generation, Darkie's parents, are of course only names on a family tree to me, but I know a little about them - when and where they were born, how many children they had, how many of those children survived, what jobs they did, when they married - and where (this was often governed by where the woman was in service). There was also some anecdote from my mother over the years before she died.

And isn't this how so much is handed down? It might not be absolutely accurate (apart from the fact that it is a wise child that knows its own father) but it is all part of that rich patchwork of knowledge that leads us to establish just where we fit into things.

This has surely been even more true for the previous generations to ours, when social mobility was so much less. Up to my generation all my family were born and lived their entire lives in Lincolnshire.

The farmer's family originated in Dent, which is twenty five miles away from here, where the churchyard is full of Thistlethwaites. The farmer himself was born in the house where we now live and has never lived anywhere else.

Two years ago our village was contacted by some very distant relations who now lived in Australia - and you can't get further away than that - to see if there were still family in our village. Well here we are - and we are in contact now - and in fact they are reading my blog - so if you read this J, then a happy new year to you all - the family is alive and well here in the Yorkshire Dales as it always has been. And knowing that some of that family now live on the other side of the world has added a new rich strand to their history.
Posted by The Weaver of Grass at 07:05

weaver - it's so rewarding to dig into family history. of course alongside the discoveries, you sometimes come across less savoury subject matter but that's part of the colour! keep digging! steven

My dad enjoys delving into family history and we are the beneficiaries of that interest. We too were contacted by relations - from Hawaii! The family 'stamp' was still visible and we all laughed at the deep resemblance across the generations.

what a co-incidence, my maternal grandfather was a stationmaster too, his surname was Train and his son (my grandfather) married a Miss Driver. Thankfully they didn't take a double barrelled surname! Family histories are fascinating...

oh and thanks for your comment on my blog about River of Stones, yes anyome can participate, you can find out more at: http://ariverofstones.blogspot.com. It starts the day after tomorrow! It would be great to join you there!

It's true what you say about the older end getting interested. My mum, 90, is fascinated by all this. Myself, younger, less so.

On the Guardian website they say that 1 in 6 Brits now living will reach 100 yrs of age. Women live longer. So maybe it'll average out at 1 in 3 women but only 1 in 12 men?

Family history is, indeed, rewarding. Immediately after my retirement, I spent several years researching and writing a book on the Gaelic history of my father's side of the family. It gave me a greater sense of history in general, and it made me aware of the fact that I belong to something much larger, and much more complex, than the immediate family I knew as a child.

What a fascinating post Pat and what lovely eyes Darkie had. My father had two male cousins who went to Australia but his family were not good at keeping in touch. My maternal grandfather worked for the railway too, but was a clerk or maybe something senior at Liverpool Street Station in London. There are so many questions I should have asked my parents and grandparents and I find I can't remember as much as I would like.

I too enjoy researching family history. My grandfather journeyed to England and Scotland while doing his research and found distant relatives there. He really enjoyed this pursuit and shared with me the fruits of his labours. I'm glad you are enjoying this opportunity!

You illustrate perfectly why I feel such a connection to Scotland. So much of myself is there.

Yes, facinating, rewarding, and often frustrating sort of detective work in researching family history. The internet has certainly made things considerably easier though. Finding the way around seeming dead ends can be very satisfying. Discovering certain 'hidden' secrets that the elders never talked about can be surprising. But - *very* time consuming. ATB!

He looks like a kind man, it may be in the genes!

This sort of thing is invariably fascinating to me. Wonerfully well written. Grand post.

Your grandpa Darkie looks like a most memorable character, Weaver.

Happy new year to you and the Farmer and all best wishes for much health and happiness!

Hello Weaver, what an interesting post. I agree with you, as we get older, where we fit in the scheme of things is more important to us. My oldest son has been very busy compiling our family tree and he has found out some wonderful and some sad history along the way. How lovely that you remember your Grandfather so well. I remember both of mine too, particularly my maternal Granddad. I loved him dearly and his deep, resonant voice and strong Yorkshire accent.