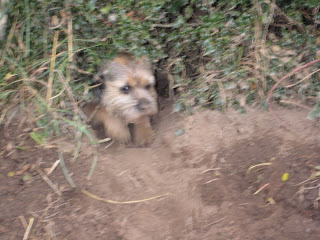 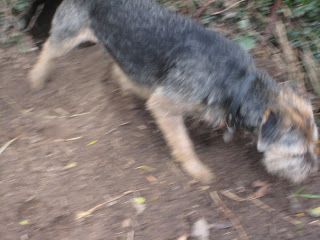 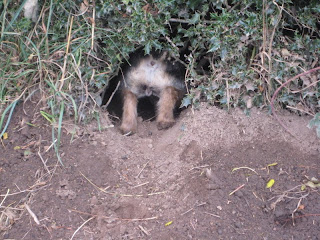 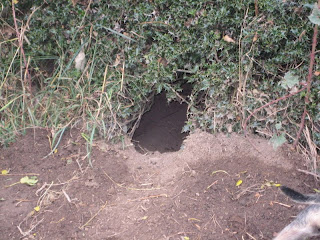 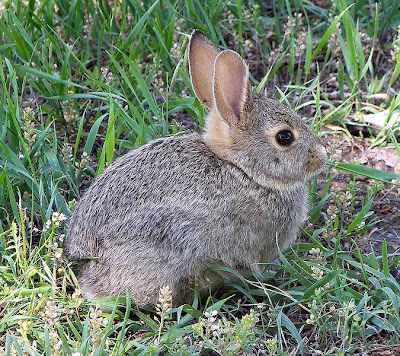 I wonder why it is traditional to say, "Rabbits!" early on the first day of each month. Does anybody know the answer to that question? I must say that I always say it as soon as I remember it is the first of the month.

I can't think there is a person in the whole of the UK who does not know what a rabbit looks like. They are so common that everyone has seen at least one in their lifetime. Most of us, particularly country-dwellers, have seen thousands if not tens of thousands of the creatures.

As to what we think of them - well opinions differ. Writers like Lewis Carroll, Douglas Adams and Beatrix Potter have anthropomorphised them into dear little creatures. Then there is the wily Brer Rabbit, who always gets the better of his opponents. But in 'real life' they are often the bane of farmer's lives - it is said that ten rabbits can eat as much grass as one cow, and in times when grass is scarce they become a nuisance.

Now and again the farmer invites a man with a gun to go around our fields at dusk and try to clear out some of the rabbits. The phrase "breeding like rabbits" is no idle phrase. If you have half a dozen in a warren at the beginning of the Summer, by the end of Autumn you will be counting them in hundreds unless something catches them. They have plenty of predators.

Our fields this year are riddled with rabbits. Every hedgerow has a continuous stream of rabbit holes and there are one or two warrens - one in the wood, one along the side of a field, where there a large concentrations of them. It is no accident that we seem to have recently acquired a resident buzzard - for the buzzard's favourite food is said to be rabbit. When the shooting party went round looking for pheasant on Saturday they saw a fox in the distance. Foxes are pretty partial to rabbit for lunch too.

Some years ago I came across a phenomenon that I had heard about but never seen. At the bottom of the farm yard is a gate into the pasture. As I stood there I heard a high-pitched scream and when I looked over the gate I saw a rabbit frozen with fear, mesmerised by a stoat a few yards away. I clapped my hands and both disappeared, but judging by the size of our rabbit holes this year, a stoat would have no difficulty in sneaking down one to snatch a rabbit as it slept.

But there is one "person" to whom the word 'rabbit' is a signal for sheer ecstasy. I took the photographs above on our walk this afternoon. What she would do if she actually caught one I really don't know, but boy, does she like trying.
Posted by The Weaver of Grass at 07:41

We say 'white rabbits' in our house. Not sure what the difference is. Of course down in Cornwall you mustn't mention them because the tin miners think they're bad luck.....

I've never heard of the rabbits on the first of the month saying. I'm intrigued!

Tess is just adorable. This Tess feels a certain connection to your Tess.

When I first moved into my home and before the rattlesnakes fencing was put up, the bunnies would squeeze through the iron fencing to nibble the grass. Now they can only look and dream.
I would look outside and see Watson, my older Scottie, just sitting and looking at a bunny who would be sitting on the other side of the fence looking back. After several minutes they would just get up and leave.
A moment of zen ?
I just saw this again yesterday.

I am very interested to find out why you say Rabbits" on the first day of the month.

I've never heard of this tradition of saying "rabbits" on the first day of the month. Is this an English thing? My mother is from England, I must ask her about it. I live in the middle of a huge city and the rabbits are even here, they come every evening and eat our grass. It's driving my husband nuts.

I know rabbits can be plentiful - and alter a garden in very little time. But they are beautiful. We had them as pets when we were kids so of course I got one for my kids also. Turned out to be the rabbit from hell. Had him house trained, but he ate the woodwork. Put him in the garage - he ate the drywall. Put him out in the yard - he dug tunnels.

Perhaps I needed Tess to distract him.

I don't know the origin of saying 'rabbits'. Maybe it is just another English eccentricity. The photos of Tess down the rabbit holes are delightful. She is adorable and I can sense her excitement. I know rabbits are a pest to many farmers and gardeners but they are such appealing animals to look at.

Oh, I do love these pictures! That look on her face is so familiar to me. Apple has the same one when she's after chipmunks. I keep trying to remember to say "rabbits, rabbits", but always seem to forget. I'm planning now for December 1st. Wish me luck!

sorry, I tried to copy your header, but it doesn't work (I have a new computer, so it may be my ignorance of some new things added to this program!),
so here's my email Jeannette(dot)Coevorden1(at)yahoo
(dot)com
Thanks so much for sending it!

Great new photo on your header. I've never heard of the custom of saying rabbit on the first of each month. Rather cute though. What is a stoat? (I guess you can tell I'm not British, though ancestry goes back to Britain and Scotland)

It is pretty much illegal to say the word 'rabbits' on the Isle of Portland in Dorset, UK (where the stone comes from). I don't know why.

It is odd how people do not distinguich between hares and rabbits, in literature, what normally is referred to as a rabbit, is usually a hare. The so called Easter Bunny is a hare as well. I suppose the English call them bunnies because that invokes something soft and fluffy.

In Australia the rabbit is and enormous pest whereas the hare we do not mind at all, they rarely breed to excess.

So far rabbits have left us alone up here, but in Victoria they have become a terrible problem - and foolish people want to catch them by the hundreds and sterilize them and then let them go.
Honestly!

Looking at your photographs I didn't think you'd be able to match them with the text, but you did. (I can remember when they said the rabbit population of these isles was doomed!) Lovely post

I herold from a "white rabbit" family.
We have no wild rabbits over here but there are more hares in the fields than I ever remember growing up in East Anglia. It was popular to rear rabbits at home for food during the communist era here as there was often shortages of meat in the shops and many families in villages also kept chickens and pigs. These animals were killed off for meat as the winter progressed and food for them (and the people) was harder to come by. It was a necessity of those hard times but maybe we over rely on the readily-available food supply in the supermarkets.
...Tramp

I only recently hear d about the tradition of rabbit rabbit rabbit. Wikepedia has an article on it here: http://en.wikipedia.org/wiki/Rabbit_rabbit. Apparently it is something to do with the sacred hare and people wanting to invoke the hare without mentioning its name.

Rabbits must be a real nuisance for farmers but imagine what our predators would do without rabbits!

I must say I'm glad that Tess didn't catch a rabbit...

There are a lot of very wet rabbits about today - not that that worried Tess - she likes 'em wet, dry, large, small, dead, alive - any which way. What she would do if she actually caught one I don't know - I will let you know when the occasion arises.

Thanks for your comments.

I've never hear that about the "rabbits" saying, but I shall begin saying it from now on. (That sentence had a distinct aura of deja vu about it!)

I love rabbits and your photos are wonderful.

Whenever Titus runs one down, it's always died of shock before he does anything. He's never drawn blood on one yet, as far as I can see, but dead they are.

White rabbits for us here.

Just adorable. Unfortunately, my cat likes to eat ours. We're one down. But I hear they procreate like rabbits. Tess is adorable.

I remember a teacher of mine telling us about saying "white rabbit" at the beginning of each month. I never did understand why. For some reason I thought it was an Asian tradition meant to bring good luck.

There are soooo many rabbits in Britain. I don't understand why the meat is not sold in supermarkets. You can buy rabbit at farm shops but that's it. Very strange.