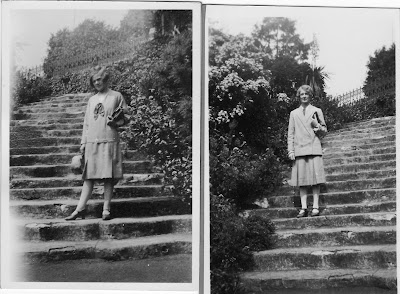 I read in today's Times that the "old school" of Savile Row tailors are cross because newcomers are moving in to that prestigious address and making much cheaper bespoke suits and still using the name Savile Row. Here in the UK the name Savile Row shouts "quality", "money" - my goodness me you are certainly deemed "posh" if you can splurge three thousand pounds on a bespoke - made-to-measure-suit of the finest material. Now these upstarts are flogging their so-called bespoke suits for five hundred pounds! What is the world coming to I hear you ask.
Time was when what we used to call "off the peg" suits for men were only available to those who were absolutely standard size (whatever that was) - no long arms, short legs or other quirks of the human male body were catered for. If you had any of those you had to go to a High Street tailors and get measured. That brings me neatly to my aunts. I have talked about them before but I make no apology for talking about them again - they were a huge chunk of my childhood.

Aunts Nell and Ruth we born on the turn of the twentieth century. They never married, suffering the fate of so many young women of that era, when the First World War took young eligible men away forever. They were both apprenticed to a tailors at the age of fourteen and they worked the whole of their lives in the same small enclave. It was my favourite place to visit in the forties when I was a small child and they ruled the workroom. Let me describe that shop to you.
Hayes the tailors was in Lincoln. It was a double-fronted shop on one of the main streets in the city. It was discreet. Mr Hayes, the proprietor, always immaculate in a bespoke suit (of course) would stand in the shop waiting for clients (never customers). His suit would be a grey pinstripe with matching waitcoat; jacket and waistcoat never removed, even on the hottest day.And round his neck would be his tell-tale trademark - a tape measure.
Gentlemen - and ladies too if they wished to purchase a tailor-made suit - would be ushered discreetly into the holy of holies at the back of the downstairs shop, where with measure and sharpened pencil and monogrammed notebook Mr Hayes would take all the measurements. Bales of expensive cloth would fill the shelves and some time would be taken in choosing the perfect material for the job. Then the client would be ushered out and asked to return in three weeks for the first fitting. It was then that Nell and Ruth came into their own. The measurements and the chosen cloth - usually fine worsted - would be sent "upstairs".
The workroom spanned the full length of the shop and had a view up and down the street through two large uncurtained bay windows. It was always very light in there even on the dullest day. Long tressle tables almost filled the room. A row of tailors' dummies stood along one side with clients names pinned to them and suits in various stages of assembly adorned them.
But the real draw for me, especially in Winter, was the always huge fire burning in the grate. On the hearth stood an assortment of flat irons, all of which had to be heated on the trivets over the fire before being used to press each tiny bit of sewing. There was usually a kettle boiling too and a teapot standing ready in the hearth, for Nell and Ruth - both pin thin - seemed to survive on a diet of strong tea.
That they were the bosses, that they ruled Mr Hayes, I have not a shadow of doubt. And I suppose the satisfaction of dressing so many smart men of that era was their reason for living. Outside of work they seemed to have little private life. They would walk through the park on a Saturday afternoon, wearing their own bespoke suits. On Sundays they would usually come to tea at our house.
They retired in their sixties and Nell died shortly afterwards. Ruth survived a good few years after that. I don't suppose a single suit they made survives now. Although if you happen to be in a charity shop in that area you could have a discreet peep inside the jacket, just under that vital inside pocket, to see if there is a label, marked Hayes. Bespoke Tailors, Lincoln.
Posted by The Weaver of Grass at 06:14

I always love your family stories. You have such vivid and precise details that England comes flooding back to me.
Perhaps you should gather them into a short book and have it printed up for your family and made available to your admirers on the web?
Just an idea. I'd buy one!

Oh my, what a wonderful story. You could write an entire novel from these delicious memories! I could just see that fire blazing in the workroom on a winter morning. I do wish I could go in and order a suit of my very own!

We are always encouraging you to publish.... your stories are so vivid and full of imagery. This story reminded me of my Great Grandmother Elizabeth (McCutcheon) Muir, who I would have known when I was little. She had her own tailoring shop in Motherwell, Scotland. The time frame would have been roughly the same as your Aunts. After WW2 she sold up, went to Australia and came to Canada, where she passed away.

Oh Weaver, that was a fantastic post about two very special, professional women. I know it was probably not their choice, but I do find it quite inspiring to read stories about women from that era who made their own way in the world. Perhaps it helped that they had each other.
And the photographs are fantastic.

My father was a bespoke man, having all his shirts, sports jackets and shirts made for him, mostly by Harvie and Hudson, Jermyn Street. A hallowed enclave of masculinity, as I remember it.

I love this. I think of your two aunties as characters out of Alice Munro, perhaps, although on the original side of the pond. Much story beneath the very nice story you tell.

I would bet your Aunties could tell many a story about that workroom and the clientele. They look quite beautiful in their suits.

What a lovely story Weaver, and all the more so because it is true. It is a bit naughty when someone cashes in on another's years of building up a reputation. I am sure that your aunt's suits were beautifully made and probably worthy of a Savile Row label. Their work must have helped compensate for being denied the choice of marriage and a family.

A lovely story from my era...beautifully told.

Oh! I loved that story. I could almost smell that work room! I could see it so vividly in my mind. I smiled the whole time that I was reading it. How wonderful to have a skill, a trade like that. True craftswomen.

In answer to your question, the berries on my Christmas Pud are beautiful glass (well I think they're glass!) beads. I have to purchase them as bracelets and take them apart.

And before I forget, yes you must pop in for a cuppa when you are next up my way. I work every weekday morning, but my afternoons are usually free. Unless I'm covering for holidays etc.

Can't promise scrummy strawberry scones and cake like yours, but you're more than welcome to a rummage in the biscuit tin!

A wonderful, evocative piece of place and time and your two aunts. Not that this old river bear will ever have—or have need of—such finery…though it would certainly be something to desire.

oh weaver what a beautiful rich telling of a time past and yet very much alive inside your words. thankyou so much for this wonderful story!!! steven

Speaking as one of the tailors that Savile Row object to so strongly, I must say I found that a very touching story. I founded my business so that we might have a return to how it was back then with bespoke tailoring being affordable to all. Alas, with the price of cloth and rent as they are, it is no longer possible to manufacture in England and the atmosphere you so eloquently describe is now only to be found on the Row - with it's accompanying exhorbitant price tag.

I can only echo the views of everyone else about the charm of your story. Your aunts look as if they have stepped out of an Agatha Christie novel.

What a lovely story of the two sisters, thank you, Weaver for sharing that. Have you ever watched House of Elliot? I'm a huge fan of British television and movies - Monarch of the Glen, Ballykissangel, Prime Suspect, Foyle's War, Life On Mars, Hustle - such a nice change of pace from what we see here!

Weaver, What a wonderful tale. I think I would have liked your Aunts. Your story-telling is so enjoyable, the events came to life in my mind's eye. Thank you for such a lovely beginning to my day. Have a happy day.

Wonderful evocative post about your aunts! I'm so glad Golden West remembered "The House of Elliot" TV series... I was digging in my memory banks for that title yesterday...And I'll add my words of encouragement for you to gather some of your pieces and publish them somehow. I'd be on your list of buyers if you did that! The only good thing I have to say about bespoke tailoring is that perhaps it's a good thing that the handwork is so highly valued these days. When one thinks of the wages of yesteryear for people working in that trade, there is a positive note today for the worker bees. Or at least I certainly hope so. Fascinating post from Adam King.

Thank you for all you comments. It is particularly interesting to read Adam King's comments - straight from the horses mouth, so to speak.
Glad you liked the story of my aunts - I shall have to think of another one to tell you.
I love the idea that my two aunts could have come from an Agatha Christie novel - I do love their hair styles. Thanks for showing such an interest.

What a lovely story, Weaver! It reminds me of that delightful series of the House of Elliot. You described the situation very well and vividly!